It’s safe to say that housing benefit has few defenders on any side of the political debate.

All parties agree that spending is out of control and needs to be reined in. The right has ruthlessly promoted the claim that housing subsidises the underserving poor to live in accommodation ordinary workers couldn’t afford. The left responds by saying that it is landlords rather than tenants who are milking the system. Thus Owen Jones writes:

Greedy landlords are fully aware that most cannot afford to pay their extortionate rents. But they also know that the taxpayer will step in and subsidise them with housing benefits… Instead of wasting billions on housing benefit, we could spend it on building housing, creating jobs and stimulating the economy.

What the left and right criticisms have in common is more important than what distinguishes them. Housing benefit exemplifies the gruesome two-step of current welfare debate.

Step two is wishful thinking, as I’ll argue below. Step one is easily dealt with. Look at this chart: 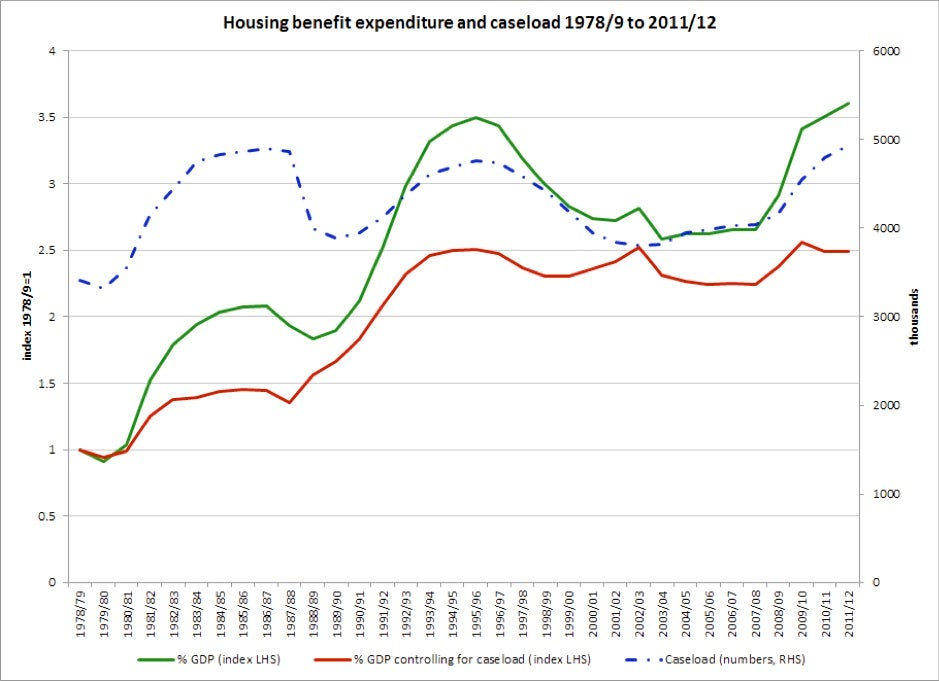 The green curve shows expenditure on housing benefit as a share of GDP, indexed to 1978/9, from that year to 2011/12. (It’s the share of GDP that counts when the sustainability of expenditure is at issue.) Spending now, four years after the onset of recession, is at almost exactly the same level as it was in 1995/6 four years after the last recession. In the intervening period it first fell dramatically as the impact of the early 90’s recession receded, then rose sharply when the global financial system collapsed in 2008/9. There has been no long-term upward trend since the early 1990’s, so the rhetoric of unsustainability is completely misplaced.

The red curve on the chart, which takes out the effect on expenditure of changes in the number of claimants, shows that the recent rise in expenditure is overwhelmingly driven by the caseload (the dotted blue curve). It also allows us to see the impact of the switch from supply-side to demand-side funding during the late 1980s — that is, the switch from directly subsidising social rents and building homes to giving tenants the money to pay higher rents.

This doesn’t represent a change in overall expenditure but a redirection of subsidy to a different channel.1 The impacts of that switch, particularly on work incentives and poverty traps for lower income groups, have been hotly debated, but the point here is that this step change in housing benefit spending doesn’t represent an additional cost to taxpayers (except in the form of any negative impacts on employment). So even in this long-term perspective the notion that housing benefit represents an increasing burden on the Exchequer is wrong.

What about the other item on the charge sheet—that housing benefit expenditure is wasteful because either landlords or tenants are milking the system on a grand scale? Both these claims, if we are to make sense of them, involve similar economic assumptions.

To see this, consider how landlords might be able to raise rents above market level to capture the subsidy—bearing in mind that if rents aren’t above market level, there is no subsidy (left critics have been surprisingly uninterested in demonstrating this). The private rented market is dominated by small-scale, uncoordinated cottage industry operations, so we can rule out the notion that landlords are using market power to drive up rents. (An exception, but a small element in total spending, may be the market in temporary accommodation for people meeting local authority homelessness criteria).

The other possibility would be if tenants were to some extent indifferent to rent levels. That could allow landlords to use price discrimination (charging more to housing benefit claimants) to extract above-market rents from taxpayers. Alternatively, even if landlords didn’t use price discrimination, tenants might choose more desirable (expensive) properties if they weren’t worried about the rent—the government’s main argument for cutting entitlements. Thus the greedy landlord and irresponsible tenant stories turn on the same explanatory mechanism of tenants failing to respond to prices: they differ only in who is said to be extracting the unfair advantage.

Which raises the question: why would tenants be indifferent to rents? The higher the rent level, the more earned income will be subject to punitive marginal tax rates as housing benefit is withdrawn. You would have to suffer from extreme myopia or have minimal expectations of your future earning capacity not to take this into account in choosing accommodation. Add to this that about half of private rented sector claimants were living in their current accommodation before they made their claim, so they would have been making the same tradeoffs as anybody else when they chose where to live.2

Fortunately, all this can tested empirically.

London has the largest private rented sector in the country, a highly mobile population, substantial variations in rents between areas and (although Londoners hate to admit it) an excellent public transport system.

When a model in which the number of private sector claimants in each borough in 2010-11 is measured against (a) the size of the local private rented sector and (b) the lower 25 per cent of local rents, we find the latter “explains” 66 per cent of the variation in caseload between areas. Overall, a 1 per cent increase in rents implies a 1.7 per cent decrease in the number of claimants.3

Given this strong negative relationship between rent levels and private sector HB claims, the notion that landlords are capturing a large part of the subsidy by charging above market rents looks implausible.

This is even more the case when we look at what’s happened in London since the cuts to housing benefit in April 2011. Using the same model with post-reform data, there is no statistically significant change in the relationship between rents and caseload: even quite dramatic cuts to entitlements don’t seem to have made that much difference to the already very strong propensity for higher rents to drive down the number of claimants.

(This isn’t to say there has been no effect from the changes, but that if there has been, it’s small by comparison with what was already happening before they took place.)

At the same time, between 2011 and 2012, rents rose by 8 per cent in London, and they rose most for the type of larger property where the cuts had the most impact on tenants’ ability to pay—rents for three- and four-bed flats have risen by more than 10 per cent. So much for the government’s claims that rents are falling in response to the cuts

Given how much we spend on housing benefit in the private rented sector it would be surprising if there were no landlords taking advantage. But the hard lesson is that this probably has little impact on overall spending levels. Claims from the left that billions are being wasted “subsidising” private landlords are about as convincing as claims from the right that billions are being wasted subsidising irresponsible tenants to live in mansions.

There’s a longstanding debate about the merits of funding housing through demand rather than supply-side subsidy. (For a fair statement of the argument, see Shelter’s report). But suggesting that there’s a free pot of money available for housing investment in the form of subsidy captured by greedy landlords adds nothing to that debate.

If we want more housing investment, we’re going to have to pay for it some other way: perhaps by borrowing as Jonathan Portes has suggested. Taking that route would also have positive impacts on employment, thus reducing expenditure on housing benefit without hitting the incomes of struggling workers. But the welfare reform two-step is a distraction from the real issues, whether you lead with the right or the left.

3 Geek note: all variables in logarithms, all p-values <.01. the results are not driven by multi-collinearity between independent variables.>