One of the key measures in today’s budget was an increase in the personal tax allowance, which will rise from £9,440 in to £10,000 in 2014/15. It was always an ambition of the Coalition to reach 10k before the next election, but they have revealed today that they will get there a year earlier. Taking people out of the tax system has an intuitive appeal if, like the Chancellor, you want to ‘set free the aspirations of the nation’. But what is the actual impact on household incomes?

The red bars in the chart below shows what the distributional impact of the change. While personal allowance rises are often presented as a measure benefitting those on the lowest incomes, in actual fact it is middle and higher earning households that gain the most. Indeed, the lowest earners will only gain 0.05 per cent of weekly incomes from the change. The biggest winners are those earning more than median earnings, who will see their weekly income rise by over than 0.2 per cent. The reason for this is simple – the lowest earning households are less likely to have incomes above the personal allowance anyway, so an increase has little or no effect on them. The highest earners, on the other hand, will often have two earners earning above the personal allowance, so they get the full benefit. 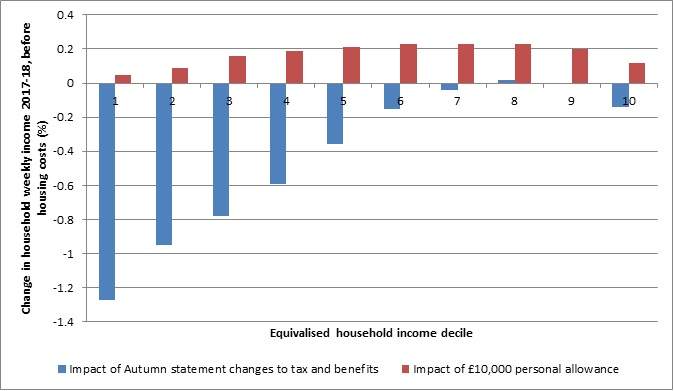 When compared to the impact of the 1% benefit up-rating cap announced in the Autumn Statement, the regressive nature of the coalition’s tax and benefit policies is even starker. The red bars in the chart show the distributional change in household incomes as a result of the reforms announced last December. It is clear the small benefit the lowest earners will see as a result of today’s tax allowance rise does little to compensate for the enormous hit they will take because of real-terms cuts in child benefit, tax credits and a host of other working-age benefits.

The Chancellor wants to do something to help hard-working families, but some of the hardest-working families on low-incomes will see little benefit from today’s announcement on income tax, while at the same time bearing the brunt of the coalition’s cuts to welfare. Looking to the future, with the prospect of even more cuts to come, we have to ask whether it is fair for the poorest to shoulder so much of the burden.