Just a few hours before MPs started debating the coalition’s Welfare Uprating Bill, which will impose a cap of 1 per cent of benefit increases for the next three years, the government finally released its Impact Assessment (IA) of the legislation. 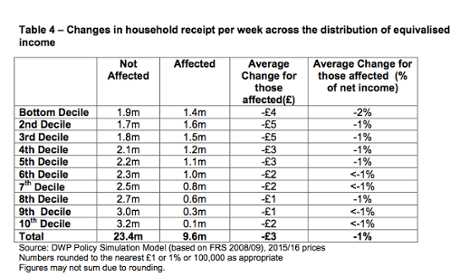 The assessment also shows that, contrary to the government’s assurances, the disabled will be affected. In fact, households with a disabled member are more likely to lose out than non-disabled households (34 per cent compared to 27 per cent). This is because, in the words of the IA, “those who report themselves as being disabled are more likely to qualify for those benefits which are affected by the policy change”. Given this finding, perhaps it’s not surprising that the Department for Work and Pensions waited until the last possible moment to release its assessment.

We also learn that lone parents will lose more than any other family type (£5 a week), since “they have a lower employment rate than average and also often qualify for in-work support”, that women are more likely to be affected than men (33 per cent compared to 29 per cent) and that, in total, 30 per cent of all households will be affected.