Via Tim Worstall, a new NBER paper argues that the massive surge in deaths after the end of communism in Russia may have a simple, single cause: “the demise of the 1985-1988 Gorbachev Anti-Alcohol Campaign.”

There is no doubt that the period between 1990 and 1994 was one of extraordinary turbulence in Russia. The country experienced, in just four years, a rapid and wholesale transition from an almost entirely centralised economy to one of the freest markets in the world. The opportunism of the change was given as an archetypal example of the “Shock Doctrine” by Naomi Klein, in her book of the same name.

One of the key stats cited to prove the upheaval is the astonishing leap in mortality. As the authors of the paper, Jay Bhattacharya, Christina Gathmann, and Grant Miller (of Stanford university) write:

Crude death rates in Russia soared by 40% between 1990 and 1994, climbing from 11 to nearly 15.5 per thousand. By 2009 standards, the decline in male life expectancy at birth (by nearly 7 years, to 57.6) would tie Russian men with their counterparts in Bangladesh, falling short of male longevity in less-developed countries with troubled population health histories (Botswana, Haiti, North Korea, and Yemen, for example). The magnitude of this surge in deaths – coupled with the Soviet Union’s international prominence – has prompted observers to term this demographic catastrophe “the Russian Mortality Crisis.”

The immediate cause of the surge in deaths isn’t economic transition, but a massive rise in alcohol consumption; the types of deaths that increased most were those related to alcoholism, like alcohol poisoning, violent deaths, heart attacks and strokes. Additionally, the deaths were concentrated amongst working age men.

What the authors argue is that, while alcoholism can of course be the result of societal factors, it also suggests that factors more directly related to drinking be examined. Their key prompt comes in the form of the following chart: 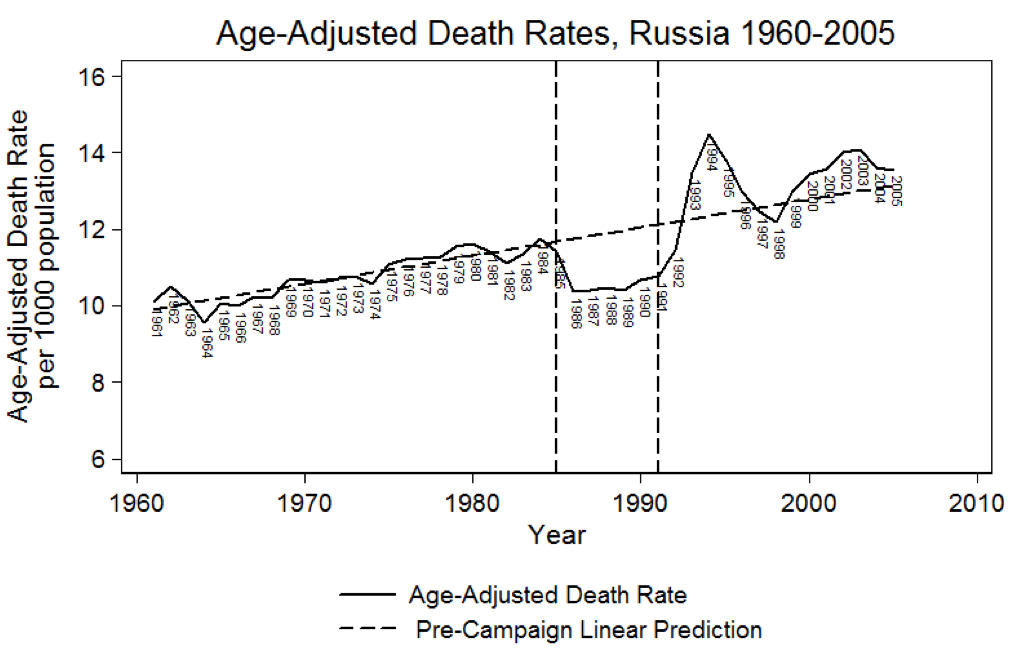 While the post 1990 spike is very real, the corresponding pre-1990 dip is under-explained by narratives which focus on economic upheaval. But it is potentially explained by the success, and then demise, of the USSR’s “Measures to Overcome Drunkenness and Alcoholism”, which “ushered in the country’s most stringent anti-alcohol policies since its 1919- 1925 prohibition”.

The actual measures are fascinating, especially in the context of today’s debate around minimum pricing. They addressed both supply and demand, by:

These measures had a huge success; although the official statistics probably overstate the effect, due to the difficulty of accounting for moonshine production, they show a drop in sales of 50 per cent. That led to a continued decrease in death rates: 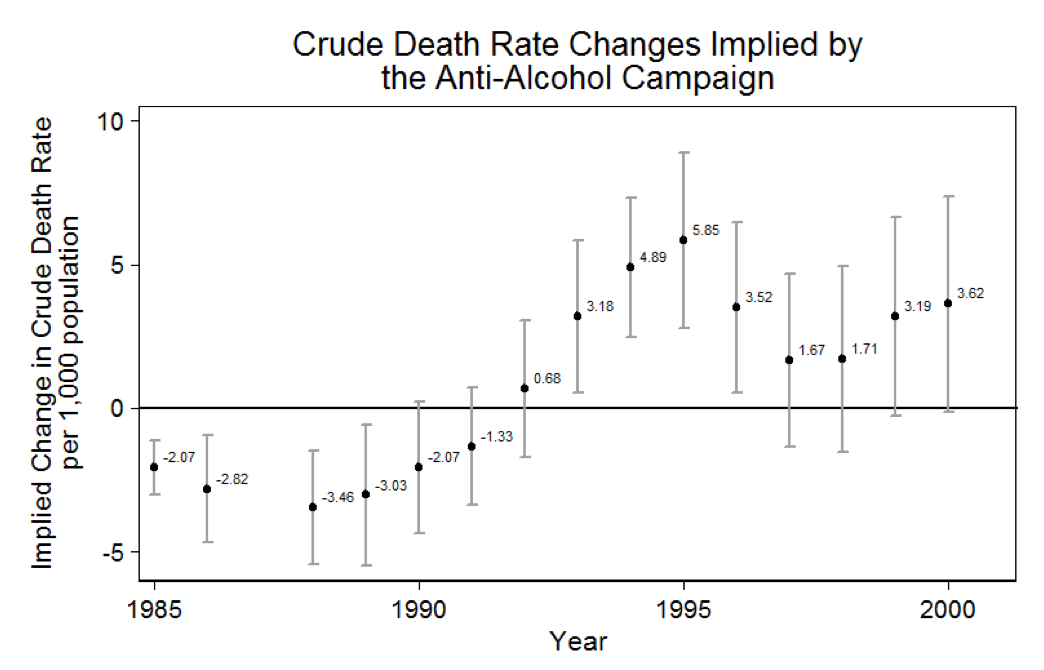 Importantly, the authors argue that the measures would take a while to unwind once the program ended in 1988, explaining the lag in time between its end and the beginning of the mortality spike.

Not every extra death is explicable by this factor; but the authors estimate that 2.15 million people in the mortality crisis died, not as a result of the larger crisis, but due to these measures being repealed.