Business Insider‘s Joe Weisenthal highlights some good news to start the week. Projections of US CO2 emissions in 2030 at the lowest they’ve been in five years, according to the 2013 Annual Energy Outlook, the long-term predictions of the US Energy Information Administration.

This chart, from the EIA, shows the changes: 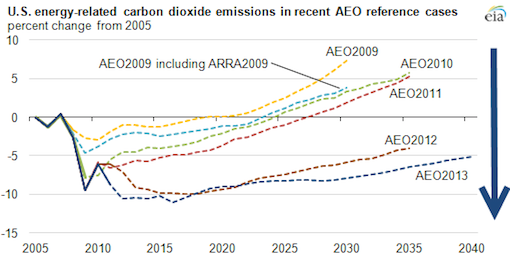 The administration gives five reasons for the decline in expected CO2 emissions between 2009 and 2013:

Sober Look ties the news to the continued failure of the US to enact a successful cap-and-trade programme, writing:

One of the reasons for the failure of the so-called cap & trade program in the US (other than political), has to do with the fact that carbon emissions have declined on their own – without any caps. And why would a company pay for an emissions “allowance” if it can stay under the cap without it. Of course politically it made no sense to force companies to pay at the time when they were emitting materially less carbon on their own. Furthermore, there was no incentive for investors to hold these contracts because each year the long-term projections for carbon emissions in the US have declined.

That analysis is undoubtedly correct; the US cap and trade system was predicated on limiting the growth in emissions, and if they are naturally falling then clearly that limit will be moot.