The Joseph Rowntree Foundation has a new report out putting to bed the myth of “cultures of worklessness”.

It’s a powerful narrative, frequently voiced by members of the public, and occasionally – shamefully – repeated by government ministers who ought to know better:

For too long, in too many deprived areas of the country, there has been a destructive culture that ‘no-one around here works’.

… there are four generations of families where no-one has ever had a job. – Chris Grayling, Minister for Work and Pensions, BBC ‘Newsnight’, 15 February 2011

The most extreme version of the claim – that there were four generations who have never worked (in other words, the version spread by the Minister for Work and Pensions) –  seems to be entirely unsupportable. The JRF write:

Despite dogged searching in localities with high rates of worklessness across decades we were unable to locate any families in which there were three generations in which no-one had ever worked. [Emphasis theirs]

The foundation was assured, at least, that there were families with two generations of worklessness, and even made an infographic detailing the evidence that they exist – even if they do make up just 0.09 per cent of the working population: 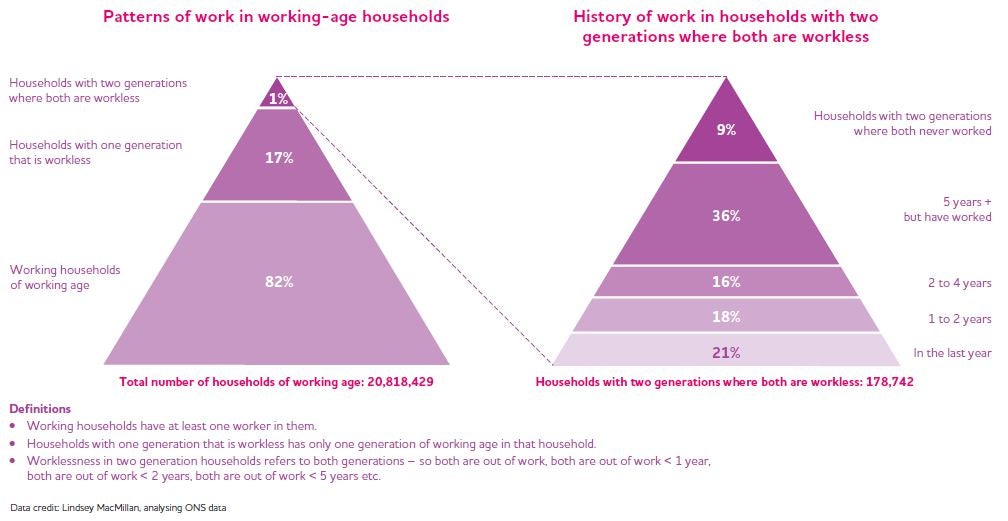 Unfortunately, even finding any of those families was tricky. In the end, the report had to settle for interviewing families with one generation in long-term unemployment, and a second which had never worked. With these, vastly reduced, criteria, they managed to find twenty families to interview about why they were in that situation. And what they found is that across the generations, people stressed the social, psychological and financial value of working for a living:

“It gives your whole day some sort of order. It’s like a regimental thing … whereas if you are just sat around it can be frustrating and awful, really.”

“Of course it would be important to me [to have a job], especially when I’m only on £95 a fortnight. God, to have a wage that would be £95 a week; I would feel like a millionaire!”

The research thus argues that, in so far as there is intergenerational worklessness, it is not due to a “culture” or “inherited attitude”, but rather due to the calcification of long-term unemployment, and the existence of employment black holes.

that politicians and policy-makers need to abandon theories – and policies flowing from them – that see worklessness as primarily the outcome of a culture of worklessness, held in families and passed down the generations. If these cultures cannot be found in the extreme cases studied here, they are unlikely to explain more general patterns of worklessness in the UK.

We doubt the cabinet are listening.