The Chancellor’s Autumn Statement tomorrow will likely bring more economics by a thousand cuts, with the least well off and welfare budgets again under assault. And there’s to be no let up in the tax regime’s unfairness.

Lacking any underlying rationale and subverted by habitual expediency and vested interests, the tax system can legitimately be characterised as inequitable and inconsistent. The Chancellor isn’t helping.

Taxes for companies and the wealthy are being reduced, notwithstanding the deficit and their already favourable treatment. Meanwhile taxes for less well off continue to go up. These are against a backdrop of marked economically and socially damaging income and wealth inequalities.

National Insurance, the 25.8 per cent tax on employment, is only paid on earned income. Unearned earnings then often have lower tax rates as well, particularly for dividends and capital gains.

Deductions and allowances then go from limited to lenient across the spectrum from earned income through unearned income to company earnings and capital gains. The returns from wealth can also take advantage of extensive legitimated means of avoiding tax.

All of which is ignoring wealth’s unique socio-economic primacy and ability to generate returns again and again from ownership alone. Wealth (capital) itself is all but untaxed in the UK

Progression is overwhelmingly concentrated on earned incomes and in the bottom half of the income, let alone wealth, spectrum.

Tax rates for earned income are only really progressive between bottom and middle incomes, and that’s being reinforced by the Chancellor. Top rate income tax has already been cut from 50 per cent to 45 per cent, a regressive tax giveaway to the highest earners of £1.8bn a year. Meanwhile, those earning between £30,000-150,000 p.a. have been squeezed by a combination of increases in NI and further reductions in higher rate thresholds (albeit partly offset by the initial tax-free allowance increasing). 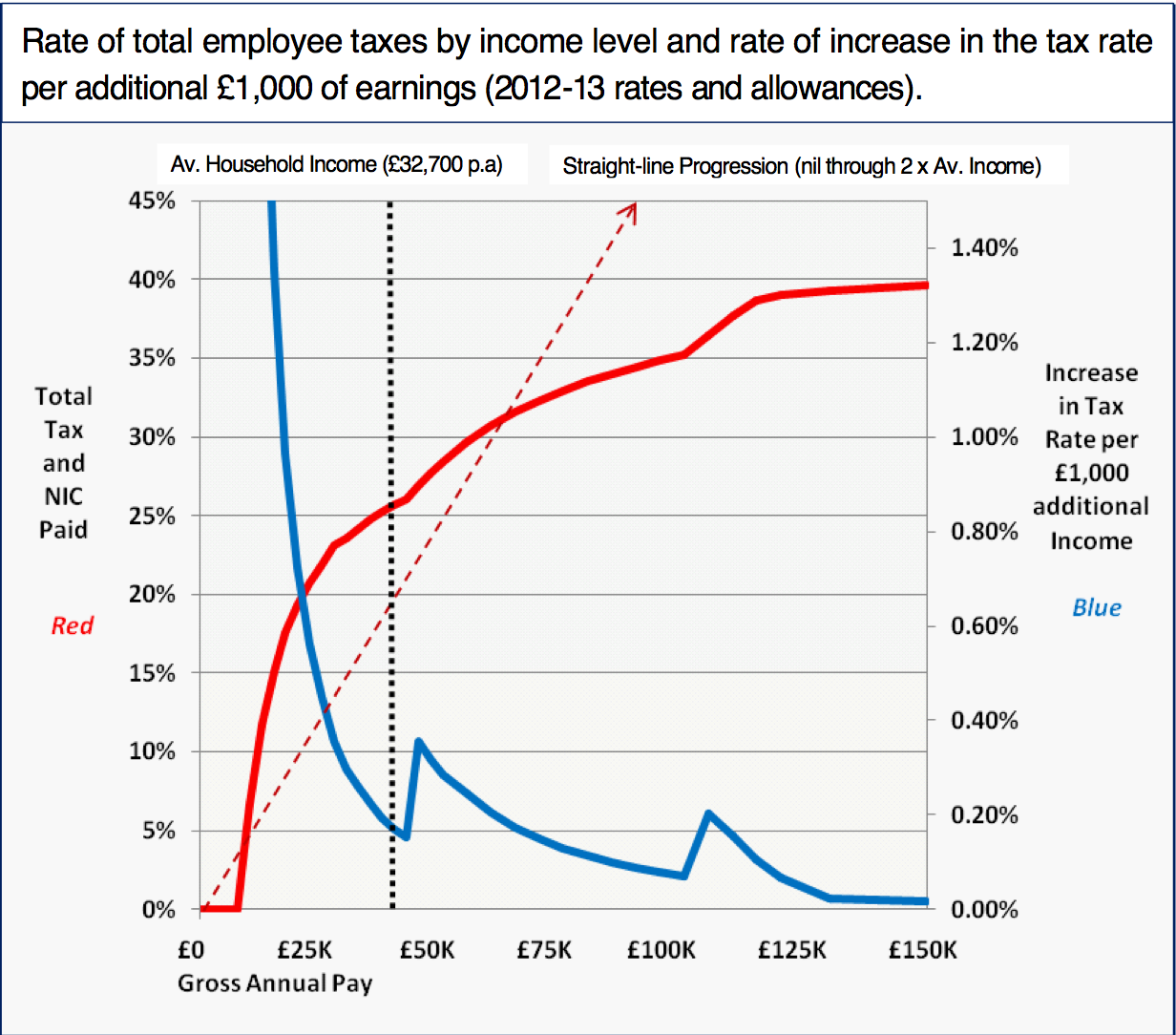 At the same time the threshold for higher tax (the 40 per cent rate) is to be reduced further to £32,245 in 2013-14. This is a fall of over 20 per cent in real terms since 2010-11, pushing yet more low to middle income households into higher rate tax. This is the real squeeze in the middle (again, notwithstanding the increased Personal Allowance).

As incomes and wealth increase, progression is further flattened and distorted by the increasing benefit of allowances and deductions; the greater proportion of earnings benefiting from more favoured rates and treatment; and greater use of tax avoidance. All the while the focus remains exclusively on just income, ignoring wealth.

Company earnings are particularly favourably taxed compared to other types of earnings. They are then taxed at significantly lower rates, with no increased rates for greater profits. And many companies, particularly the larger ones, make extensive use of legitimated tax avoidance, particular offshore status and profits/costs transfers. The end result is an average effective tax rate of just 11-12 per cent on company profits made in/by the UK.

The Chancellor is now steadily cutting headline corporation tax from 26 per cent in 2010-11 to 22 per cent by 2014-15 – a tax giveaway of over £800m a year (cumulatively £4bn a year by 2015-16). The amount of tax collected will therefore remain nominally flat and fall in real terms for at least five years even with the hoped for recovery. At 2.4 per cent of GDP this is one of the lowest company tax contributions among all developed economies.

As with earlier cuts in company taxes, however, these cuts will not in fact deliver the hoped for improvements in output, economic performance or growth. Nor will they make a significant difference to the UK’s competitiveness.

Company taxes also have their own inequities. Far from being progressive to offset the advantages of size and market power, corporation tax ends up highly regressive in practise. Many of the top 100 UK companies pay an effective rate of under 5 per cent and quite a few nothing at all; and the top 5,000 about 11 per cent; whereas the average SME pays 80-85 per cent of the headline tax rate.

While the Chancellor is reducing taxes for larger companies, the 20 per cent small company rate and marginal relief for SME businesses have been frozen – reducing the difference between the smallest and largest company to at maximum 2 per cent. There are equally marked variations between types of business. The tax regime generally biases heavily against substantively productive activities, particularly those involving employment, and in favour of rent-seeking ones.

These discrepancies in turn overlap with how much companies use tax avoidance. This gives some a market as well financial advantage; while putting others at a disadvantage – particularly domestic UK companies trying to play with a straighter bat.

A recurring theme in the unfairness and inequalities of UK tax is widespread avoidance.  This not primarily about clever schemes and loopholes, but the currently built-in legitimating means of mitigating and avoiding tax.

While the Chancellor is closing some blatant loopholes, the built-in mechanisms for avoidance have been surreptitiously reaffirmed. The entire edifice of differential tax rates and treatment, company sheltering of profits, offshore ownership, residency statuses, trusts, transferring of profits etc continues unabated.

Conservatively the country is missing out on £40-45 billion in directly avoided company and personal taxes and over twice as much again in currently legitimated tax “mitigation”. Even if only some of this was recouped, we are talking substantial sums – enough to make a significant dent in the public finances.

Meanwhile the shortfall leaves all the more to be met by those still fully caught in the tax net: it takes the income tax from two million average households to replace each £10bn lost through avoidance.