Tomorrow marks the start of the first Living Wage week. It is tangible proof that, 11 years after a small broad-based East London community alliance revived an idea first forged in the industrial heartlands of 1870s Britain, momentum for increased living wage coverage continues to gather pace.

And with good reason: at a time when powerful forces are bearing down on wages at the bottom end of the labour market, living wage campaigns have delivered tangible gains for thousands of low-paid workers. More widely, living wage initiatives have served as a powerful rallying cry against endemic levels of low-paid work, highlighting the power of social norms in challenging a low-pay, low-productivity economic model that is anything but pre-determined.
Yet for all the success of the living wage campaign relatively few workers have secured a higher wage as a result of a living wage initiative. For example, there are an estimated 651,953 workers in London earning less than the London Living Wage, yet only around 10,341 London workers won a living wage in the six years between 2005 and 2011. This is not a cry of despair, simply a call for realism about the role that living wage initiatives can play in tackling our reliance on an extensive pool of low-paid labour and for targeting efforts where they will be most effective.
Of course, the latter would be far easier if there was greater transparency around low-paid work. There is therefore a powerful case for amending the UK Corporate Governance Code to require listed companies to report on how many of their employees receive less then a living wage – as called for in the final report of the Resolution Foundation’s Commission on Living Standards. At a stroke such a move would begin to alter our tolerance of endemic levels of low pay, laying the ground for further gains.
And we know that further progress is possible. Our estimates suggest that for large private sector companies in key sectors like banking, construction, food production and communications – where roughly a million people in total work below living wage rates – the costs of paying a living wage for all directly-employed staff are affordable at around 1 per cent of the firm’s wage bills.
Of course, different companies will be better able to absorb these costs than others and the introduction of a living wage pay floor will be more challenging for companies in the major low-wage retail sectors (increases in wage bills of between 4.7 and 6.2 percentage points) but progress is still possible. 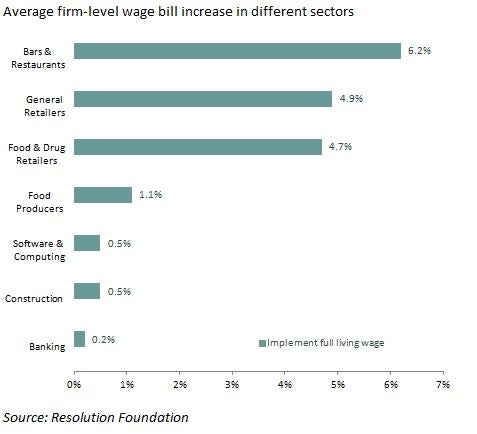 It is also imperative given the growing awareness that the public purse can no longer sustain the high cost of the UK’s reliance on 5 million workers – 1 in 5 employees – who earn above the legal minimum but below a living wage. It is not just low-paid workers and their families that bear the cost of low-paid work on this scale in strained budgets and diminished life chances. Taxpayers also pay to the tune of around £4 billion a year in in-work support for low earners.
With few, if any, believing that the growth in tax credit support that occurred over the past decade can be repeated in these fiscally straitened times there is an urgent need to start developing an ambitious policy agenda to tackle low pay at source. For any policymaker serious about doing so living wages are an integral, if only partial, part of the solution.
But there is a very real need to start matching words with deeds. Over the past decade politicians from across the political spectrum have competed to associate themselves with the idea of the living wage, safe in the knowledge that the voluntary nature of living wage agreements and their partial coverage made doing so almost consequence-free. With the role, rationale, strengths, limitations and policy potential of living wages now under increased scrutiny the window for endorsement devoid of decision is beginning to close.
The transition from approval of living wage initiatives to concrete policy ideas to support their proliferation will not be easy. Yet there is a path for policymakers between inaction and reaching for a legislative solution in the form of a statutory living wage which few living wage advocates would endorse. That path not only involves fostering greater transparency around low pay but also thinking about the use of central and local government’s purchasing power and how the notional savings in state support that would accrue from more extensive living wage coverage might be used to help firms transition to better business models. None of this will be simple. But the alternative of not matching words with deeds is no longer a justifiable option at a time when we need wages to do far more of the heavy lifting if the living standards of low earners are not to decline rapidly.
Matthew Pennycook is senior research and policy analyst at the Resolution Foundation