In 1942 Beveridge set out a plan for a system of social security which would be free of the stigma associated with earlier forms of public assistance.

Seventy years later, it would be hard to argue that benefit stigma has disappeared. On the contrary, outlandish slurs against benefit claimants as a group have become an accepted part of the political language, and the default setting for public attitudes is widely seen as one of suspicion and resentment. As one disabled claimant described it:

There’s that awful feeling that people are watching you… even just your neighbours, because there is just this feeling of just, sort of unpleasantness.

An unemployed claimant sums up the dominant public view of people on benefits:

Those quotations come from focus groups we conducted alongside a specially commissioned poll and analysis of media coverage for our report “Benefits stigma in Britain”, commissioned by the charity Elizabeth Finn Care. Our aim was to provide a map of stigma as it exists today and to understand the factors behind it.

One of the key findings from the survey is that British people do not generally believe that claiming benefits is something that people should be ashamed of – only a small minority agree strongly when asked, “would you yourself be ashamed to claim benefits?” (About 10 per cent). It is not benefit receipt itself which attracts stigma, but beliefs about how “deserving” claimants are – how great their need is, how responsible they are for their situation, whether they have worked in the past or will work in the future.

But how do members of the public, including benefit claimants themselves, arrive at opinions about how deserving claimants are in general? It is sometimes assumed that views are a transparent expression of personal experience – as when politicians uncritically retail grievances against claimants they have heard on the doorstep. Alternatively, negative attitudes are sometimes written off as an expression of pure prejudice or ideology. Both of these approaches ignore the role that second-hand information is likely to play when people make judgements about how deserving claimants are.

To see how important secondary sources of information such as the media can be, consider this finding from our survey. We asked claimants of sickness and disability benefits how visible their conditions were in a range of social contexts – being seen in the street, meeting someone properly, knowing someone quite well and so on. Only 21 per cent of claimants said that their condition would be obvious to someone in the street.

This indicates just how thin the information available to assess deservingness can be, which will tend to make information from other sources more important. So what sort of information about claimants do people receive from the media? Using a database of 6,600 national press articles between 1995-2011, we quantified the use of language about such aspects as “fraud” or “need”, and the appearance of specific themes such as “never worked/hasn’t worked for very long time”, “better off on benefits” and so on.

Perhaps the most striking finding was an extraordinarily disproportionate focus on benefit fraud: some 29 per cent of news stories across all titles referenced fraud over the period. Bear in mind that DWP’s estimate of fraud across all benefits is 0.7 per cent. We also looked at the sort of stories which referenced fraud: not surprisingly a large share were tabloid stories based on individual cases, but perhaps more surprisingly, a large majority originated in the Westminster policy process – stories based on statements by ministers and MP’s, select committee reports, statements from think-tanks and pressure groups and so on. If the UK media seems to have a strange obsession with benefit fraud, this reflects the obsessions of the political class.

It seems that the disproportionate focus on fraud in the press affects the public’s perceptions of deservingness, because people supplement the limited information from direct experience with information derived from the media. In our survey we asked respondents to estimate how many claims were outright fraudulent. This showed the British public believes that one in four out of work claimants is committing fraud – and this seems highly consistent with the level of media coverage of benefits. There is also a striking relationship between the amount of news coverage of fraud in particular titles and the estimated fraud levels among readers of those titles, illustrated in the chart below. 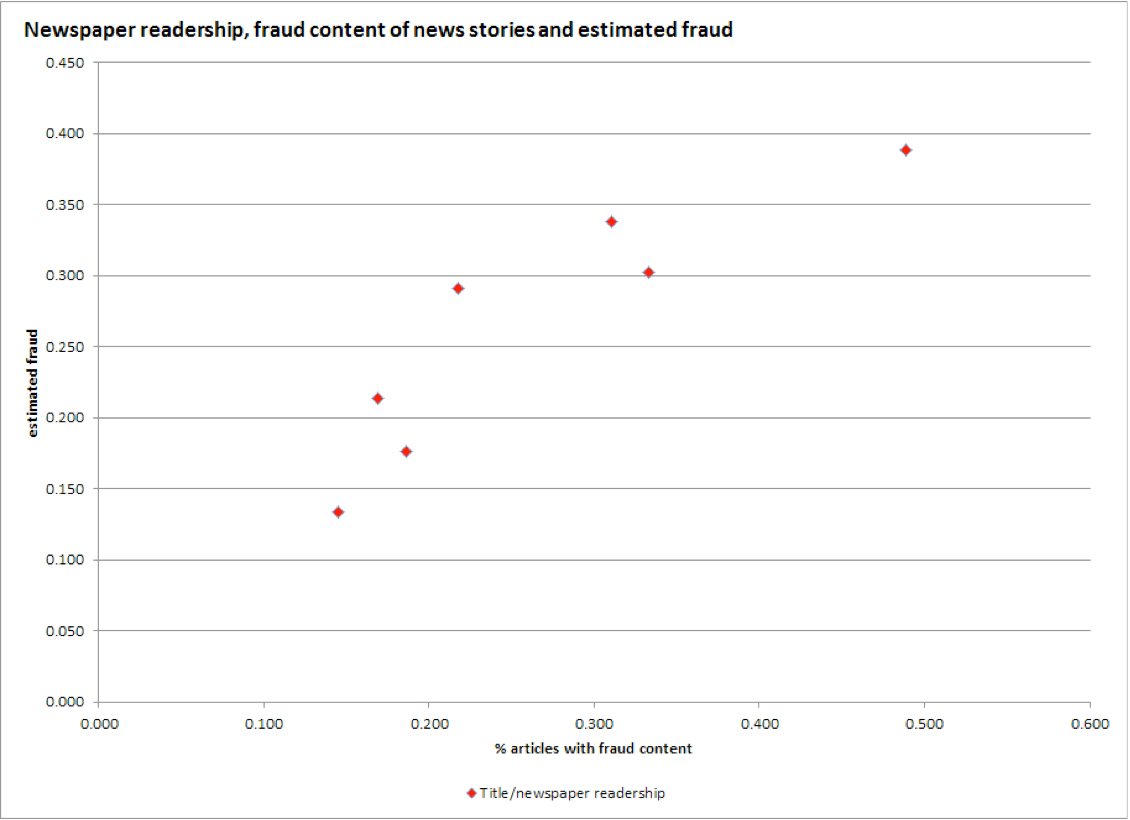 This brings us back to our starting point: it is perceived deservingness which drives benefit stigma, and public discourse around social security in the UK seems almost to be designed to make claimants seem undeserving. This is not just about fraud, but also about other sources of “undeservingness”. In fact, over recent years fraud has become less dominant in critical coverage of benefits, yielding to a language of “non-reciprocity” or “scrounging” (terms such as “handout”, “feckless”, “something for nothing”). We find similar trends in the content of articles: in more recent years (post-2003) the press has devoted somewhat less space to fraud and a lot more to people who (it is held) shouldn’t be claiming for reasons other than fraud. We also see significant increases in the use of such well-worn stigmatising themes as large families, anti-social behaviour and claimants who have never worked. 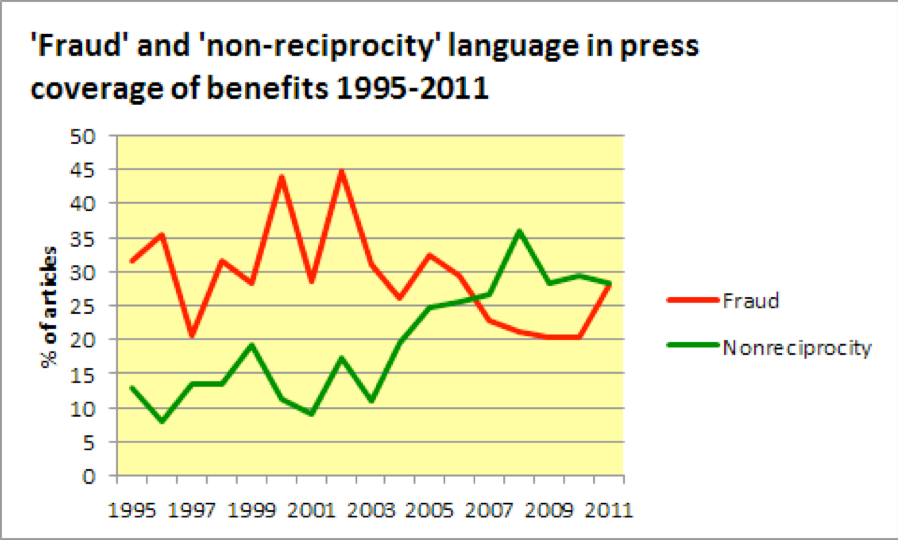 We believe the report offers strong evidence that the public discourse about welfare has an impact on the public’s beliefs about benefit claimants – including the beliefs of claimants themselves, who in our focus groups were keen to distance themselves from “scroungers”. And in the case of benefit fraud, the evidence suggests that it is the politics of welfare which drives disproportionate press coverage.

A particularly worrying aspect is that there now seems to be a feedback loop between politics, media coverage and public attitudes: over the last three years politicians of all parties have sought to calibrate their statements to reflect what they say members of the public have told them (call it the “Gillian Duffy effect”).

In other words, the public discourse of welfare in the UK seems to be caught in a vicious circle. That was an eventuality Beveridge never anticipated when he set out his plan for a stigma-free social security system.