With the Tories preparing to gather in Birmingham, the Labour attack machine has sprung into life with the launch of a new poster and a borrowing counter. Following her Q&A with Andy Burnham earlier this week, my colleague Caroline Crampton revealed that Labour was planning a parody of the famous “airbrushed” image of Cameron – and here it is.

The line “I’m cutting the NHS” is based on Treasury figures showing that since 2010, health spending has fallen from £105,073 million to £104,333 million in real terms, while the line “not the deficit” is based on the most recent borrowing figures from the ONS, which showed that borrowing so far this financial year was 21.8% (£10.6bn) higher than in the same period last year.

This means that in the first five months of the year the UK was borrowing:

In response, we can expect the Tories to point out that they have reduced the deficit by a quarter since coming to office (from £159bn in 2009-10 to £119.3bn in 2011-12), while arguing that the NHS figures are merely the result of an underspend, not a deliberate decision to cut.

But while George Osborne may have a good story to tell on the deficit at the moment (polling found that voters were more inclined to support the coalition’s austerity measures when told that annual borrowing had fallen by a quarter), the disappearance of growth means that this trend will not continue. Forecasters expect the government to miss its deficit target for this year (£119.9bn) by as much as £30bn. For the first time since Osborne entered No. 11, borrowing is set rise in annual terms, a significant blow to his political narrative of “balancing the books”. By 2015, the Tories hope, the situation will have improved, but for now, this is a powerful attack line for Labour. 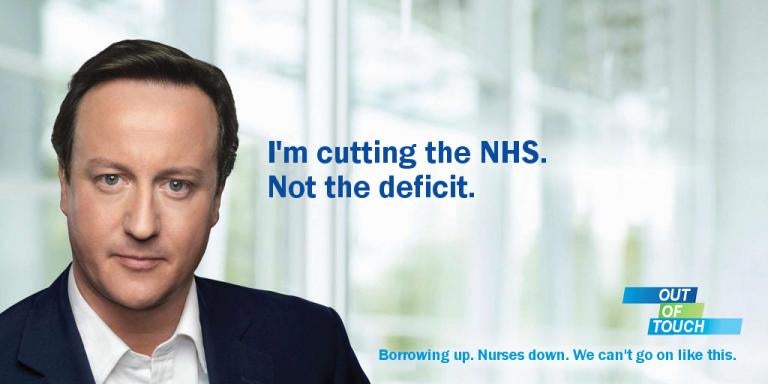