Mitt Romney delivered a knock to his campaign last night after he said that Barack Obama’s voters were the 47 per cent of Americans who are “dependent on government”, do not pay tax and “believe that they are victims”.

He has since described his comments as “not elegantly stated” and “off the cuff”, but hasn’t retracted them: leaving untouched his picture of 47 per cent of America as tax-avoiding scroungers.

The most obvious spot-the-difference with this picture is that nearly every American in work pays many forms of tax – including social security tax, petrol tax and sales tax. The rest are mostly looking for work, falling back on part time jobs. The tax Romney is talking about is income tax: the “47 per cent ” number comes from the Tax Policy Centre, which broke down the statistic to find that half the number fall below the poverty threshold required to pay the tax, and the other half are entitled to bypass it, because, for example, they are pensioners. The New York Times summarised the analysis:

It found that about half of the households that do not pay federal income tax do not pay it because they are simply too poor. The Tax Policy Center gives as an example a couple with two children earning less than $26,400 a year: The household would pay no federal income tax because its standard deduction and other exemptions would simply erase its liability.

The other half, the Tax Policy Center found, consists of households taking advantage of tax credits and other provisions, mostly support for senior citizens and low-income working families.

Romey’s 47 per cent remark touches on a truth, but is not one. These are not people shirking their tax responsibilites, but people who are not and should not be required to pay income tax in the first place.

The Tax Foundation have published a map showing where the 47 per cent live (via Business Insider) – and it’s the red states. Most of them come from a Republican base: of the 10 states with the highest proportion of non-income tax payers, nine are Republican. 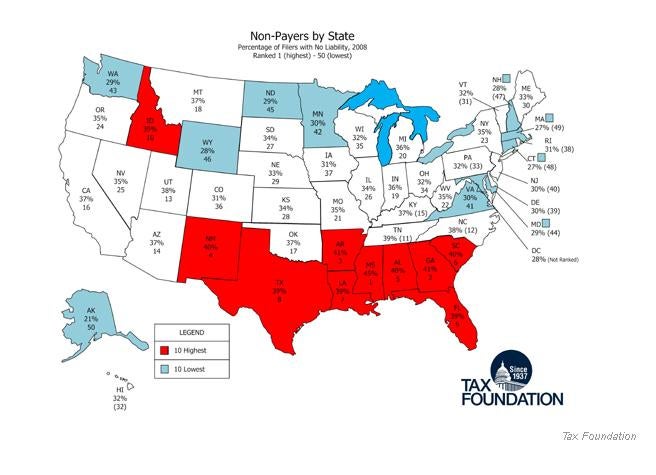