The Washington Post‘s Dylan Matthews highlights a new NBER working paper (£) by Duke University’s Nir Jaimovich and the University of British Columbia’s Henry E. Siu which examines why “jobless recoveries” have become the norm in the US after recent recessions. The short version is that it’s all about the robots.

The history of the US labour market since the 1980s has been one of “job polarisation”, the authors argue:

[E]mployment is becoming increasingly concentrated at the tails of the occupational skill distribution. This hollowing out of the middle has been linked to the disappearance of jobs focused on “routine” tasks – those activities that can be performed by following a well-defined set of procedures. Autor et al. (2003) and the subsequent literature demonstrates that job polarization is due to progress in technologies that substitute for labor in routine tasks.

At one end of the market are non-routine cognitive jobs, “such as physicians, public relations managers, financial analysts, computer programmers, and economists” (and, one would hope, journalists), while at the other end are non-routine manual occupations “including janitors, gardeners, manicurists, bartenders, and home health aides”. Polarisation of the labour market comes from technological improvement replacing people in routine jobs, both manual and cognitive – “secretaries, bank tellers, retail salespeople … dressmakers, cement masons, and meat processing workers.”

The classic victim of mechanisation is the factory worker, but it actually hits a far more varied cross-section of careers. Think about automated phone trees replacing secretaries, self-checkouts replacing retail workers, or Oyster cards obviating the need for ticket sales on the London Underground. In fact, according to the Council on Foreign Relations’ Edward Alden, manufacturing itself has largely reached maximum automation already:

In itself, this technological change is obviously not something to bemoan – it represents society getting more productivity out of fewer people. If we wanted to follow Keynes, we could literally give all of those people replaced by robots permanent paid holidays and the economy would be no worse off. In actual fact, of course, we realise that improvement not as an increase in leisure time, but as an increase in output: the freshly unemployed are sent out to find more employment, and technological growth results.

This would be relatively pain-free if it happened at a slow, background pace, but that’s not the case. Instead, “the decline in routine occupations is concentrated in economic downturns”: 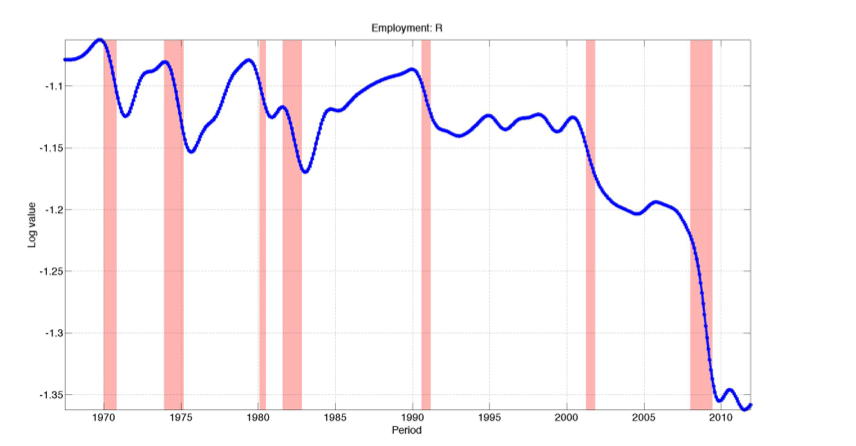 The above chart shows routine employment in the US, with recessions overlaid in shaded pink – and the precipitous decline, and lack of recovery is clear to see.

Gradually, the people who did these routine jobs will filter up or down the skills ladder. The lucky, privileged or smart ones will up-skill and end up in non-routine cognitive work, while the rest will fight for the pool of non-routine manual jobs.

Employment will, eventually, rebound from this slump. As growth returns – helped by the new efficiencies of technological change – there will be more jobs at both the top and bottom of the skills ladder. But as technological progress continues, the safe niches of high- and low-skilled jobs may themselves come under attack.

In May, Martha Gill reported that robots are now writing business stories (which is totally fine), and in June, Rafael Behr wrote about the fear in Downing Street prompted by the rise of the robolawyers:

What happens when the same dynamic creeps up the skills ladder? What are the social and political consequences when white-collar, middle class jobs are increasingly outsourced or done by computers? Plenty of professionals who thought they were immune to the labour market pressures exerted by globalisation will suddenly start to feel very insecure. This is a change that could make itself felt easily within a decade.

What’s strange about the whole thing is that, viewed from a macroeconomic point of view, this ought to be good news. If ever fewer people can create ever more “stuff” (be that widgets, legal documents, or business reports), then the potential is for everyone to be better off. The sad reality, of course, is that in the UK and US, the attitude is largely a laissez-faire rejection of the state’s responsibility to smooth over the turbulence of structural shifts. But as ministers start to see people like them suffering the same changes that their constituents have for three decades now, there is the chance that real change may finally be possible. There have been attempts to tackle what such a change would mean, from nef’s call for a 21 hour week, to the Green Party’s suggestion of a Citizen’s Income. Or maybe its just more, better targeted, and higher quality opportunities for, and support during, retraining which are needed.

Either way, we’ve got until the next recession to get some plans in order, or we will have to go through the same routine all over again. And when the robojournalists come for me, I want an exit strategy.

A commenter is concerned about the fact that the above chart uses an unfamiliar y-axis.

The graph is presented as the log value of the employment rate for routine industries, defined in the paper as: