Austerity in Spain has led to political strife which shows no sign of slowing down. 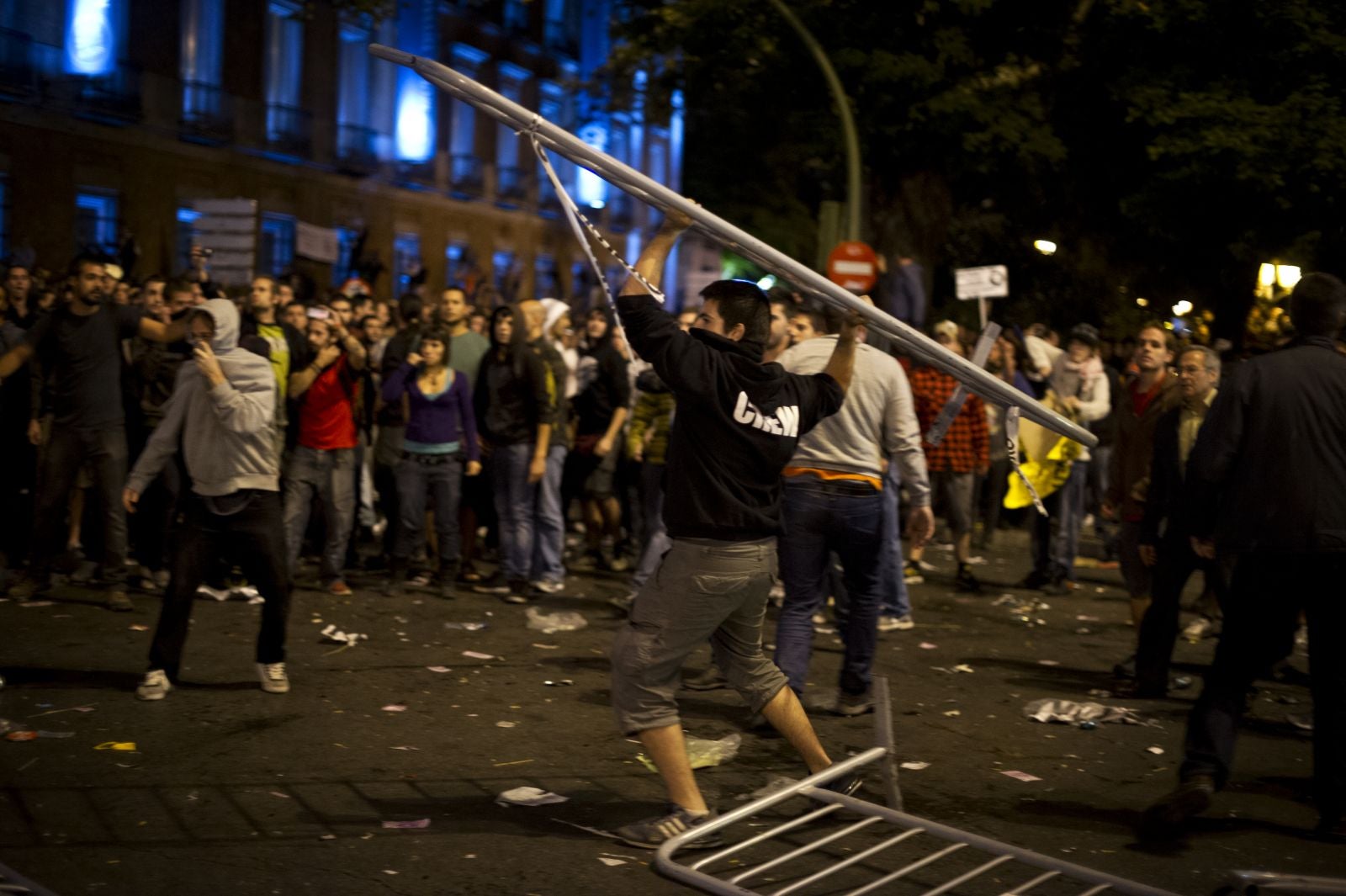 In Madrid, protests on Tuesday night turned violent, as police fired rubber bullets at demonstrators and charged crowds. 32 people, including some police officers, were injured by the clashes, and many were arrested. 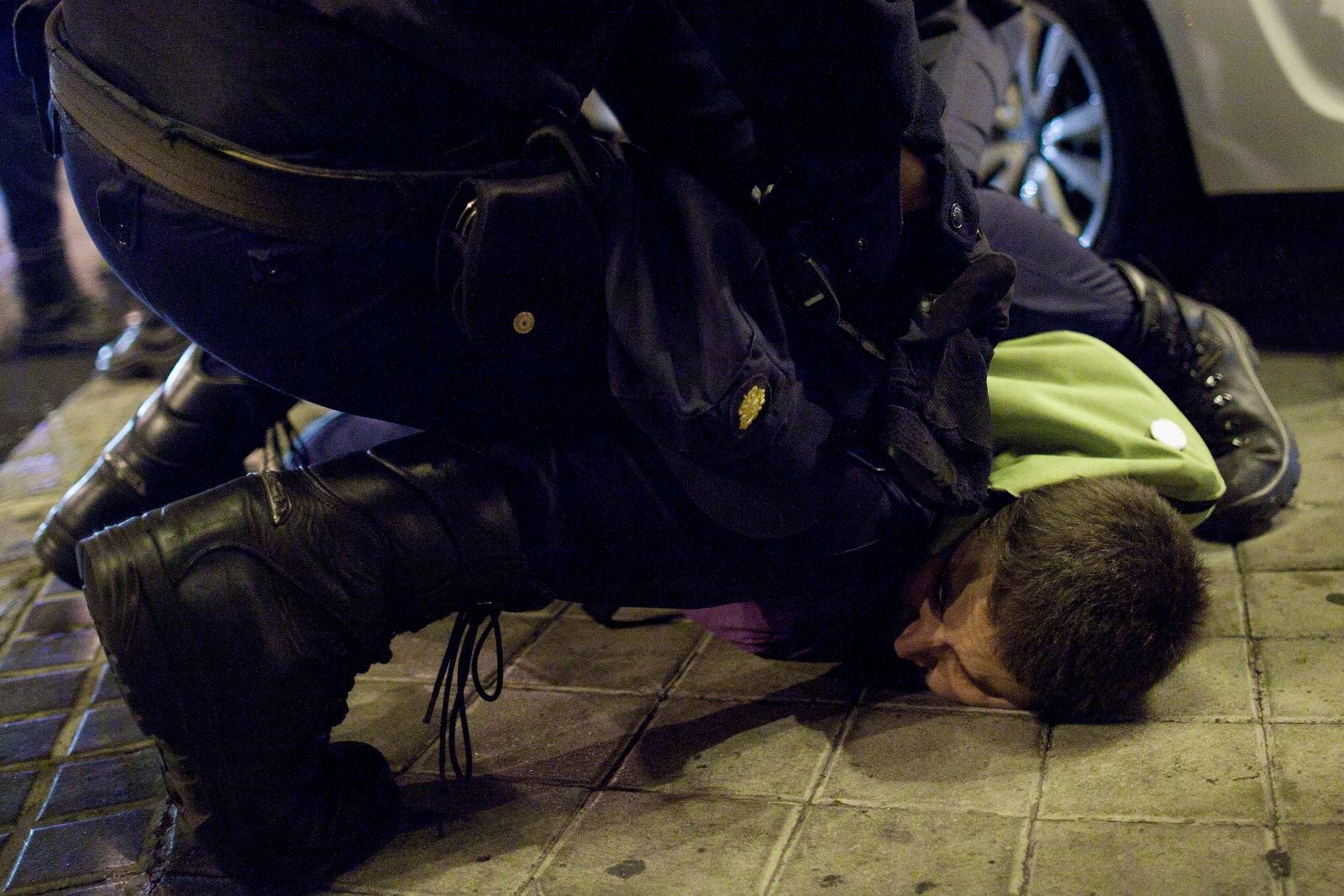 The protest had been planning to physically surround the parliament, but when it overran its 9:30pm deadline, police moved in. The demonstrators are demanding the resignation of the government and the king – who has historically stayed less clear of Spanish politics than our monarchy has of British – and want the constitution to be rewritten. 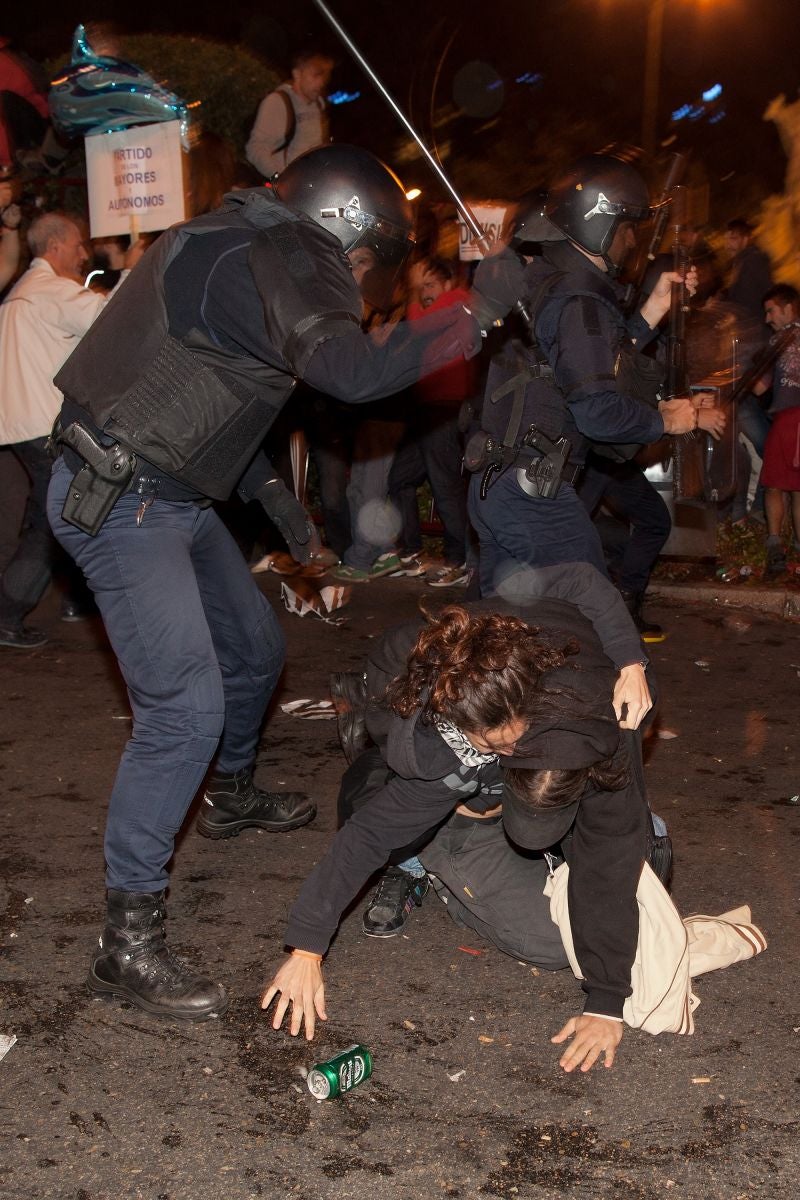 The actions of the police came under fire, with protesters complaining that police officers hid their badges, as well as using excessive force. But the protesters weren’t exactly non-violent themselves, as this widely shared video of a police-officer getting a rather savage beating shows (from 1:10):

The anti-austerity protests are unlikely to go away any time soon. Rajoy shortly has to present his budget to the legislature, and while the protesters have a strong idea of what they want to see, the international community demands a different sort of “credibility” – and Rajoy can’t please both at once. 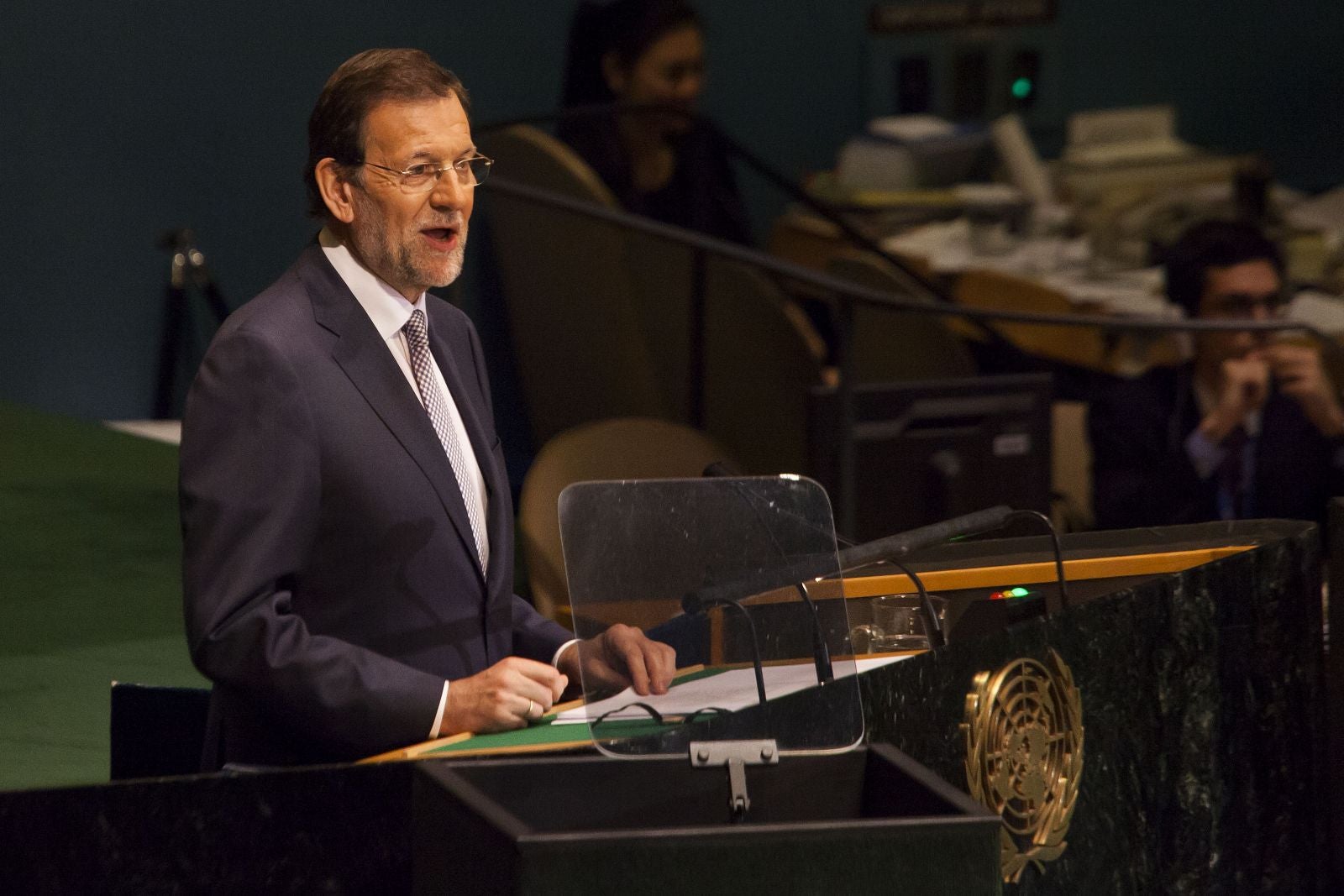 At the same time, a second crisis is erupting in Catalonia, the independently-minded region in the North-East of Spain. The regional government has announced snap elections on 25 November, two weeks earlier than expected, and is also planning on holding a referendum on independence. 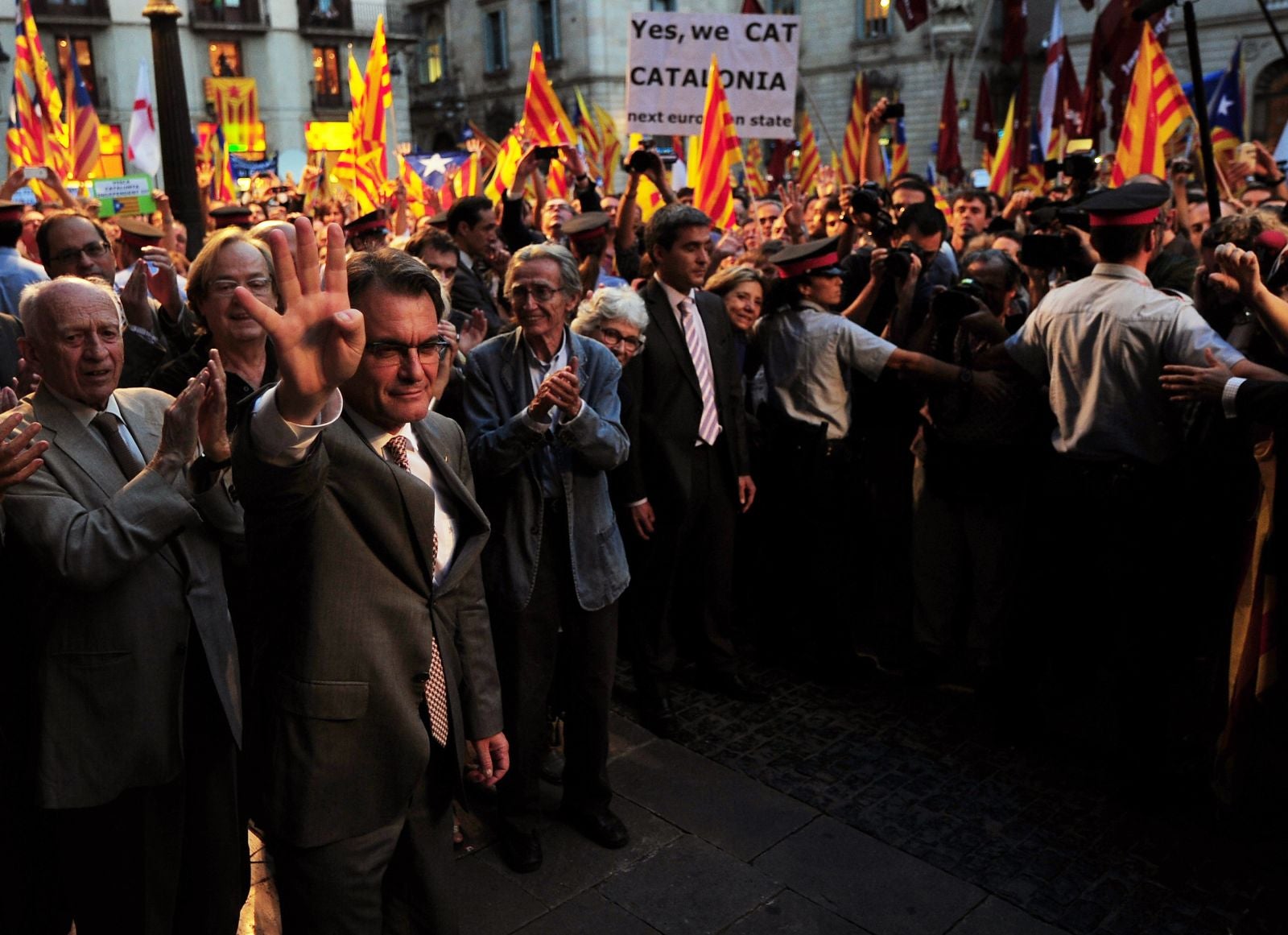 The Telegraph’s Ambrose Evans-Pritchard reports on the very concerning comments made by the Spanish army in response to the Catalonian nationalism:

First we have the robust comments of Colonel Francisco Alaman comparing the crisis to 1936 and vowing to crush Catalan nationalists, described as “vultures”.

“Independence for Catalonia? Over my dead body. Spain is not Yugoslavia or Belgium. Even if the lion is sleeping, don’t provoke the lion, because he will show the ferocity proven over centuries,” he said. . .

Is case you think he is an isolated case, former army chief Lt-Gen Pedro Pitarch said his views reflect “deeply-rooted thinking in large parts of the armed forces”.

Gen Pitarch said Catalan independence is out of the question, though he also said Madrid had bungled the crisis of the regions disastrously. “Are we looking at a failed state?” he asked.

Now we have an explicit threat from the Asociación de Militares Españoles (AME), an organisation of retired army officers, warning that anybody promoting the break-up of Spain (“fractura de España”) will face treason trials in military courts.

El Pais reports that the anti-independence movement is also being pursued through more conventional political routes. Like scaremongering about the business implications:

“Uncertainty has an adverse effect on money and the business world; and that is what we have at the moment,” said one businessman, who, despite his support for independence, admitted the current process has veered off a path of cogency.

Spain shows no sign of settling down any time soon.