If benefits were to be pegged to wages rather than inflation, then some… counter-cyclicality would be scrapped. The benefits bill would shrink in recessions and increase in boom times, compared to where it would be without the change. That would mean prolonged depressions, and a magnification of the boom-and-bust cycle. Macroeconomically, its one of the worst things you could do.

I illustrated it with this graph, showing that wages were rising faster than inflation until the crash, and only then dropped below:

But Mindful Money‘s Tom Hirst points out that when you take a longer view, the effect reverses:

Renato Faccini and Christopher Hackworth of the Bank of England’s Structural Economic Analysis Division produced an interesting paper in 2010 looking at how output, employment and wages behave in recessions. They conclude that the manner in which businesses have responded to the falls in output during this recession looks rather different [than previous recessions]. Real wage per hour growth has been weaker than in the early 1990s”.

In previous recessions wages have remained stickier than inflation. This is due to a combination of those on low salaries losing their jobs, which pushes up the average, and the difficulty employers face in reducing the wages of their employees. 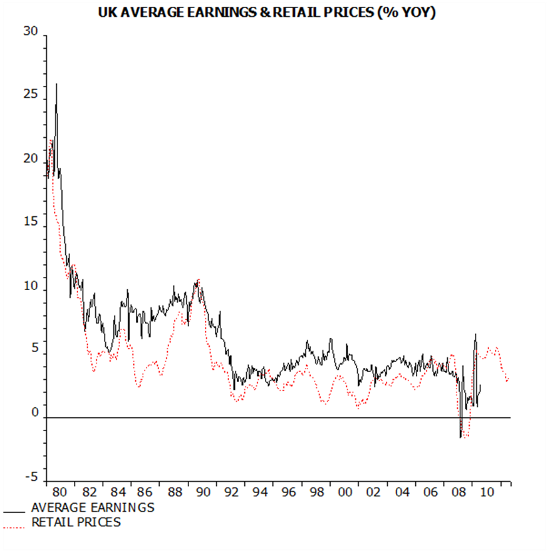 As Hirst argues, what we need to know now is whether this reversal in trend is a one-off, or if it’s the “new normal”. Faccini and Hackworth argue that there are a couple of reasons to believe it is so (citing labour market flexibility and cost of dismissal, and the new popularity of unconventional monetary actions like QE) – but we can’t know for certain without further research.