On Monday the National Minimum Wage (NMW) for people aged 21 and over will rise to £6.19 an hour from its current rate of £6.08. This represents a third consecutive annual fall in the real terms value of the minimum wage, now back to levels last seen in 2003. Put simply, the impact of the NMW is stalling. And while the Low Pay Commission’s cautious 11-pence-an-hour rise may be entirely justified in the current economic climate, it will provide little comfort for those that rely on a minimum wage to get by. 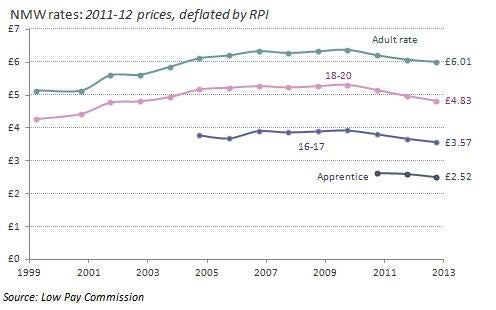 None of this is to denigrate the crucial role of the minimum wage. Since its introduction in 1999 the NMW has had a dramatic effect in reducing extreme low pay, providing around one million low-paid workers with the protection of a legal pay floor and ensuring that they are less badly paid than their counterparts in countries such as Germany and the United States. What’s more, this positive effect has come with little or no negative impact on either employment or working hours.

But while the minimum wage continues to shelter a significant minority of British workers from extreme low pay, it is not (and never has been) set at levels that would reduce the overall levels of low-paid work in Britain. Consequently, as a new report released today by the Resolution Foundation makes strikingly clear, its existence does not alter the fact that 5 million workers in the UK – 1 in 5 employees – paid at or above the legal minimum nevertheless remain in low-paid work. These 5 million people earn below £7.49 an hour (£13,600 a year gross for full-time work) and below the level of a living wage that would provide for “a minimum acceptable quality of life”. For this low-paid army – disproportionately female, part-time, and concentrated in the private sector – the NMW provides a safeguard from extreme low pay but not an escape route from life on a low wage.

Low-paid work is, of course, a feature of labour markets in all advanced economies. Yet low-paid work in Britain is associated with a number of negative attributes not shared by other countries. These include higher pay penalties for part-time work, a greater risk that women will find themselves in low-paid work, and a higher risk of low-paid work in certain low-skilled occupations such as social care and childcare.

And among advanced economies, the UK stands out as having one of the highest incidences of low-paid work. This was not always the case. After falling sharply in the early 1970s the share of low pay in the British labour market has grown steadily over the past three decades. 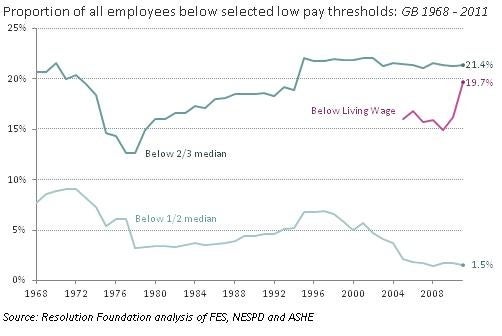 The growth of low-paid work in Britain has been, in part, the product of the steady rise in inequality experienced by much of the developed world in the final quarter of the 20th century. But policy decisions taken over the past three decades have also contributed to the rise, by eroding those institutions that have done much in other countries to arrest the forces bearing down on pay at the bottom of the labour market.

So policy choices matter. Our reliance on an extensive pool of low-skilled, low-paid labour is not predetermined. It’s not the unfortunate but necessary pre-requisite to a strong labour market. Other advanced economies with lower shares of low-paid work have not suffered lost employment or diminished competitiveness. Britain’s low-pay, low-productivity economic model is not the only option available to us.

And it is a model that we pay a heavy price for tolerating. Economically, Britain’s low-paid labour market has been central to the costly – as much £4bn a year – reliance of many low to middle income households on tax credits and other in-work transfers to support household incomes. Socially, low-paid work has been a factor in the gradual rise in in-work poverty since the mid-1990s and is linked to a range of negative outcomes including poor health, higher levels of workplace related stress, and diminished life chances.

Combating low pay is not easy. Tipping the balance away from employment strategies that rely on low paid, low productivity, poor quality jobs and towards ‘high road’ employment strategies is an almost herculean task. So it is not surprising that many policymakers have preferred to correct market inequities through remedial redistribution. Yet few, if any, believe that the growth in tax credit support that occurred over the past decade can be repeated in these fiscally straitened times. In the years ahead wages will have to do far more of the heavy lifting needed to sustain living standards. But for too long we have confused the existence of the minimum wage with a strategy to reduce low pay. They are not the same thing. So while valuing the vital protection the minimum wage provides for those at the very bottom, we urgently need to start doing the hard thinking required to deliver an ambitious policy agenda to tackle Britain’s endemic levels of low pay.