If we look back over the last decade what we see appears rather scary. It’s very widely known that typical real wages have been falling post-crisis, and that they stagnated for some years prior to the recession across the wider working population.

But those aged 16-29 didn’t just experience stagnation – they saw a significant fall in wages, which has carried on since 2008: typical pay fell for this group by 6.4 per cent from 2003-2010, or 8.6 per cent for men. And if we add to this the typical wage squeeze that occurred across the working population in the annus horribilis of 2011 this suggests a wage fall of over 10 per cent for young people during 2003-2011. And it will get worse yet. 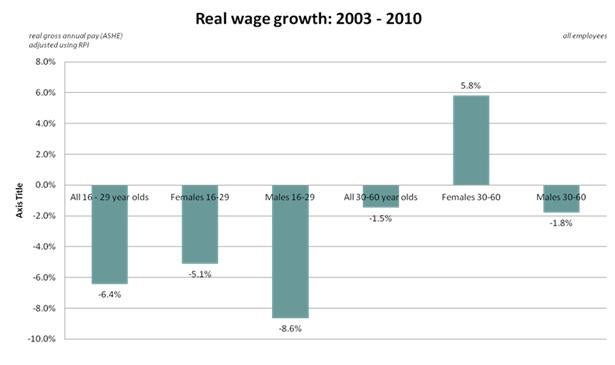 It’s not immediately obvious what is happening here and different accounts are possible.

One view would be that this isn’t really a story about what is happening to the wages of the British born workers, it’s just a description of the greater migration that occurred in this period. According to this argument the composition of young workers in Britain has changed and so, therefore, have wages: as young foreign workers tend to be concentrated in low-paying sectors, so typical wages have fallen.

I haven’t seen a definitive study specifically on the impact of migration on the wages of young workers, so it’s important to tread carefully. But I’d be very surprised if this change in the composition of young workers didn’t account for any element of these findings, just as I’d also be surprised if it accounted for all of it. The ONS has looked at the wages of British born and non-British born young workers during the years running up to the crisis. Looking at the 18-24 group, to the extent that there is a discernible pattern it is that the wages of the non-British born group were higher than their British born counterparts up until 2004. They then they fell behind in 2005 and 2006, before the situation was reversed again in 2007 and 2008.  At first glance it doesn’t look decisive.

Another account might be that the chart above is really just capturing a growth in part-time working (with lower wage rates) among young people which is dragging down median wages. Again, there is likely to be an element of this occurring but it can’t be the only factor. If we just look at what is happening to full time median wages we see they also fall through this period– though a smaller amount than for all employees.

Alternatively, and for me more plausibly, it could be that these numbers look scary because they are, actually, genuinely scary. For many economists the performance of young people in the jobs market is a barometer – or an early warning signal – of the health of the wider economy.

Even though the overall UK economy kept growing from 2004-2008 it is noteworthy that sectors where young people tend to work were struggling during this period (a point emphasised by the recent David Miliband-led ACEVO commission). The recession may have hit the young before the rest of us. Wholesale, retail, hotels and restaurants are by far the largest employers of young people. They saw an increase of around 300,000 jobs between 2001 and 2004 before employment plummeted by around 200,000 between 2004 and 2007. Falling demand in key sectors may well have put downward pressure on young people’s wages as well as on employment levels. On top of this, it’s also likely to have eroded opportunities for career progression – with fewer ladders and more snakes – making it harder to get a promotion or an upward move to a new job (which may well affect earnings mobility over the longer term).

And we should bear in mind the importance of the national minimum wage (NMW) in this debate. Dramatically more young people are paid at or near the NMW than is the case for the rest of the workforce, so changes in its level have a larger knock on effect on the wages of this age group. Following steep increases from 1999-2003 the minimum wage then levelled off in real terms from around 2004 (the same is true for the young person’s rate). So a weakening in NMW policy over time may be part of the explanation.

Young people in the UK are not the only ones suffering persistent falls in wages. The Economic Policy Institute in the US have analysed the far starker trend in young people’s wages there (though they don’t consider migration effects). Looking specifically at the entry level wages of 19-25 year olds for both high school and college graduates the EPI show that rising wages for young people have been the exception rather than the norm over recent decades. Male high school graduates saw a 25 per cent fall in hourly wages between 1979 and 2011; even male college graduates only secured a five per cent rise over this whole period (women performed significantly better, though starting from lower wage levels).

In the UK youth unemployment is – or at least should be – public enemy number one. It dominates all else. But when steady growth eventually returns it is essential that we have a jobs market that sees wage gains reach all age groups. After the long fall, the young need a pay rise more than any.