A secret weapon in the armoury of economics bloggers is the St Louis Federal Reserve’s FRED, a tool which the institution offers to let people explore, manipulate and chart a wide variety of public data. On Wednesday, they added a further 6,000 data series on price levels liberated from Eurostat, the EU’s impossible-to-use statistics database. Which means, naturally, that stats junkies have been charting inflation across Europe.

Slate‘s Matt Yglesias chooses to compare inflation in Germany against inflation in Spain, making the point that, while the two countries’ changes in price levels have been very different, the ECB has to make monetary policy which fits them both: 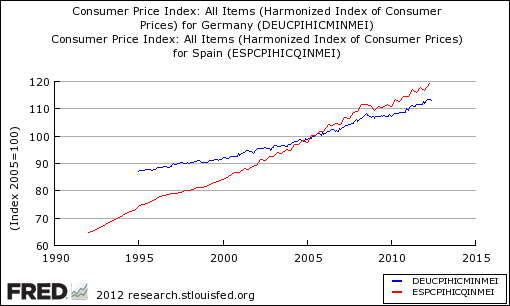 Both series are index to 100 at 2005, but you can see clearly that Spain (red) has been experiencing higher inflation that Germany (blue) for some time now.

Business Insider‘s Joe Weisenthal goes with a comparison between French and US healthcare inflation, which handily demonstrates the ludicrous explosion in prices experienced by the latter. I decided to throw the UK into the comparison as well, which places us in the middle, but bear in mind that, with a single-payer system, consumer prices don’t reflect the true cost of healthcare in the country. 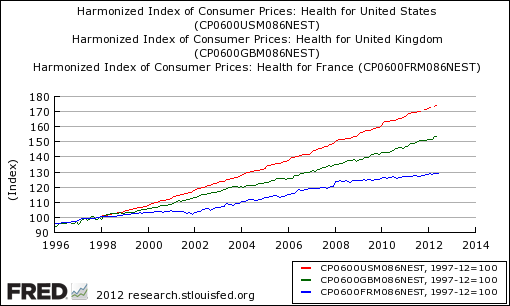 For reasons known only to themselves, FRED also choose to break beer prices out into their own seperate category. Which allows me to present the good news of the day: the price of beer in Britain has remained largely unchanged over the last decade, even while everything else has risen by 30 per cent. 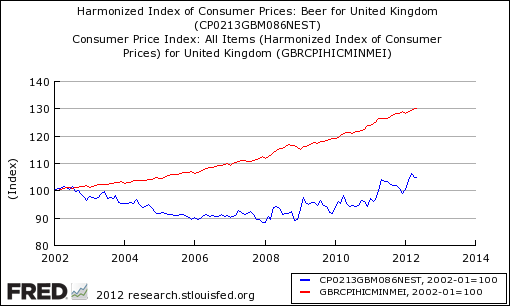 FRED: fun for all the (nerdy, stats-obsessed) family!