When modern art dealer Ileana Sonnabend died in 2007, her family had to sell a heck of a lot of paintings to pay their inheritance tax bill. They eventually valued the total estate at $876m, and had to say goodbye to works by Lichtenstein, Warhol and Twombly to come up with the $471m they owned.

But one of the most important paintings they owned was valued at $0, in a move which has led to the IRS (the Internal Revenue Service, the American tax office) taking them to court for to reclaim a further $41m from them. But this is not tax evasion gone wrong. The painting is quite literally priceless – or perhaps more accurately, valueless. 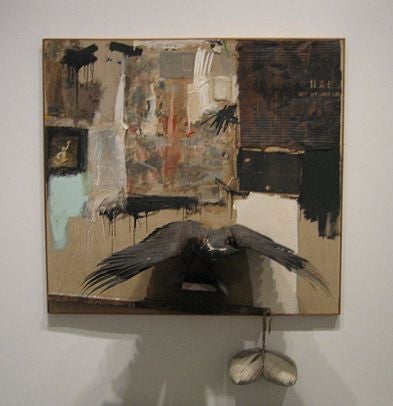 Since trafficking in the bird, a formerly endangered species and national icon, is illegal whether it is dead or alive, the painting cannot be resold. In fact, Sonnabend had to obtain special dispensation to lend the work to museums, and even keep it at all, once federal agents spotted it in 1981.

Now, as any economist knows, there is no such thing as intrinsic value. An item is worth what it can be resold for. It’s value certainly isn’t what you paid for it, as anyone who bought a full set of Charles and Diana wedding memorabilia will attest to. And neither is it what it would be in a different, hypothetical, situation. If I own an autographed copy of Sticky Fingers​ which will be worth a lot “when (if?) Keith Richards dies”, that’s all very well, but it’s not worth that now.

All of which is to say that if you own a painting which cannot legally be sold, and which can only even be retained through a rarely competent bureaucratic exemption, it is pretty fair to describe it as worth $0. (Although a more accurate valuation would be [sale price in an open market]x[probability of the restrictions being lifted], but if the latter is zero then the whole thing is as well). But the IRS, apparently, don’t agree. They claimed to the estate’s lawyer that:

There could be a market for the work, for example, a recluse billionaire in China might want to buy it and hide it.

Yesterday, the New York Times threw some light on how they actually reached their valuation:

That figure came from the agency’s Art Advisory Panel, which is made up of experts and dealers and meets a few times a year to advise the I.R.S.’s Art Appraisal Services unit. One of its members is Stephanie Barron, the senior curator of 20th-century art at the Los Angeles County Museum of Art, where “Canyon” was exhibited for two years. She said that the group evaluated “Canyon” solely on its artistic value, without reference to any accompanying restrictions or laws.

“The ruling about the eagle is not something the Art Advisory Panel considered,” Ms. Barron said, adding that the work’s value is defined by its artistic worth. “It’s a stunning work of art and we all just cringed at the idea of saying that this had zero value. It just didn’t make any sense.”

Reuters’ economics blogger Felix Salmon, who harbours part time fascination with the art world, doesn’t think too highly of Barron for this:

The assumptions baked in to this are both jaw-dropping and entirely unsurprising at the same time. Barron is the senior curator of 20th-century art at Lacma, which puts her at the pinnacle of the non-profit art world, the place where art is supposedly valued just for its own sake and not because it’s worth lots of money. And yet, faced with a literally priceless work of art, Barron and her fellow panelists “just cringed” at ratifying precisely that concept. If a work has great artistic value, in Barron’s view, it must have great financial value as well. And, conversely, if a work has no financial value, then it cannot have artistic value.

Salmon is right that there is something peculiarly specific to the art world in this error, and that’s what he focuses on for the rest of his very good piece. But it’s also representative of a more widespread form of economic illiteracy. Take, for example, arguments around the introduction of a wealth tax.

The idea is that since a) inequalities in wealth are far greater than inequalities in income, and b) wealth is a better indicator of “richness” than income (people rarely have temporary spikes in wealth, for instance), then we ought to be collecting a tax on wealth (of, say, half a per cent of total wealth over £1m per year).

This is all good, but the problem comes when people start comparing liquid and illiquid assets. Much – most – of the wealth of the richest Britons is tied up in land and property. Unless Inland Revenue want to start collecting percentages of houses (and it’s unclear what they would do if they seized, say, your front porch) then some people are going to have to start selling those homes, liquidating their assents.

When there’s a glut of properties on sale, the value falls. If the value falls, the value of what can be taxed correspondingly falls. There is no such thing as the “true” value of someone’s wealth which the Revenue can address, and if they do, they end up with cock-ups like the IRS’s. Let that be a lesson to them.