One thing that has come through in Barclays’ counter-offensive over Libor-fixing is that it genuinely believes that what it was doing, if not actually ethical, was at least no worse than that which every other bank was doing.

In its submission to parliament, it writes of itself that:

The bank’s exceptional level of cooperation was expressly recorded by each of the Authorities, and was described by the DoJ as “extraordinary and extensive, in terms of the quality and types of information provided” and “the nature and value of Barclays cooperation has exceeded what other entities have provided in the course of this investigation.” That cooperation has led to Barclays being the first to reach resolution of these issues. It ironic that there has been such an intense focus on Barclays alone, caused by our being first to settle in the midst of an industry-wide, global investigation.

Similarly, in Bob Diamond’s record of his phone call with the Bank of England’s Paul Tucker, we learn (as well as the fact that Diamond goes by RED, for Robert Edward Diamond, in internal memos) that Barclays genuninely believed the reality of Libor was that:

Not all banks were providing quotes at levels that represented real transactions.

This belief – that other banks have been manipulating Libor as well – is not some desperate attempt by Barclays to divert attention. We already know that RBS had to fire at least four, and possibly as many as ten, traders over Libor manipulation, and it seems likely that many other banks were doing the same thing. Indeed, if Barclays are to be believed, the only reason the call with Tucker happened at all was because they were manipulating Libor less than the other banks. This chart, via Reuter’s Jamie McGreever, shows Barclay’s spread over the Libor rate: 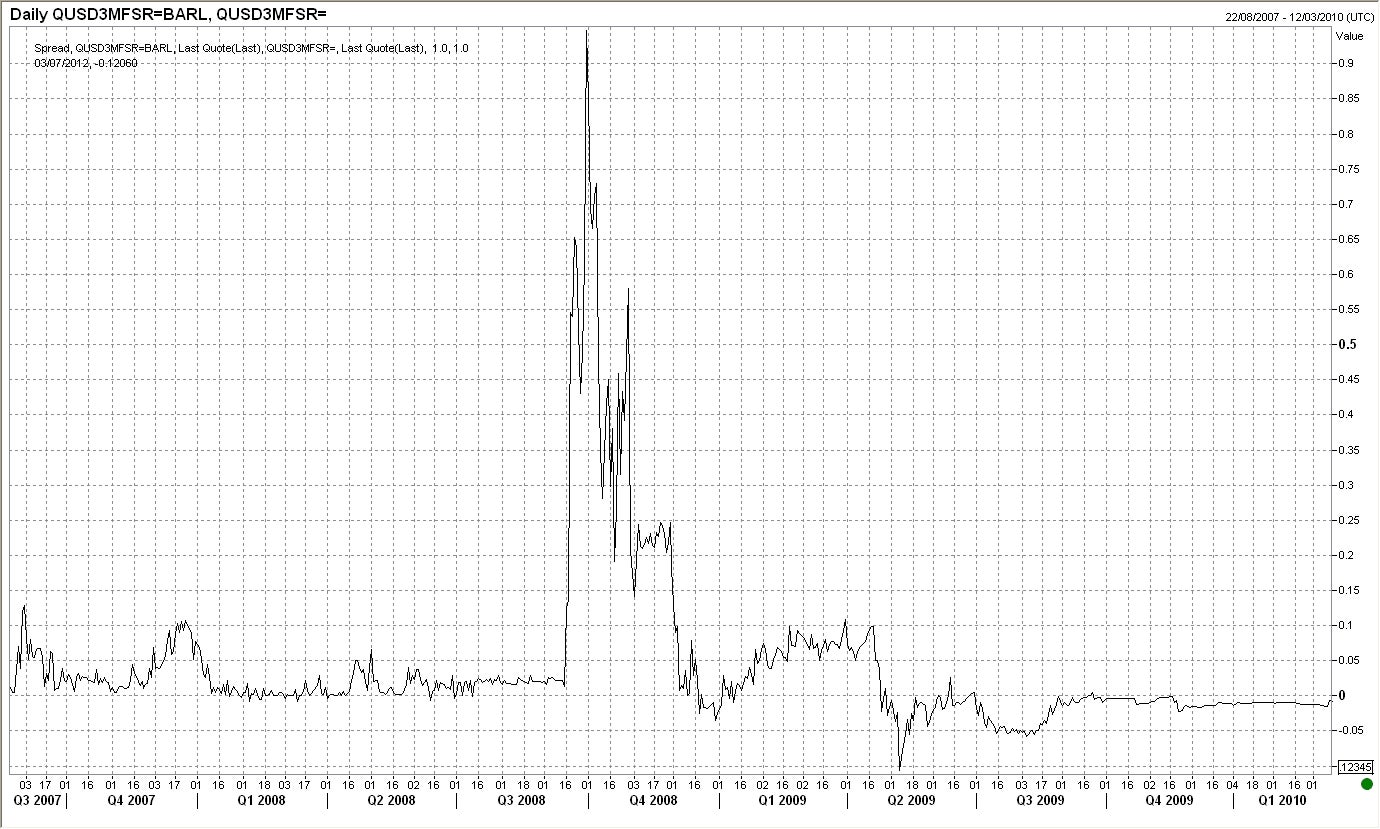 Notice the spike in Barclays’ borrowing costs in September 2008, settling down almost entirely by December of that year. The Bank of England apparently thought that was because the market considered Barclays to be riskier than most banks; Barclays believed it to be because the other banks were lying more than it was. (The answer, of course, is likely somewhere in the middle.)

It may still be true that Barclays was qualitatively worse. There is no hint – yet – that the lies from RBS went any higher than trader level, whereas Barclays’ Chief Operating Officer resigned yesterday as it became apparent that he may have directly ordered subordinates to under-report Libor rates, based on a mis-understanding of Tucker’s phone call.

But it is undoubtedly the case that the reason Barclays is getting the most trouble – the reason why all subsequent investigation has focused on them, and they have had two waves of high-profile resignations – is because they were the first to be fingered. And they were only first because they held their hands up and admitted culpability. The authorities are, after all, still investigating other banks.

It may well turn out that what Barclays was doing was in no way unique. Now, if that results in the CEOs of all major banks being hounded out and potentially prosecuted for their actions in the run-up and immediate aftermath of the financial crisis, then it’s been a long time coming. But it seems far more likely that what will happen is that by the third or fourth bank, the excuse that “everyone was doing it” will start to hold water. The failure will be seen as systematic, and worthy of investigation, but not of any extra punishment beyond the reforms which will be suggested then half-heartedly implemented on the industry. The chief executives who participated in cover-ups will get off.

What lesson does this teach banks and businesses in the future? Do not co-operate. Do not reveal anything to the authorities. If you hold your hands up and admit blame, you will be pilloried, but if you bury your wrongdoings until someone else is found out, you’ll get away scott-free.

That doesn’t seem to be the best idea.