The Economist’s famous Big Mac Index now has a sister: the McJob index.

The idea behind both is that the fast-food chain, which operates in hundreds of countries world-wide, deliberately tries to provide one of the most consistent experiences for customers of any company. You can’t compare a restaurant in london with a dim-sum stand in Hong-Kong, but you can compare McDonalds’ in both to each other.

With the Big Mac Index, that takes the form of looking at the price of Big Macs – one of the items guaranteed to be on every menu worldwide – and comparing across nations. The most recent examination found that the price of Big Macs in Switzerland was over 60 per cent higher, in dollar terms, than it was in the US, which implies that the Swiss franc was heavily overvalued.

Via Tim Taylor comes news that Orley Ashenfelter, an American economist, decided to hunt around (warning: .doc link) for a similar comparator at the other end of the chain; not produce, but labour. And again, McDonalds provides the answer. Work in one, and you’re likely doing the same job you would be in any other branch around the world:

There is a reason that McDonald’s products are similar. These restaurants operate with a standardized protocol for employee work. Food ingredients are delivered to the restaurants and stored in coolers and freezers. The ingredients and food preparation system are specifically designed to differ very little from place to place. Although the skills necessary to handle contracts with suppliers or to manage and select employees may differ among restaurants, the basic food preparation work in each restaurant is highly standardized. Operations are monitored using the 600-page Operations and Training Manual, which covers every aspect of food preparation and includes precise time tables as well as color photographs. . . As a result of the standardization of both the product and the workers’ tasks, international comparisons of wages of McDonald’s crew members are free of interpretation problems stemming from differences in skill content or compensating wage differentials.

Ordinarily, the results would be much the same as the Big Mac Index, and tell us more about the relative strengths of countries currencies than anything else. But Ashenfelter also compares those wages to the cost of a Big Mac in the same country, to work out how many Big Macs Per Hour the “crew members” (that’s the official terminology, apparently, of the Good Ship McDonalds) earn. That should tell us about the relative value of low skilled labour in the various countries examined. Here are his results: 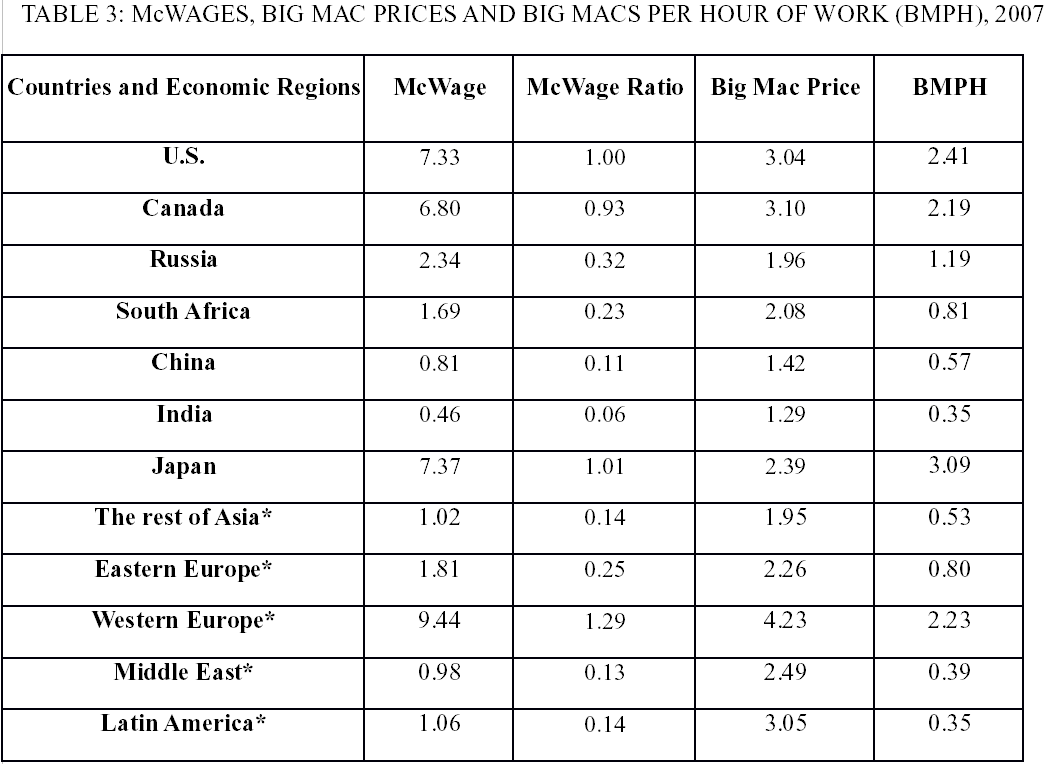 What’s really interesting about the figures is how well they map onto the overall productivity of the countries. There’s an almost 1:1 ratio between the average output per hour in the country and the wage paid:

Note that this compares nationwide output per hour, not the output per hour of the actual McDonalds employees. That metric wouldn’t vary much at all, since all the workers are trained the same way and using the same tools. Which makes this a fantastic demonstration of the fact that it’s the market, not the company, which sets the wages. Places with low productivity have low wages, which McDonalds takes advantage of. Just because they then train their employees into high productivity workers, doesn’t mean they’ll start paying them the more.