There is a view being expressed in influential circles that the money spent on cash benefits (and tax credits) as part of the Labour government’s child poverty strategy was wasted and that now it is much better to invest in services. The dominant rhetoric of the coalition government (supported by the Field and Allen Reviews and, to some extent, by Alan Milburn) is that very little was achieved despite billions of pounds being spent between 2000 and 2010, and the child poverty targets were not met. The Child Poverty Strategy (pdf) argued: “This government is committed to eradicating child poverty but recognises that income measures and targets do not tell the full story about the causes and consequences of childhood disadvantage. The previous government’s focus on narrow income targets meant they poured resources into short-term fixes to the symptoms of poverty instead of focusing on the causes. We plan to tackle head-on the causes of poverty which underpin low achievement, aspiration and opportunity across generations”. The Field Review (pdf) actually argued that investments in services should be funded by cutting child and family benefits. The chancellor immediately responded by reneging on his commitment to uprate child tax credits above the rate of inflation and instead to invest in early years for some deprived two-year-olds. James Purnell has joined the chorus and wants to freeze child benefit for 10 years in order to fund child care. Nick Pearce of IPPR has also blogged on the subject .

We need to recognise that the reduction in poverty achieved by the Labour child poverty strategy was mainly achieved by substantially increased and highly redistributive spending on cash benefits – tax credits including childcare tax credits, child benefits and educational maintenance allowances. Child poverty fell by a million. Without this extra cash it would have increased by a million. This evidence is rehearsed in Ending child poverty by 2020: progress made and lessons learned (pdf). Of course the state of the labour market, the minimum wage, and welfare to work played a part. Also extra spending on health, education and childcare helped. But the heavy lifting was done by cash transfers. The UK had the largest reduction in child poverty of any country in the OECD between the mid 1990s and 2008 – see here (pdf).

There is a much stronger association between spending on cash benefits and tax breaks and child poverty rates than there is with spending on services (see Figure 2). 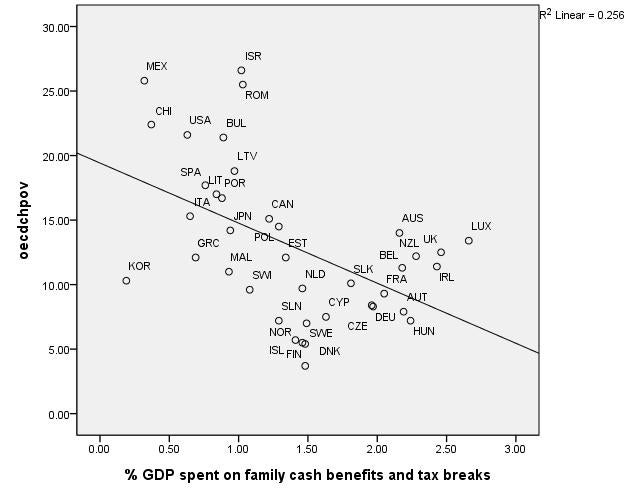 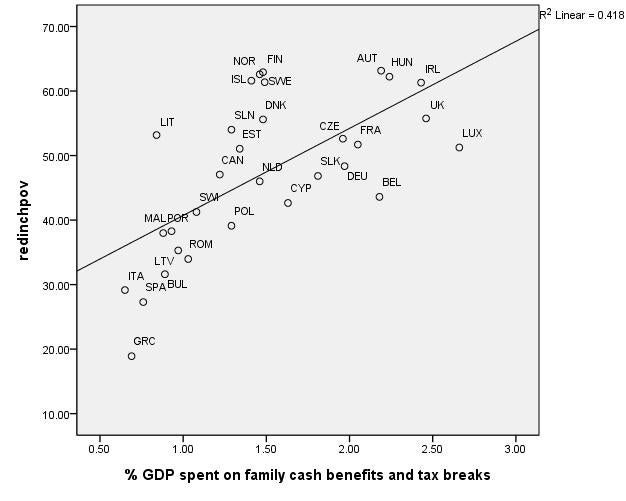 Actually, it is the level of total spending on families – cash benefits plus services plus tax breaks – that is most closely associated with child poverty. The lesson is that we need to invest in children in all sorts of different ways. Spending on childcare probably helps to increase maternal employment, enhances gender equality, and possibly also has beneficial child development outcomes. But it is probably not the best way to tackle child poverty and income inequalities. Indeed, recent analysis of EU SILC data suggests that the UK is one of the countries where childcare for children aged two or less reaches the rich better than the poor. It does not tackle the poverty of older children – except possibly in the long term. To end child poverty – and to make long term savings – we need to accept that we are going to invest more money in children; not simply shift current expenditure around. This is politically difficult – but in policy terms, and for anyone who cares about child wellbeing, necessary. To shift spending from cash benefits to services now is going to result in increased child poverty.

Jonathan Bradshaw is Professor of Social Policy at University of York and trustee of Child Poverty Action Group.