So the recession deniers were wrong again. As I predicted, rather than GDP growth for the first quarter of 2012 being revised up it was actually revised down by the ONS today from -0.2 per cent to -0.3 per cent. Output in the production industries was -0.4 per cent, manufacturing was flat while services grew by+0.1 per cent while construction was -4.8 per cent.  The fall in construction is very serious and, according to a report of the Bank of England’s agents this week, “in large part due to declining work for the public sector”.

Over the last six quarters that I have called the Osborne Collapse the economy has shrunk by -0.4 per cent.  He inherited an economy for Alastair Darling that grew by 3.1 per cent over the preceding four quarters.  Here’s the chart.  Four of the last six were negative: 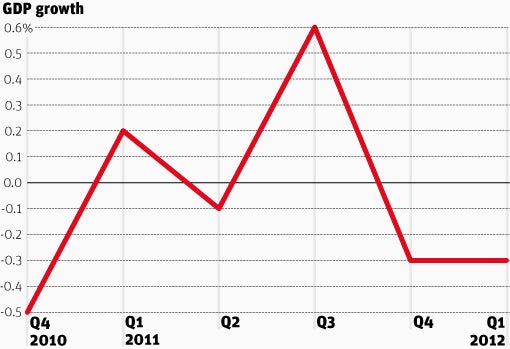 There is every prospect that the next quarter will be negative also even if the euro area doesn’t implode.  If it does things will be much worse.

From the US, the UK’s economic policy appears senseless

“Despite headwinds from the Eurozone, we are on track…We are moving in the right direction.

This is total balderdash. The economy is tanking and the coalition appears totally lost on what to do about it and they still don’t have a growth plan. Saying they have a Plan A doesn’t do it. We are now paying the price for them not having or implementing a plan B.

Today is the time to do three things:

It really is time for the cabinet to start working hard.