Via Tyler Cowen and the National Review comes this chart (click for big): 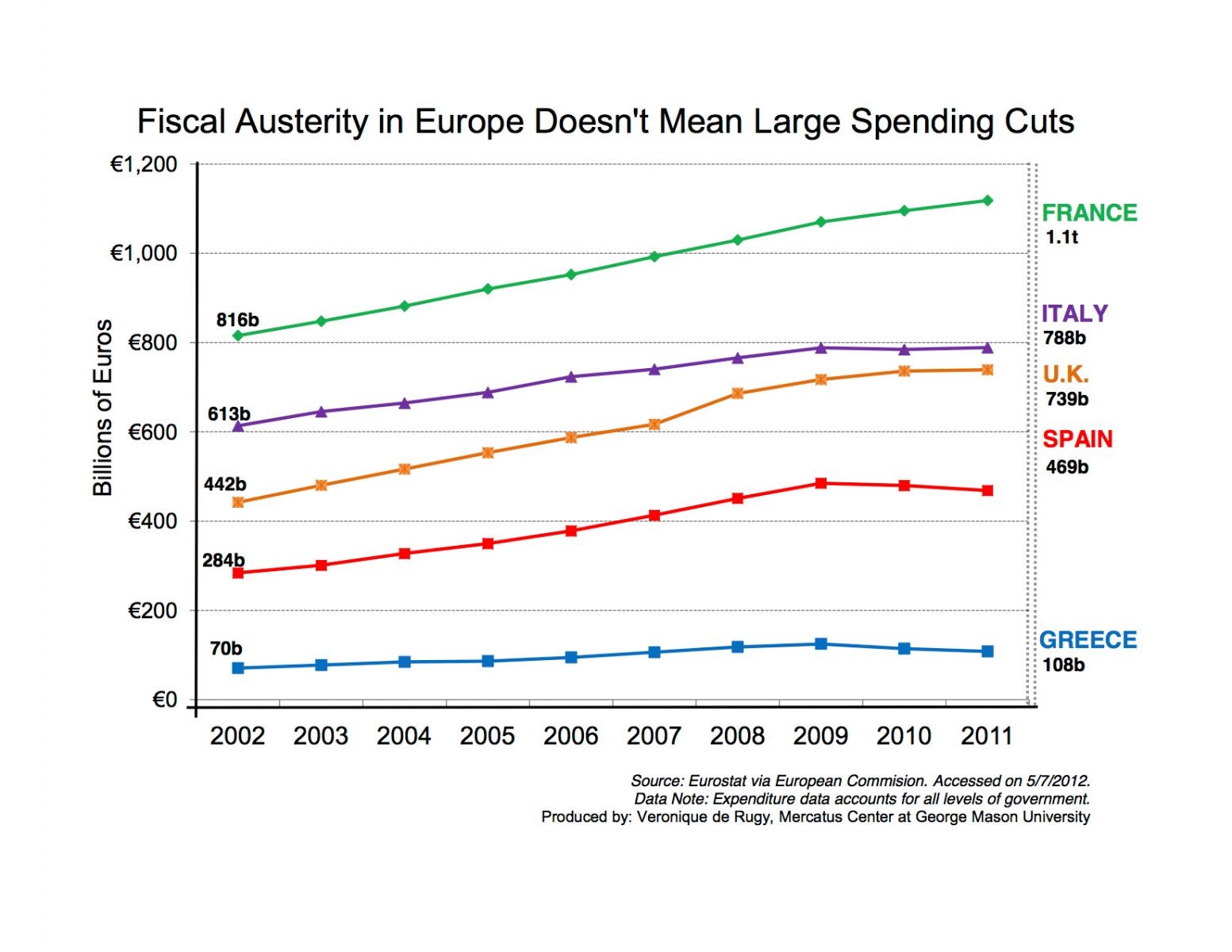 What it purports to show is that talk of “savage austerity” is overblown, that in fact no country has cut spending by more than a few billion, and that compared to 2002 levels (why 2002 is unclear) every country is spending considerably more.

Veronique de Rugy, who made the chart, does make passing reference to its major flaw, saying:

If this data were adjusted for inflation (which I would prefer but the data isn’t available) it would possibly show a decrease and certainly a flatter line for all countries.

Presenting such a chart using non-adjusted numbers is borderline dishonest. Flatlining spending in the UK, for instance, is a 3.5 per cent cut in real terms if there is 3.5 per cent inflation.

Tyler Cowen argues that using nominal figures is legitimate since nominal figures are what matter in the short run. If we accept that – or if we accept the easier-to-swallow response that an honest chart would show austerity but not “savage” austerity, or “large” spending cuts – then the next place to turn is to the receipts of spending.

What we find is, as Cowen puts it, a large increase in “automatic stabilizers”, a Keynesian term which basically means that more people are claiming things like jobseeker’s allowance, tax credits, and housing benefit as incomes go down and unemployment goes up.

These various expenditures are lumped together in the category of “mandatory spending”. They are all expenses which governments promise to spend as needed, rather than from a fixed budget. If the number of unemployed people goes up, the amount spend on unemployment benefit goes up, and vice versa. Since the number of unemployed people has indeed gone up, we would expect mandatory spending to increase – as it has done.

In order for nominal spending to stay flat, as it has done, this increase in mandatory spending has to be offset by a decrease in “discretionary” spending – buying things that we actually want. As of the 2010 spending review, the Government was predicting a 26 per cent cut in the departmental spending limits by 2015, from 27 per cent of GDP to 20 per cent.

That is where the “large spending cuts” lie. But Cowen argues that:

That is not how people phrase it, rather they are complaining rather vociferously about “spending cuts,” many of which are either imaginary or extremely small.

Perhaps Cowen is merely objecting to political rhetoric, in which case he is correct that “savage cuts to the discretionary budget which are partially offset by a growing mandatory budget” is more accurate, although less compelling, than “savage cuts”. But if he is arguing that it is wrong to even claim that cuts exist, then he is being blinded by the same argument that has taken in Dan Hannan and Toby Young. As Daniel Elton puts it:

It is in effect saying “Yes, we realise that your Sure Start Centre has had to shut down, but because there’s a whole bunch of people now in the dole, there are no cuts”