No matter how unlikely the financial sector thinks Greece exiting the euro will be, it is taking every precaution possibile to make sure it doesn’t get hurt by the process.

Lloyd’s of London is preparing for a collapse of the single currency, and has reduced its exposure to the continent “as much as possible”, according to a report in the Sunday Telegraph. Despite that, Europe still accounts for 18 per cent of Lloyd’s £23.5bn of gross written premiums, with much of that concentrated in Spain and Italy, as well as the safer markets of France and Germany.

I’m quite worried about Europe. With all the concerns around the eurozone at the moment, we’ve got to be careful doing business in Europe and there are a lot of question marks over writing business in the future in euros. I don’t think that if Greece exited the euro it would lead to the collapse of the eurozone, but what we need to do is prepare for that eventuality. . .

We’ve got multi-currency functionality and we would switch to multi-currency settlement if the Greeks abandoned the euro and started using the drachma again.

Other institutions are putting their own houses in order. Two weeks ago, ITV’s Laura Kuenssberg tweeted from a trading floor where the drachma had already been installed into the systems, and Reuters reported that a number of banks were quietly preparing for the exit, in which  case those problems would be the least of their worries:

Some banks never erased the drachma from their systems after Greece adopted the euro more than a decade ago and would be ready at the flick of a switch if its debt problems forced it to bring back national banknotes and coins. . .

A Greek departure from the euro would create legal and practical problems for the banks which would dwarf the relatively straightforward technical job of dealing in a new currency.

But how unlikely does everyone think exit actually is? Are they covering for an extreme black swan event, or is it something which they are all expecting? Joe Weisenthal at Business Insider provides this chart, from Credit Suisse: 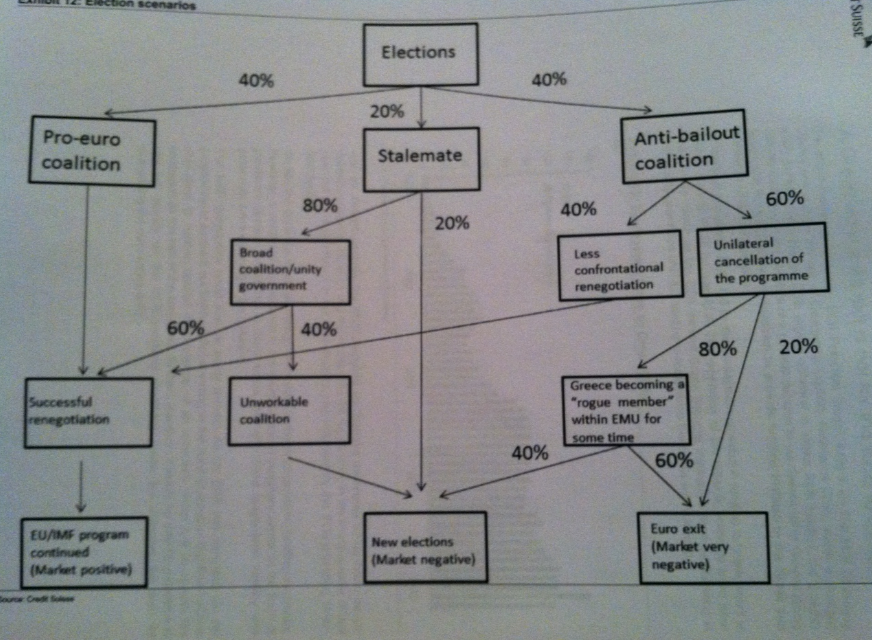 For those of you without the maths skills, that’s a roughly 15 per cent total chance of a Greek exit, and another 20 per cent chance of a third round of elections (which, of course, takes us right back where we are already). Not definitely going to happen, but worth preparing for in case. No one wants to shout “fire” and spark a run, but no one wants to be the last one in the burning room either.