What role did high levels of household debt play in generating the crash and what do they mean for our economy over the next few years?

Well-worn questions, you might think. And no shortage of people have asserted answers.  Following 2008, a whole new crunch-lit genre of books emerged to explore this. There is – or perhaps, was – something of a post-crash orthodoxy that the rise of easy credit, fuelled by run-away rewards for the super rich, and a squeeze elsewhere, encouraged ever greater borrowing.

A favoured narrative, often echoed by the coalition, is that debt ballooned as consumers (and home buyers) went on an irresponsible binge – it was all demand-led.  Others argue, particularly in the US, that exploding debt reflects an act of policy – whether explicit or implicit – to increase the supply of easy credit for low and middle income groups who were seeing their wages stagnate.  From this perspective, it was less a story of families living beyond their means and more about coping when their means stopped growing.

More recently, however, there has been a counterblast to these prevailing views.  The FT’s economics editor Chris Giles, a leading authority on our current economic predicament, maintains that fast-rising household debt should be greeted with little more than a shrug of the shoulders. Ben Broadbent of the Bank of England’s MPC makes a similar case. Higher debt is essentially about mortgages and it reflects rising house prices (let’s leave to one side for now the fact that rising debt and assets signifies a big transfer between the generations, benefiting the old at the expense of the young). And once we do take assets into account we find that the net financial position of households is roughly similar to the position twenty years ago. Relax.

So, rather than fret about the enormous size of our debt overhang and what it means for our future growth prospects, we should move along and worry instead about something more meaningful.

This account is right, of course, to point out that not all the growth in household debt is problematic.  Plenty of households will have borrowed  more for an asset (a house) that is worth a bit more, and achieved this by taking on a debt they are capable of servicing. Nothing much wrong with that. But in scoring this point, advocates risk downplaying a bigger one: debt still matters.

First, the distribution of debt burdens across different income groups is important.  Aggregate data often conceals far more than it reveal. As the chart below shows, at the bottom of the income distribution the growth in consumption appears to have massively outstripped increases in income – unsustainably so.  (A health warning is necessary here: survey data on the lowest – and highest –  incomes can be highly imperfect, so a degree of caution is warranted on the precise numbers, but the overall pattern is likely to be correct). 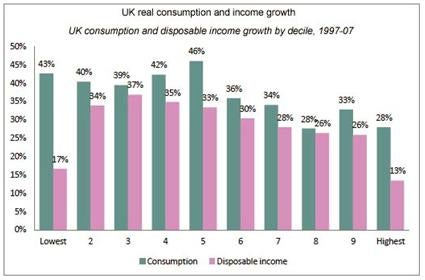 What was driving this growth in consumption is less clear cut. Part of it is likely to be underlying shifts in the cost of living that bore down hard on low income families. Another element will have been increased mortgages (though the proportion of the poorest holding a mortgage barely rose from 1997-2007, so this isn’t likely to be the only thing going on here). And if the UK consumer is anything like their US counterpart, high levels of inequality may have played a role in generating ‘trickle-up consumption’ – whereby lower income groups strain to keep up with the spending of the affluent.

Second, we shouldn’t be complacent about the number of bad loans or repossessions. Depending on the definition applied, between 5 per cent and 8 per cent of mortgages are  currently in forbearance – an agreement between mortgagors and their bank which usefully allows repayments to be rescheduled – but this stay of execution cannot be expected to last indefinitely or resolve the underlying affordability issues that hang over many households.

Third, the revisionist argument is in danger of downplaying the risks – potentially scary ones – of what might happen if, eventually, interest rates rise before we have strong household income growth (a point highlighted on this blog before).  True, at the moment, with the economy crawling along the floor and the euro-zone teetering on the brink, talk of higher interest rates feels very far-fetched.  But with inflation still stubbornly above target, and the Bank yet again claiming it will be another year before it falls into line (meaning inflation will have been above target for most of eight years) the medium term outlook for interest rates remains uncertain. At some point the interest rate hawks will regroup – and eventually a more normal level will return.

All this matters greatly because a high debt burden means many households are already highly exposed; we just tend not to talk about it much because the headline Bank rate is so low. Consider the current burden of servicing mortgage payments for low to middle income households.  It is broadly similar, incredibly you might think, to the burden faced in the late 1990s when interest rates were 5 to 7 per cent. That’s partly due to the rapid growth in interest rate spreads, and partly due to the greater stock of household debt.

An increased burden: proportion of gross income accounted for by mortgage payments among low to middle income owners 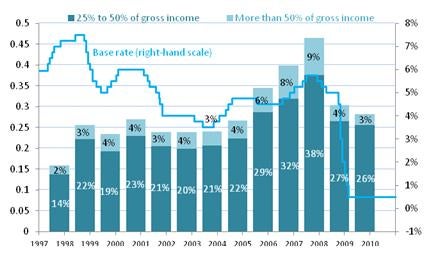 Which takes us on to the final point: the extent to which the burden of debt will continue to bear down on UK consumers – or at least a sub-set of them. The truth is no-one really knows whether or how far household debt needs to fall. If we listen to McKinsey, we’d believe that the UK is only just beginning the painful adjustment – behind countries like the US – and it could take a decade before the ratio of UK household debt to disposable income returns to its pre-bubble path.  Other analysis  argues that to be “sustainable”, household debt needs to fall from the current level of just below 150 per cent relative to income to nearer 115 per cent – a process that is likely to take until 2019 (after fiscal balance has been achieved). If so, deleveraging as well as public austerity will be a drag on consumers.

Four years on and we’re still to have a full reckoning with the crisis. UK household debt didn’t cause it all. And high levels of debt aren’t always bad in themselves.  But we’d be silly to be sanguine.  The debt mountain makes us highly vulnerable, and will be living with it for some while yet.