The TPA’s Matthew Sinclair has produced an interesting graph from HMRC’s data on the share of income, which charts clearly what it means to have a progressive taxation system (click for big, and note that the top four categories are equal in size to one of the other four; the top 25 per cent has been split up to better show the progressive nature of the system): 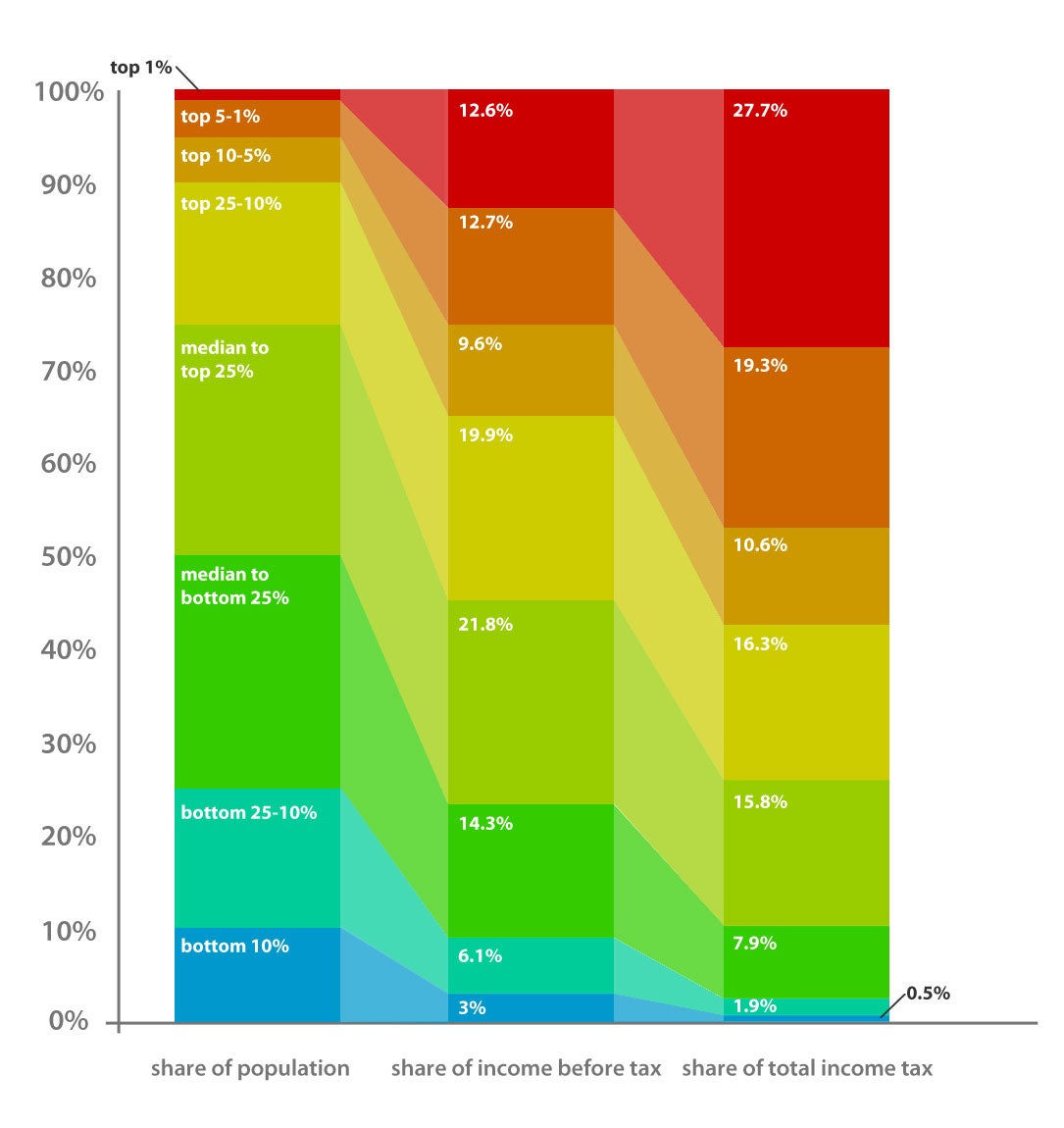 Mulling over Osborne’s tycoon tax, Sinclair provides an example of a tax “loophole” which he thinks is anything but – loss relief:

Suppose you make a £15 million loss one year, then enjoy a £15 million income the next year. How much have you made overall? £0. If you get full loss relief then you will be taxed on that basis and pay nothing, as you have no income to pay from. If your loss relief is capped at 25 per cent of your income, as the Government seems to be proposing, then you presumably have to pay tax on over £10 million. From an income of £0. Good luck.

It is difficult to argue with the ideal of loss relief; people shouldn’t be penalised by being taxed exorbitantly on multiple years’ income just because they happen to receive the actual payment in one lump sum. But the existence of loss relief is also a wonderful example of a tax system built with one set of rules for the rich, and another set for everyone else.

Suppose a different pattern of income: You are a novelist working for £10,000 a year, barely supporting yourself while you write on the evenings and weekends. (For simplicity’s sake, lets set this in 2015 when the 10k tax threshold is in effect). After five years, your book takes off, and you earn a quarter of a million in a year. Not only are you paying income tax for the first time in your life, you are straight in at the top rate.

In this situation, can you claim tax relief? Of course not. You pay your tax for the year your income comes in, and if you took a hit in earlier years, that’s something you have to suck up. Yet if that quarter of a million had been spread out over the five years before, you would have paid at least £50,000 less in tax.

It’s easy to see why this isn’t the case. It would be hell to administer, and would basically end up with everyone paying tax on their average lifetime earnings. Yet this awkwardness results in a tax system which allows relief for those who are in a position to gamble millions on a business, but not those who can only gamble thousands on a career. It’s a pattern repeated throughout the tax system, but as we’ve seen with the charity debacle, while these loopholes are used, they will be very hard indeed to close.