What does the average New Yorker want for Christmas? “Peace and a stable level of undisturbed life,” wrote Norman Mackenzie, the New Statesman’s then-assistant editor, from the Big Apple on Christmas Eve 1947. Surveying the political landscape of the US, Mackenzie suspected that the country’s politicians would not be resting over the festive period as they geared up for election year. The European Recovery Programme (or the Marshall Plan), through which the US economically assisted 16 European countries following the Second World War, was causing financial strain on President Truman, but it was internal problems that were most troubling. Who would stand in the November 1948 election, and what could they offer Americans? Mackenzie predicted that Henry Wallace may run as an independent candidate, but although the former vice-president had impressive turnouts at his rallies, he remained “a voice in the wilderness” on a national level.

A fortnight before Christmas, as the first snowfall settled on Central Park, Nature came to the help of the department stores and the glossy magazines which had been trying to jolly New Yorkers into the festi­­­ve spirit. The public had done its best to co-operate, although inflation makes every weekend a spending spree for many wage-earners. If national prosperity seems a little ragged at the edges, it is still lush enough to fill most family stockings in this city.

Christmas, even in 1947, is a great stimulus to the escapist; and most people, whether they are packing their bags for Florida or pinning up the decorations in a Brooklyn apartment, are glad of it. An insurance company, squeezing its appeal between a dozen full-page liquor advertisements in the current issue of Collier’s, insists that it is high time George, the breadwinner, “learned the facts of life” and found security for himself and his family. It is the facts of life and the search for security that are worrying George. Like millions of other Americans, he knows that there will be other things in his Christmas stocking this year beside an electric razor or a bottle of rye. While Mrs George was elbowing her way through the crowd in Macy’s basement, Congress was busy appropriating part of next year’s taxes for America’s friends in Europe; and while Mrs George was wondering whether she could afford a turkey this year, Democrats and Republicans were playing pat-ball with the politically explosive question of price controls and rationing. Once the Christmas fling is over, Uncle Sam will gaze ruefully on some of his presents, and not least on a package marked “Election Year.”

There is no rest either for the wicked or the politician. The Administration, having drummed up enough support to get the emergency funds for Austria, France and Italy through Congress, is still uncertain how much the Republican majority is willing to pay for the larger rehabilitation programme. Even if it secures a decision in principle, the overall appropriation may be reduced, re-directed or passed with such conditions that only the most desperate bankrupts could accept aid.

From the NS archive: Hay-making 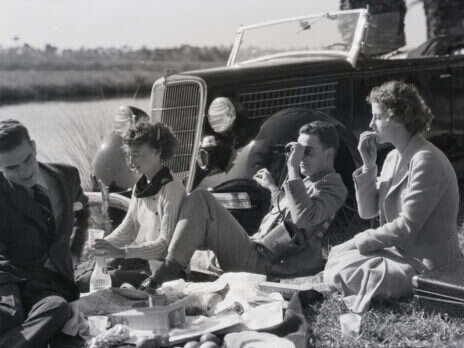 But the European Recovery Programme (ERP) is not the biggest headache for Mr Truman and the Democratic Party. After all, there is a good deal of bipartisan backing for the ERP’s political and humanitarian purposes; and the sniping of individual Republican intransigeants who want to find less expensive or, alternatively, more drastic methods of fighting the cold war against Communism, strikes home only when they use domestic ammunition.

Internal problems are the soft spot of both parties. Apart from Governor Dewey, who models his tactics on Brer Rabbit, all the Presidential aspirants are trying to get their records straight on labour, wages, prices and controls. Mr Stassen, author of a political bestseller which tells people at some length where he stands, has been flying round the country lining up as many Convention delegates as he can. Senator Taft, who toured the local party machines before him, has been back in the Capitol crying that the New Dealers are seeking to stay in power by sponsoring the Marshall Plan. This, he says, can only be carried through at the price of stiff controls and rationing, which in turn demand police state powers, thus undermining both free enterprise and American democracy.

Apart from his blunder in saying exactly that, three weeks before he asked Congress for stand-by legislation for the re-introduction of controls, President Truman has been busy pursuing the line he started with his veto of the Taft-Hartley Act and followed up by endorsing the report of his special committee on Civil Rights, which said most of the things Liberals here have been saying for years and held out little hope of achieving any of its declared and laudable objectives for some time to come.

The battle-order for next November, however, has not yet been clearly fixed. The more General Eisenhower denies that he will be a candidate, and the more each Republican hopefully insists that he will not accept the vice-presidential nomination, the more it seems probable that the General will run, especially if an easy victory over Mr Truman cannot be guaranteed by a more orthodox Republican candidate. But Mr Truman and the Democrats have had other pre-Christmas worries. Would Henry Wallace bolt the party and run on an independent ticket? The Democratic managers, who at first ridiculed the idea, were suddenly worried to issue a public invitation to Mr Wallace to campaign for the party next year. Their doubts will probably be settled before this article appears.

Wallace, who had spoken to a series of enormous paid-admission meetings in the West, New England and the South, since his return from Europe, has recently been touring New York State. At Buffalo he denounced the Democratic Party as an accomplice of the military and Big Business in the scramble towards another war, saying that unless its record changed, “there will be a new party – a party of workers and farmers, professionals and small business men – a truly democratic party.”

Asked if his decision to run – and that decision, I believe, has already been taken – would be influenced by the aid his intervention would give the Republicans, he said he was only concerned to offer the voter a real choice of policies.

At present, nobody can estimate the pulling power of Wallace as a candidate. His meetings show that he can attract large and serious-minded crowds wherever he speaks. But that is a different matter from getting out votes in a knock-down election without the aid of an experienced machine with deep roots in every community. His meetings to date have been sponsored by the Progressive Citizens of America – except those in the South, where the Progressive Citizens of America (PCA) leaves the field to the Southern Conference for Human Rights – yet Henry Wallace is neither an official nor a member of PCA.

It is true that PCA has organised its 100,000 members on an electoral basis, but it lacks the funds, the coherence, and the organisation a presidential campaign demands. But there are still more serious problems to be faced when Henry Wallace launches his independent campaign. On the national level, he is a voice in the wilderness. He must expect indifference and even hostility from organised Labour. The CJO has decided to spend its political funds against all members of Congress who voted for the Taft-Hartley Act. As an organisation, it will do no more than that, though its leaders will personally endorse Truman and, in some cases, Eisenhower, if he runs.

The American Federation of Labour (AF of L), at last stirred into creating a quasi-political league of its own, will do the same thing with half a heart. The Railway Brotherhoods have similar plans. No one can predict the stand that John L Lewis will take now he has again walked out of the AF of L with his miners. But Labour as a whole, which will probably spend great sums in the campaign, will do so with limited aims and without coherence. All the old New Dealers will go with Truman, especially those in the Liberal Party in New York and the Americans for Democratic Action, who bitterly attack Wallace for refusing to denounce Communists at home and abroad. It is possible that even the American Labour Party in New York may again split. It is unlikely that all the prominent names sponsoring PCA would remain behind a Wallace ticket. Certainly none of those who are hoping one day to create a “non-Communist Left,” with the cooperation of trade union leaders like Walter Reuther and David Dubinsky, will bolt the Democratic ticket next year.

These difficulties do not help the creation of a new progressive party on a national scale. But there are other technical problems. American electoral law is made by the States. In many places it is not easy to place a new party or an independent candidate on the ballot, nor are the requirements uniform. Wallace could probably be entered in one way or another in every State except Georgia or Florida, where court action might be taken to test the constitutionality of their unusually stiff electoral laws. This means that he will have to be backed by a coalition of local groups, such as the new Progressive Party in Illinois, which polled over 300,000 votes for its leading candidate in Chicago at last month’s judicial elections, or the new party in California which is collecting 295,000 signatures to obtain a place on the ballot.

There are some people here who are sympathetic towards the policy Wallace declares, yet who are reluctant to support yet another splinter protest campaign. This group, which believes that a new party must be built one day and that the Democratic Party cannot be permanently captured for progressive policies, would be willing to support a Wallace ticket in the face of the abstention of organised labour, provided that the campaign is fought for the establishment of a new party throughout the country which would not fold up once polling day is over. This would leave the door open for Labour and for other Liberal groups to come in, if and when anti-Communism ceases to be a major factor dividing the whole progressive movement.

Wallace and his associates have one card which may prove strong, though the shifting international situation makes prophecy dangerous. He is the one person actively campaigning against Universal Military Training (UMT). This, according to the American Legion, the Veterans of Foreign Wars, the Disabled War Veterans, and the Hearst Newspapers, is to be “the real voice of America heard round the globe.”

UMT may easily become the test issue of United States policy in the New Year. It will be settled before next November, but the debate will reveal whether Wallace can rally more than a few friends and admirers. The citizens of this city, the week before Christmas, is full of goodwill towards all men, except those responsible for high prices, labour troubles, unrest in Europe, high taxes, civil war in China, loans abroad, difficulties with the Russians. Not all those things are the fault only of Republicans, Democrats, Reds or even Henry Wallace. But nobody has offered the New Yorker the presents he would really like in his stocking – peace and a stable level of undisturbed life. He has to spend his Christmas deciding who he thinks is to blame.

Topics in this article: Harry Truman