When Ernest Hemingway’s book first appeared it was reviewed as part of a batch of new novels, alongside works by Stephen Potter, Algernon Blackwood and Eric Linklater. It was clear, at the time, that the magazine’s literary editor did not realise the book was destined to become one of the great war novels. The reviewer, however, sensed there was something special about the book, not least in that Hemingway’s tone was one of fiction rather than repurposed reportage. “ES” also praised the author’s depiction of sex and “how a real and worthy companionship” between the lovers Henry and Catherine grew up “out of the practice of the mutual pleasures of the body”.

At various intervals since 1914 the novelists of the belligerent countries have been reproached for not writing adequate novels about the war or, more recently, for having written novels that are only too grimly adequate. But, when all is said and done, what do we mean by a war novel? When we ask that a writer shall in his story capture and present the meaning of the war, are we not as unreasonable as we should be if we demanded from him a story simply about life? If we want a description of the impression that war made on those who took part in it, surely the autobiographical form is best, the form in which the task of selection and modelling is accomplished by the mechanism of circumstances. If we want more, if we want that interplay of human fate and character that is generally supposed to be the proper material of the novel, then the war itself must recede into the background. It may indeed be as vivid as the author can make it but in due subordination. Anything else is not fiction but reminiscence, good or bad – or perhaps it would be better to call it descriptive reporting. And the attempt to mix descriptive reporting with a significant story of human beings is bound in the long run to fail: it involves a confusion of aim and an uncomfortable alternation between two quite different planes of feeling.

Judged from this point of view, All Quiet on the Western Front is successful as reporting and The Case of Sergeant Grischa is a magnificent failure, and A Farewell to Arms is a better novel than either of them. There is, I think, something significant in the way in which, towards the end of the book, the two principal characters simply emerge from the war, as they might come up out of the water after swimming, and live out the rest of their story from its alarms, without giving a thought to it. Yet the war does play its proper part in the strange affair of the young American, Henry, and the English nurse, Catherine Barkley. It is both a background and an atmosphere, a hot, exciting atmosphere in which personal relationships are developed as they would not be otherwise.

From the NS archive: Jazz music 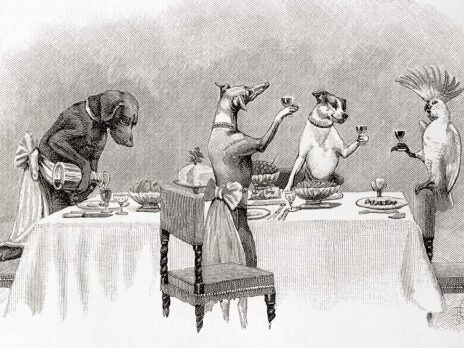 From the NS archive: Dog’s dinner

The incidental descriptions are frequently admirable and some of them can challenge comparison with any in books not so pure in form as this. I was at first inclined to think that the narrative of the Caporetto retreat rather “stuck out” of the novel into the plane of reporting. But it finally justifies itself, since it is Henry’s encounter with the Italian battle-police at the end of it that absolves him from his loyalty and sends him, at no matter that risk, out of the war. It is perhaps all the more remarkable it should so fall into its place in the scheme since, as reporting, it not only rises to a very high level, but also displays a considerable degree of personal bitterness, as when he says of the battle-police that they had “all the efficiency, coldness and command of themselves of Italians who are firing and are not being fired on” and “that beautiful detachment and devotion to stern justice of men dealing in death without being in any danger of it”.

These observations are of peculiar interest with regard to other episodes in Italian history besides Caporetto, but they deflect only for a second Mr Hemingway’s aesthetic line. His tale is not about racial characteristics or their manifestation in war, but about human individuals, Henry and Catherine and their associates, and it is a convincing and a moving tale. Mr Hemingway does not indulge in even as much explanation of motive as might be justified by the method of first-person narration. He presents the fact and the reader believes him. Henry makes love, casually, almost as by reflex action, to an English nurse, who is still cherishing the memory of a lover killed on the Somme. She resists, abruptly yields, and instantly assumes that they are really in love with one another. He, taken aback at first, decides to accept it as one of the incidentals of war, but, after a wound and a period of separation from her, finds himself as much in love as she.

I have seen the epithet “coarse” applied to Mr Hemingway’s treatment of his theme, but it seems to me extraordinarily out of place. He indicates with unusual delicacy, in phrases not reticent indeed but by no means elaborated, how a real and worthy companionship grew up between these two out of the practice of the mutual pleasures of the body. I find it hard to think of any recent novel in which the effect of the sexual act on the whole lives of two normally healthy persons has been described so fully, yet so tersely, with so little exaggeration, so little gloating. Mr Hemingway makes his reader live for a little while the life of Catherine and Henry and find in it as much as they did, which is something worth finding. With a deceptively dry style, he gets a great deal on to the page. His minor characters, the figures in the middle distance, so to speak, Henry’s friend, the surgeon, Rinaldi, and the priest, and Catherine’s friend, the nurse, Ferguson, are warmingly vivid. This is a novel with many good qualities, which are all (a rather more unusual thing) directed to the same end. To make one phrase of it, Mr Hemingway communicates his experience whole and unimpaired.