My husband is heading from Kyiv to Kharkiv. He’s delivering baby food to maternity hospitals, medications and humanitarian aid to the city’s territorial defence. Along the way, he tells me he sees road signs that have been knocked down or painted over. This is done by the locals to impede the movement of Russian troops. Passing Ukrainians can figure out where to go based on a Cyrillic soft sign here, the letters “o” or “e” there, in between the other ruined symbols. But the Russian occupiers, most of whom have been sent here without smartphones so that they won’t post selfies with geolocations as they did when fighting in Donbas in 2014, don’t have maps. Instead, these Russians, who were not invited to come here, blunder and get lost.

Throughout the province of Kyiv, the quote, “Russian warship, go fuck yourself” appears on electronic displays, from bus stops to billboards, sometimes in an abbreviated version, depending on the size of the display. Then the quote gets even punchier: “Russian, fuck yourself.” These words were shouted at a Russian warship by Ukrainian soldiers on Snake Island in the Black Sea after they were encouraged to surrender. The phrase was repeated by Georgians when another Russian warship tried to refuel at their ship. Now the words are quoted in official speeches; a Ukrainian bank has even redesigned its bank cards in order to feature the words – swear word included. These words, obscene as they are, are now making their way around the world, as a brief summation of our demands of Russia, of Putin. Get out of here!

In general, in the nearly two weeks of full-blown war that Russia has been waging against Ukraine, obscene language is no longer out of the ordinary. We use it everywhere, because in conditions of stress as our lives are being threatened, the words just fly out of our mouths. Even the children in bomb shelters are now shouting “Putin khuylo” – or “Putin is a prick” – as if it were a line from a popular children’s poem. Parents don’t forbid them from doing this because they instinctively know it gives emotional relief. These curse words are moving from being taboo to being symbolic. 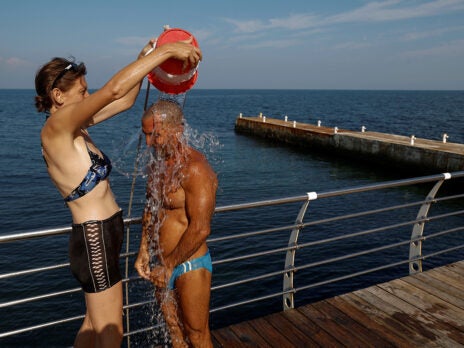 Ukrainians stand firm in the face of Putin’s threats

Before the war I was a good girl, the kind who would never say bad words, who was never rude to anyone, even in the most conflicted situations. “Good” in the patriarchal sense of the word, a girl one might imagine growing up in the 1990s in a small town near Luhansk. Yet when the war between Russia and Ukraine began, quite literally in our backyard, back in 2014, I started using filthy language even in my poems, because that very filth was as efficient as a gunshot – it had the capacity to “kill”.

I am now writing this from Kyiv, the city that became my home, where my husband and I rented an apartment for many years, and where last autumn we bought a place of our own. On 24 February, Putin fired rockets at Kyiv from Belarus while we slept. Hearing a series of explosions, we jumped out of bed. Through the window, I saw flames across the sky. I cried out, “My love! Fuck off, shitheads!” and flew into the room where my 11-year-old son was already sitting up in bed. We ran with him into the hallway and fell on to the floor. My son covered his head with his hands.

Every day, cruise missiles or shells from the convoy that stands just north of our city fly over my head. Our home is located in the outskirts of Kyiv, which means that the Russian troops are trying to break into the city centre through our neighbourhood. Nearby is the Kyiv Reservoir, which we call the Kyiv Sea. If a projectile hits this dam on the Dnieper, we will be hit with a wave so powerful that we sail with our books, children’s toys and oatmeal packets straight into the Black Sea. The Russian occupiers regularly aim at the reservoir, but Ukraine’s air defences are still repelling their projectiles, protecting us. When these explosions occur, the same swear words fly right out of our mouths. They have become an ordinary occurrence, and there is a sense that they are helping.

The Canadian-American academic Steven Pinker, whose primary focus is evolutionary psychology, believes that swearing is a “defensive reflex”. In other words, the body’s automatic, stereotypical reaction to a stimulus. The wounded animal explodes with rage, accompanied by an angry vocalisation. This sound is necessary to frighten off the enemy, to impress them with noise. It is the equivalent of our obscene language. This is exactly how I cried out when I saw through the window of my bedroom a scene of war unfolding over the Kyiv sky: a missile shot down by our air defences.

Higher primates, including chimpanzees, have their own kind of swearing as a means of averting conflict, preventing with their curses potential physical clashes, bloody struggles. The primatologist Frans de Waal documents that when angered chimpanzees begin to grunt, spit, gesture in strangely aggressive ways. This is a way to issue threats, because when chimpanzees are gearing up for a real physical fight, they don’t waste time on gestures – they simply attack. When we in Kyiv shout, “Russian warship, go fuck yourself!” or “Putin khuylo”, we attack with words – and although it is not a deadly act, it still goes some way towards protecting us from the enemy.

Now let’s turn to Lviv, in the west of Ukraine, a beautiful old European city with narrow streets leading into the centre, where my son and relatives are at the moment. There has been no shelling there, but air-raid sirens have gone off with some frequency. The sirens are also, of course, traumatic, but they do not pose a direct threat to people’s lives, so people are less likely to use obscene language than in the capital.

Then there is Kharkiv, in the east of Ukraine, where my husband is just arriving. It seems the Russians have been told to wipe this city, with its incredible constructivist architecture, off the face of the Earth. Because in Kharkiv there is already a huge number of destroyed buildings, a large European square bombed by artillery shelling; the historic city centre has been mutilated. There, the register of foul language rings even higher than in Kyiv. When shells fly over our heads, when people are dying nearby, curses in Ukraine become markers of our feelings towards the enemy, markers of stress. And where there is a higher level of loss, where there are more people killed and wounded, where houses have been razed, there is a higher frequency of swearing. This piece, written from my perspective in Kyiv, would, I think, seem too gentle and too calm in Kharkiv.

When your country is destroyed, this destruction is reflected in everyday speech. Language changes along with lived reality. Who knows, maybe after we defeat the Russian occupiers, the idea of a children’s book called Putin khuylo will seem a little less seditious.

Lyuba Yakimchuk is a poet, screenwriter and playwright. She was born in 1985 in Pervomaisk, in the Luhansk oblast, and currently lives in Kyiv. She is the author of several poetry collections, including “Apricots of Donbas”, which is about people surviving a war; the collection received the International Poetic Award of the Kovalev Foundation in the US.

This article was translated from Ukrainian by Jennifer Croft, who won the 2020 William Saroyan International Prize for Writing for her illustrated memoir “Homesick”, and the 2018 Man Booker International Prize for her translation from Polish of the Nobel laureate Olga Tokarczuk’s “Flights”. She is also the author of “Serpientes y escaleras” and “Notes on Postcards”, and the translator of Federico Falco’s “A Perfect Cemetery”, Romina Paula’s “August”, Pedro Mairal’s “The Woman from Uruguay” and Olga Tokarczuk’s “The Books of Jacob”.

Newsletters from the New Statesman View all newsletters
Subscribe for the best of our politics, international affairs, culture and business coverage, straight to your inbox
THANK YOU
Topics in this article: pwfree, Russia

Lyuba Yakimchuk is a poet, screenwriter and playwright, born in eastern Ukraine and now living in Kyiv. She is the author of several poetry collections, including the award-winning Apricots of Donbas.