The worldwide health emergency has suspended the operation of neoliberal capitalism but not yet transformed its fundamental logic. So far, the dominant response has been to replace Hayekian free-market fundamentalism with Keynesian state activism as governments underwrite the wages of workers and provide emergency loans to distressed businesses.

This is no trivial change. As the coronavirus crisis accelerates the fragmentation of globalisation, the resurgence of the sovereign state will quite possibly lead to the re-localisation of supply chains and a new political consensus on greater investment in public services – most notably health and social care. We may be witnessing the emergence of a new settlement beyond liberal economics in which the protective state not only saves the economy but also strives more, at least in appearance, to serve the common good of society.

But with forecasts suggesting the worst economic downturn since the Great Depression, increased government intervention alone provides little more than a sticking plaster that leaves us vulnerable to the pandemics, ecological threats and social crises of the future. The reverse face of an expanded government role in the economy is continued state support for the forces of unfettered capitalism and instrumental technology that already dominate and distort our daily lives.

For Keynesianism today operates in altered circumstances and is likely to deliver altered outcomes. Government and finance are much more interwoven. Power and banking have been far more centralised and personal savings have given way to personal debts. Consequently, an increase in state power ultimately accrues to the benefit of big banking and business. Money redistributed to the peripheries drifts back to the centre and monetary aid to the disadvantaged in the present turns into further dependency, plus the reduction of life to minimum survival. 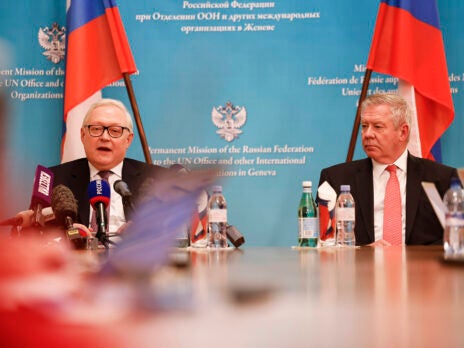 With Russian forces still on Ukraine’s border, can transatlantic allies hang together?

Thus the main winners of the worsening economic turmoil are tech platforms such as Amazon or China’s Alibaba, while high street shops and restaurants may face permanent collapse. Another group of beneficiaries are rentiers – landlords, banks or corporations with monopoly power – whose income derives from charging other people for the use of assets. Many of their excess profits are unproductive and therefore unethical. Government guarantees tend, ultimately, to help rentier capital owners rather than workers who only have their wages to rely upon. The former are having their income protected while the latter are having to absorb further debt, often at unsustainable levels (not least if the economic recovery proves to be slow and initially jobless).

Once the shutdown of the economy is over, the sort of capitalism that will likely consolidate will be oligarchic, speculative and piratical. US hedge-funds or Chinese state corporations will take over weakened businesses across the world. They are already looking for cheap acquisitions and seizable assets, like vultures circling over wounded prey. The control exercised by finance through debt will be increased by the control exercised by the security apparatus through surveillance. Already in China, economic and social credit are becoming virtually indistinguishable.

Europe is most at risk. Its relatively ageing population, declining birth rates and low pace of technological innovation have put a brake on economic growth, alongside the unresolved imbalance within the eurozone between creditor countries in the north and debtor countries in the south. The EU lacks coordination and risks sliding into national rivalry at a time when international coordination is crucial. Even more than in the wake of the 2008 financial crisis, when Greek ports were sold off to China and banks fell into the hands of Gulf states, Europe’s businesses will be subject to hostile foreign takeovers. When the pandemic hit, China originally offered more immediate help to Italy in terms of medical supplies than did Germany.

While the strengthening of national governments is necessary, absolute sovereignty either favours market expansion into all areas of society or some form of state capitalism. Either way, the sovereign state is complicit with the exploitation of workers and the commodification of life. The EU’s focus on promoting the free operation of the market has encouraged deregulatory competition and fiscal dumping (such as reduced corporation tax rates) among its member states, but nationalist protectionism can merely intensify this process.

For this reason, we require cross-border, rather than merely national, restrictions on globalisation. If it changes course, the EU is in a unique position to undertake this. It can potentially outflank both US free-market fundamentalism and Chinese state capitalism.

A good start would be to support the resurgence of corporatist bargaining at national levels between the state, business, trade unions and the charitable sector. The EU needs to qualify the four freedoms – people, goods, services and capital – and transform the single market into a more social economy. Brussels should champion cross-border deals that link workers and civic groups, thereby protecting them from the homogenising pressures of state and market power.

This could be partially achieved via readily obtainable, generous and stigma-free benefits for the unemployed, followed by a commitment to pay workers the living wage – especially in the most precarious sectors such as care, cleaning and delivery.

Together with member states and regional governments, the EU should also support the creation of new trade unions in the gig economy that give workers proper representation and promote workplace democracy. If a plural and democratic corporatism between rival interests can be negotiated at member-state level, then cooperation across national borders is equally possible. This needs to include a certain amount of required fiscal parity in order to restrain the urge to attract the most unscrupulous international operations. Without this carapace, individual countries on their own will not be able to resist the lure of global capitalism.

EU institutions are uniquely positioned to promote greater economic solidarity. At their best, they reflect the reality of states and markets embedded in a network of nations and peoples. If it is true that relationships and institutions trump individualism, then this must also be true at the cross-border level, otherwise the nation-state becomes but the anarchic individual writ large. By contrast, internationally mingled sovereignty is more democratic, if combined with an internally pluralistic devolution of power and resources. This is because shared sovereignty can alone subject international economic operations to some measure of political control.

Thus, the more Catholic and Christian dimension of the EU’s founding legacy has always linked subsidiarity with federalism at every level, refusing either the absolutist nation state or an international technocracy. In the face of both liberal globalisation and national populism, this “third way” needs to be recovered.

To build such a model, the EU requires a radical rethink, which must shift its core purpose away from the unfettered free market. Even after the end of the lockdown, restrictions on the free movement of people will likely remain in place. The same should apply to capital, so that national companies are safe from takeovers by multinationals. They strip assets by outsourcing operations, load debt onto balance sheets and further empower shareholders at the expense of workers. But Brussels must go much further in curtailing financial speculation and instead channelling capital into productive activities. One way might be the Franco-German Recovery Fund, with member-states issuing common debt to fund some €750bn of grants to help those countries that have been hit hardest by the pandemic.

Another way to do this is to create new bonds for capital investment issued by national, regional and even municipal bodies, but underwritten by all member states in order to pool risk. The issuance of such bonds should be linked to devolving tax and spend powers to lower levels of government, including that of the state, thereby reducing the size and costs of the central bureaucracy.

For this to work the north of Europe likely needs to accept a measure of debt forgiveness for the southern nations but in ways that does not hurt individual savers. And then the EU needs to try to craft a better trading balance of internal exports and imports that could release both the southern countries and the German populace from the negative effects of the German imbalance towards exporting. These effects include permanent deficits in the South and lower than living wages in the North. Clearly that needs to be accompanied by a more shared, democratic and politically integrated management of the euro, if that currency survives.

At the same time, the EU could deploy its trans-state authority to encourage in every nation a reinvigoration of local government, regional banking and the growth of personal savings and assets. These processes alone can inhibit the rise of debt dependency and the consequent obliteration of personal and community self-government at the hands of impersonal financial and bureaucratic power.

The EU also needs to go much further in allowing state aid for manufacturing and industry to be more flexible. If a competitive market is the aim, then groups of countries such as the EU have to be allowed to support domestic businesses against state-backed conglomerates from China and the US. Another European response could be not just to impose fines on uncompetitive actions by behemoths such as Microsoft or Google but also to adopt laws that break up monopolies, beginning with the tech platforms.

Ultimately the problem is that the current agents of Keynesian reform, whether they are businesses or bureaucracies, have themselves become totally imbued with merely profit-seeking and instrumentally controlling habits of mind. We need, therefore, new institutional agents of change. But rather than unrealistically beginning from nothing, the EU and other European governments should encourage corporate bodies to behave more virtuously and with greater social purpose. A mutualist ethos can be encouraged through regulation, preferential treatment and higher requirements of vocational training and professional belonging.

The difficulty with the apparent return of social democracy within single nations is that, after the wholesale transformation wrought by neoliberalism, it is all too likely to result in an oligarchic consolidation of monopoly capitalism. This would involve a further loss of power, wealth and social status for the majority of people, even if they are granted a minimal increase in basic security.

What is more, social democracy, like free-market ideology, has always relied upon steady economic growth. But if we are about to move into a period of severe recession or even depression, then we may face a situation more like that of the 1930s, in which more lurid and extreme ideologies will exert mass appeal. Often these will involve a hybridisation of emotive nationalism with rationalist futurism, and it will be the large states such as China, Russia and the US who will be most capable of rendering these hybrids globally dominant.

Faced with this prospect, the EU – hopefully in alliance with the UK – possesses both a unique capacity for resistance and for crafting an alternative model. At its core lies the search for an internationally just order respectful of persons, of relations, of localities, nations and inherited traditions. In essence, a quest for the acceptable co-belonging of human beings within and alongside the rest of the natural world.

John Milbank and Adrian Pabst are the co-authors of The Politics of Virtue: Post-Liberalism and the Human Future (Rowman & Littlefield)

@AdrianPabst1
Adrian Pabst is an author, academic and contributing writer to the New Statesman.