Everyone loves the idea of a high-speed train. In fact I imagine you have a picturesque image of a TGV whisking you to Marseille, a ICE pulling into Frankfurt or a Shinkansen bullet train passing Mount Fuji in your mind’s eye even while reading this paragraph.

Something similar was likely in the minds of the authors of a controversial report “How to Spend it: A Proposal for a European Covid-19 Recovery Programme” by The Vienna Institute for International Economic Studies. Their proposal for a new, “Ultra-Rapid-Train” European network consists of four rather far-fetched lines running from Dublin to Paris, Brussels to Valletta, Lisbon to Helsinki, and Berlin to Nicosia. 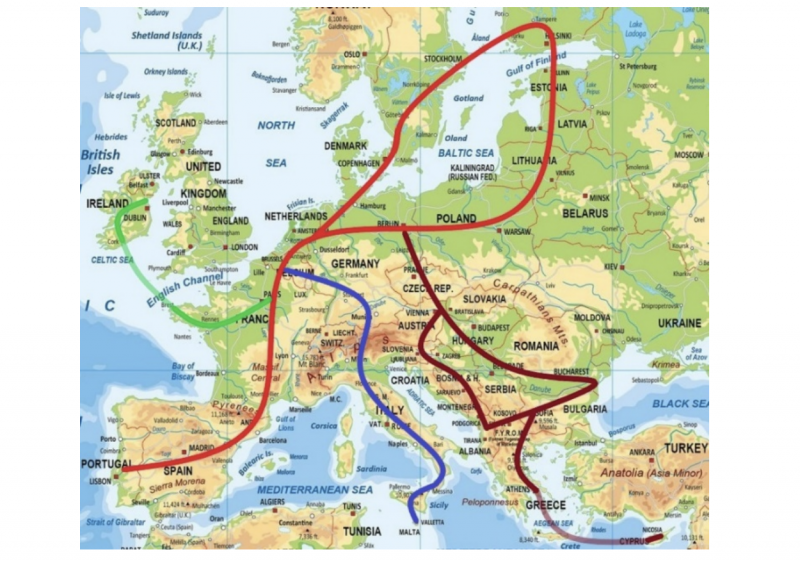 GEOATLAS.com; routes from wiiw Policy Note ‘How to Spend it’, June 2020

The problem is, however, that this suggestion seems to take too little account of what infrastructure already exists in Europe (or is currently at the planning stage). So taking the premise of the report at face value – that the EU has a large amount of cash for investment in railways – what should it actually spend the money on instead? Here is a five point plan:

1. Get people out of planes and onto existing long-distance train lines

Of the top 30 flight connections in Europe by passenger numbers, 11 are routes where sea or mountain ranges make rail travel difficult or impossible, and three are over 1000km rendering rail not competitive in terms of time. But 16 are between cities that are less than 1000km apart. The Dutch rail network operator ProRail took this data and commissioned a report to examine the top ten routes where rail has the biggest carbon dioxide saving potential.

The startling conclusion is that in eight of the ten cases, journey time is already under six hours by train, and in three cases even under four hours. Meanwhile only the Frankfurt and Düsseldorf to London routes lack direct services. The central problem is instead the regularity of the service – there are simply too few trains running on these routes. In only two cases – Madrid-Lisbon and Vienna-Frankfurt – would further investment in higher speed lines make obvious sense.

The problem is that most railway companies lack adequate numbers of internationally compatible trains for these services: Germany’s Deutsche Bahn has only 33 InterCityExpress (ICE) trains that can run in France, Belgium and Netherlands in its fleet of almost 400 ICE units. Meanwhile Thalys, the majority French SNCF owned operator of Paris-Brussels-Amsterdam services, has not invested in new stock for two decades, and would sooner charge a premium for its services rather than upping passenger numbers.

The solution: use EU money to procure a larger fleet of high-speed trains that can run EU-wide, and allow operators anywhere in the EU to lease this fleet.

2. Get people out of cars and onto regional trains

This ought to be a no-brainer for EU officials stuck in Brussels, one of the most traffic congested cities in Europe: leave the car behind and take the train to work. Yet anyone who tries to do that – not only in Belgium, but between the cities of the Ruhr region in Germany, or around Rome or Bucharest – is often faced with an unpleasant travel experience on crowded trains that are unreliable at peak times.

Luxembourg has experimented with one solution; making public transport, including its trains, free to use. While cities such as Vienna and Berlin have either already implemented, or are considering, a €1 a day travel model. Whether cost reduction or elimination makes sense for all passengers is open to question – making sure local travel by train is within the financial means of all social groups is obviously a good idea, but the value for money for these proposals is so far unproven.

The solution: regional and local authorities need to invest in capacity enhancements – longer trains and double deck trains, and with better quality interiors and wifi that provide a comfortable commuter experience. This needs to be accompanied by targeted investment to improve reliability by removing network bottlenecks. EU funds for the decarbonisation of Europe’s economies can support both of these options.

If the TGV or ICE is the symbol of today’s modern railways, the long-distance night train – think of the Orient Express or the Trans-Siberian Railway – is an older technology that could do with a revival. With a journey time of eight to ten hours, and a lower speed of even just 200-230km/h, distances of over 1000km that are unviable in the daytime are easily possible overnight. However, as anyone who has taken one of the few night trains in Europe recently knows, much of the time overnight services are unreliable, use old carriages, and involve being stuck in a compartment with a group of complete strangers, which is not everyone’s cup of tea.

Austrian Railways ÖBB are tentatively trying to rescue the night train. Their network of Nightjet services is slowly expanding and they are procuring 13 new de luxe night trains that will be on Europe’s rails by 2022, and for the first time could appeal to business travellers. However, Europe’s big railway players – SNCF, Deutsche Bahn, Renfe and Trenitalia – have either stopped night trains completely, or massively reduced the number of services.

The solution: the EU should procure a huge fleet of new night trains, similar to those ordered by ÖBB – with locomotives that can run Europe-wide and with a maximum speed of 200-230km/h, and make these available to lease from rail operators. From the north of Sweden to the south of Italy, from the Benelux countries to the Balkans, this would give night trains a new lease of life – and allow smaller operators to lease these trains.

Europe’s railways are still in many senses resolutely national – everyone knows their national railway operator, and passengers think nationally too. This is a clear area where EU intervention is vital. Sometimes cross-border tracks have been removed altogether. The ex-MEP Michael Cramer has listed 15 low cost projects where cross-border lines could easily and cheaply be rebuilt.

Even where lines exist, often the cross-border segment has poor quality infrastructure — with slow speeds and lines not electrified. When tracks are in place, services do not always run –- due to the lack of collaboration between the rail companies on either side of a border. And even if there are trains, booking them is often a hassle, or timetables either side of the border do not match.

The solution: the EU should make available a fund for the improvement of cross-border regional rail – and funds from it can be used to rebuild infrastructure, to electrify existing lines, to procure cross-border compatible rolling stock and to coordinate ticketing and timetabling.

5. Open data for timetables and tickets, and passenger rights for multi-modal journeys

Anyone wanting to book a flight has a dozen or more flight comparison websites available to them, yet no equivalent – a Skyscanner for rail if you like – currently exists. Trainline.eu is the closest there is to such a service, but even then, it is a long way from covering all of Europe’s trains, both in terms of finding out what trains run and being able to book them online. And often booking a cross-border train is a nightmare when different providers offer different prices and different booking terms – for the same train!

Further, combining transport modes – long-distance coach and train, or train and plane is next to impossible across almost all of Europe, with Lufthansa’s collaboration with Deutsche Bahn being a rare workable case. If a passenger chooses to combine modes themselves, and something goes wrong on the first leg, the passenger is left having to buy a new ticket if they miss the second.

The solution: make available all timetable and all ticket data for all trains in all EU countries, plus the UK, Norway and Switzerland, in an open data format that can be licensed by third parties. If railway companies are unable to do this, use EU funds to assist their digital transformation. Pass a new law on multimodal passenger rights and if necessary, develop a system to compensate operators for delays on other modes.

To conclude: there are many useful ways European Union money could be spent to rejuvenate the continent’s railways as part of a post-COVID decarbonisation plan. But building new high-speed lines is only one small part of what is needed: more cross-border trains (including night trains), targeted infrastructure investments, and improvements for passengers on timetables, ticketing and multi-modal journeys are the fast way forward.

Jon Worth is a campaigner, consultant and blogger. He writes about the EU, Germany, the UK and tech. He tweets @jonworth.