Four years ago, 19-year-old Modina’s future looked very different. Her family had decided it was time for her to leave education and get married. Having already seen the impact of underage marriage on her elder sister, who had a “miserable life”, Modina was determined to refuse and stay in school.

Today, a group of girls dressed in brightly coloured saris are sat in a small hut, in the Narsingdi suburb of Dhaka, listening intently to Modina. She is running today’s education session, having been trained in leadership skills by the Edge Club – English and Digital for Girls Education – a British Council initiative offering girls the chance to develop their English and IT through peer-to-peer learning.

“How are we today?” Modina asks. The girls laugh and reply “wow!” before playing a game to practice their English.

The atmosphere in the hut, with its corrugated iron walls decorated with posters informing the girls how to stay safe online, eat healthily and say no to unwanted physical contact, is giggly and supportive as each girl shares her name, and something she likes.

“I was just a girl in the village,” Modina tells us, through a translator, after the class. “But since learning the leadership skills, I feel like I am counted and respected in the community.”

“I was in grade nine and my family wanted to marry me off,” she explains. “People had come to see me for the process of getting married. But I said no, I didn’t want to get married and I stopped my marriage.” 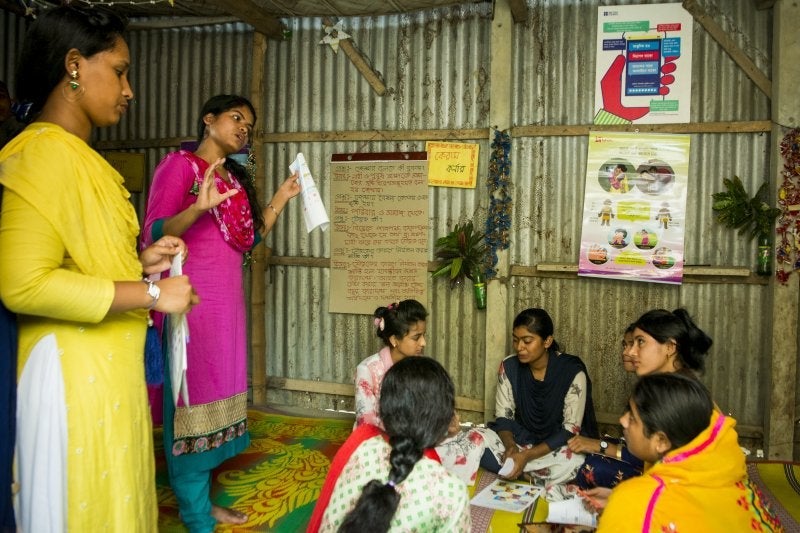 Though her parents respected her choice, Modina’s decision has made her unpopular with her wider family. Yet having learned more about child protection and girls’ rights through her leadership training with Edge Club, Modina has been given the confidence to intervene for other girls in her community who face being married off while still underage.

“One of my neighbours was from a broken home and her parents wanted to marry her off,” she explains. “I tried to convince the parents that it was not a good thing to get married at such an early age. They were not convinced but when I told the lady at Edge she helped intervene so the marriage was stopped.”

Modina says she would not have had the confidence to take action if it weren’t for the skills she’d developed at Edge Club. “What I now tell others girls is never say yes to child marriage.”

Child marriage is illegal in Bangladesh, yet it’s estimated that 52 per cent of girls there are married before the age of 18 – the highest rate of underage marriage in Asia.

For nine decades the law was governed by the British colonial 1929 Child Marriage Act, but was updated by the 2017 Child Marriage Restraint Act, which introduced stricter penalties for anyone convicted of the offence. The changes also include punishments for marriage registrars, who must provide more proof of age, and could lose their licence and be imprisoned for registering a child marriage.

“The good side of the law,” according to Professor Taslima Yasmin, a legal academic at Dhaka University, “is that it gives more authority to local government representatives and certain government officials to stop a child marriage.”

Yet the law remains controversial. It includes a “special provision” that legalises child marriage when it is “in the best interests of the minor, at the directions of the court and with consent of the parents or guardian of the minor”. There is no minimum age limit on the special provision.

Veteran feminist activist Shireen Pervin Huq, whose organisation Naripokkho has been campaigning for women’s rights since 1983, was one of the many people who protested against the provision.

“Some people are defending the government’s law change,” Huq explains when we met at the WOW Dhaka Festival, where she is speaking on a panel about whether women and men are equal under Bangladeshi law. “They’re saying that when the family wants their child to get married underage they have to get permission from the court, so there are in-built checks and balances. But it doesn’t work that way.”

Huq is concerned that by providing exceptions in which child marriage is legal, it will be harder for law enforcement to intervene to prevent a marriage.

“Local administrative officers have the power to intervene and stop the marriage if they know an underage girl or boy is getting married. But now if they go, maybe the family has permission from the court. They don’t know whether to stop it. Once the marriage is solemnised, it’s too late.”

She explains how a then-sitting minister “told me that her mother got married at 13 and they had no problems. In other words, there was nothing wrong with the provision. I said your mother getting married at the age of 13 cannot be a justification 70 years later to introduce such a provision with no age restriction at all.”

One of the problems Professor Yasmin has identified with the special provision is there is no clear guidance on when a marriage is in the “best interests” of the child.

“We need to see specific suggestions as to what considerations are going to be looked at in the court to allow such a marriage — how the court would come to the conclusion of what is in the best interest of the child.”

One concern is that the special provision will be used to force girls who are victims of a sexual to marry their rapist.

“We see these kinds of incidents in the news when there’s a rape victim and a local arbitration happens about what’s in the best interest of the girl,” Yasmin tells me. “The decision comes out that the best thing would be to get the girl married to the rapist.” Critics of the law are concerned that the special provision risks endorsing such practices through the courts.

Currently there is little data to demonstrate whether the special provision has impacted on the number of child marriages that have taken place. This is something Yasmin believes needs to change.

“Those who are actually giving the child into marriage, they would do it anyway,” she says. “I don’t think they would go and get a pass, seek permission of the court, go through all the hassle. But we do need to collect data to see if this exception clause is being used or not — as well as if people have been charged and convicted under the new laws.”

She’s concerned that a change to the law is not enough to change behaviour — that “more policy level changes need to be brought in to prevent child marriage and simply bringing a new law perhaps will not change the scenario”.

However, as Modina’s story shows, there is a growing resistance to child marriage from young people who are saying no.

Education is the key to this resistance. Back in Narsingdi, the Edge Club has given the girls a new determination to live their own independent lives. When they are asked what they want to do when they grow up, the answers rush back — “computer engineer”; “police woman”; “teacher”; “banker”; “lawyer”.

“If there is any job people say a girl can’t do,” one girl in a green and red sari pipes up, “we will show them that girls can do that job!”

Modina’s younger sister also attends Edge Club. She will now also get married only when she is an adult, thanks to Modina’s example — meaning Modina has not only stopped her own underage marriage, but those of two other girls after her.