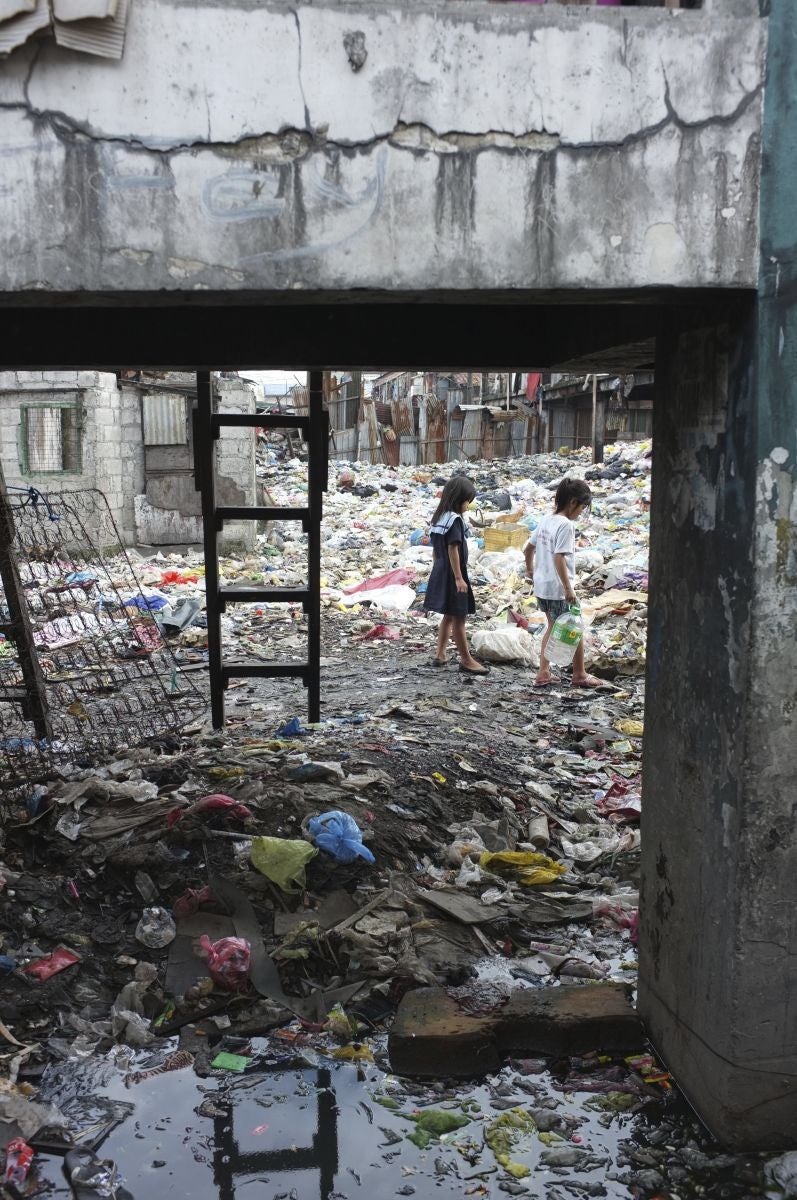 On 14 November 2013 Typhoon Haiyan, the most destructive in Filipino history, slammed into the Visayas islands killing over 6,000 people, injuring tens of thousands and making millions homeless. International media attention focused squarely on the disaster zone and it was impossible not to be moved by images of the extraordinary destruction – ships tossed up onto the shore, entire buildings flattened, the exodus of the homeless and bodies being buried in mass graves.

While these events were catastrophic and the consequences far-reaching, there are pernicious and equally destructive forces at work every day in the Philippines. Affecting people whose plight is equally grim yet usually invisible, they are covered only sporadically by the media and whose existence the central government ignores wherever possible – except at election times.

When Typhoon Haiyan struck, I was making a documentary series over six months in Manila’s infamous Tondo slums – some of the worst in the country. There are an estimated 4 million slum dwellers (or urban poor as they are often euphemistically referred to) living in Manila’s sprawling districts. These are the poorest of the poor, the dispossessed and powerless, squatters packed into crumbling “temporary” tenements or living in shacks slung under bridges or hovels built on top of toxic waste dumps.

Life is a daily struggle for these squatters whose families can number 12 or 14, giving the Philippines having one of the highest birth rates in south-east Asia. In the most populous Manila slums, such as “Happyland” or “Aroma” – occupation runs at 75,000-80,000 people per square mile. One of the densest on earth.

This over population is, I believe, in large part due to the Catholic beliefs of many Filipinos, resulting in a reluctance to use artificial contraception or education, resulting in fisherman like Gener Pagtabunan and his family to live a life of poverty.

Gener, his wife Lorna and their nine children live in a narrow alleyway in Beseco slum crowded into a two room shack with a dirt floor, no running water or toilet, cooking on an open fire. Gener, an economic refugee from the provinces, struggles to make even a subsistence living fishing the polluted and unproductive waters of Manila harbour.

“You saw it yourself, right? Nothing, not even one fish. Nothing,” says Gener’s wife Lorna plaintively as he returns empty-handed for the fourth day in a row to face the hungry faces of his children. To make ends meet Lorna painstakingly peels garlic for hours at time earning $US1 for every 15 kilogrammes. Just enough for one meal for the family.

Squatting over a tub of unpeeled garlic Lorna laments, “Whenever I have a little food, I just divide it amongst my children because I know it isn’t enough for all of us. I resent having so many children.”

This conflict between religion and pragmatism is a common dilemma here in the slums.

Informal midwife, Remi, sees it every day as she assists women, often still in their teens, in the squalid slums. She sees first-hand the cycle of poverty that having large families creates.

“I use family planning myself, that’s why I only have five kids,” says Remi after a long night spent delivering yet another baby into the slums. The baby’s parents are young scavengers, it is their second child and they live in a claustrophobic room almost entirely filled by a bed and lit only by candle.

“My views conflict with my religion, right?” continues Remi. “The Bible says contraception is bad – especially ligation. Do you prefer children growing up with no discipline from their parents or do you follow what the Bible says that family planning is bad?”

Several months earlier coastal Beseco slum was hit by tropical storm Trami. Not as bad as Haiyan, but bad enough. We tracked down Gener and his family along with thousands of others who had been were evacuated to a typhoon shelter. Around them were scenes of chaos as long lines of the hungry jostled for limited food.

“We’re starving and we don’t have enough money to buy rice,” said Gener plaintively. “We may as well go home but it’s not safe.”

As hundreds milled around wanting to be first in line if one of the charities donated food, the wife of Manila’s mayor and former disgraced President Joseph Estrada swept into the centre accompanied by reporters and camera crews. After a cursory look around, a few photos and PR grabs, she sat down and ate a substantial takeaway meal – devoured by the hungry eyes of the homeless.

It was typical of the disconnect between the politicians and the people; typical of the arrogance of the rich to the powerless and poor who make their living off the scraps of the well-to-do. But without poor who do the jobs no one else will – recycling rubbish, cleaning sewers and drains and sweeping the streets – I suspect that Manila would choke under its own rubbish in a matter of weeks.

But for the Geners of the world there is no chance to protest or bemoan the inequalities of their world. Consigned by a lack of education and a lack of action from those who could help, his family is doomed to repeat the cycle of not enough work, too little income and too many mouths to feed. If the Mayor of Manila or the Mayor’s wife could be persuaded to have a meal of third grade rice flavoured only with vinegar with them, perhaps then things might be different.

The views and opinions expressed in this piece are of the filmmaker only and not the views of Al Jazeera English.

The Slum is on Al Jazeera English on Thursdays at 2000 GMT. The first episode, Deliverance, premieres tonight