Newspaper journalism in Nigeria is an acquired but distinctly attractive taste. It’s chaotic, assertive, hugely competitive, often deeply untrustworthy, and yet it is stubbornly, determinedly outspoken.

There are 30 or so national papers available in Lagos or Abuja, and they are like 1970s Fleet Street on acid: full of wild, intense reporting, bile and partisanship. The very names derive from Fleet Street: the New Telegraph, the Daily Sun, the Daily Independent, the Mirror, the Guardian, the Daily Times, each with its own subtitle – “A Voice of Your Own”, “Sanctity of Truth”. There’s even a News Chronicle, and a Punch, which happens to be particularly good. Some newspapers are government stooges but most are either notionally or sometimes genuinely independent. Accusations of government corruption fill page after page, and sources are, to say the least, sketchy.

Nigeria Today (“The Newspaper for Nigeria”) recently carried the word “Emergency” in 36-point type across its front page, above a picture of a weeping child. Underneath was the headline “11 Chibok girls to die soon”. Chibok, you recall, is the small town in north-eastern Nigeria from which, three months ago, 276 girls were abducted by the extremist Islamist movement Boko Haram.

The opening sentence was a masterpiece of dodgy writing: “If the expected exchange negotiations between the Federal Government and the intermediaries of the Boko Haram insurgents fail, the sect may look to kill the abducted Chibok girls in batches, an authoritative independent source has revealed.” It goes on, “The killing of the first batch of nine to 11 girls may be on video before the end of August.”

This is a rather artless example of the kind of reporting British newspaper readers have long been familiar with: the “Stands to reason/Well, they’re not going to deny it, are they?” school of journalism. Still, just because the source sounds questionable and the piece is full of ifs and maybes, that doesn’t necessarily mean the basic assumption of the article is wrong. The fact is that for three months the Nigerian government has done nothing serious to get the girls back, and there is no sign that this is likely to change. So there must be a danger that Boko Haram will start killing some of them in order to get the government’s attention, just as Nigeria Today suggests.

The Nigerian president, Goodluck Jonathan, is a pleasant, unassuming and often rather unworldly character who habitually wears a hat that makes him look like a jazz pianist. As the father of two daughters of his own, he has promised again and again to get the girls back; but there is no indication that he might be able to do so.

His wife, Patience Jonathan, is a tougher proposition. Being the first lady of Nigeria doesn’t give her any legal powers, yet she is reported recently to have ordered the arrest of a campaigner from the Bring Back our Girls movement who came to see her on behalf of the girls’ parents; Mrs Jonathan seems to have expected the parents to come in person, and got annoyed. She has been quoted as accusing Bring Back Our Girls (BBOG) of fabricating the abductions in order to give her husband’s government a bad name.

The campaign to get the girls released has run into the swamp of Nigerian politics: the worst thing that could possibly happen to it. As Malala Yousafzai, the Pakistani schoolgirl and education campaigner, arrived in Nigeria on 12 July she thought she had managed to persuade President Jonathan to have his first meeting with the girls’ parents. He did indeed agree but the meeting didn’t take place, because the BBOG campaigners insisted on being there, and persuaded the parents not to go.

Malala, who is only 17, was reduced to tears, begging the campaigners and the Chibok parents by Skype link to see the president after all. But even though her plane to Paris had to be delayed while the argument went on, she left without getting anything agreed.

Meanwhile, the girls are still being held prisoner in the extensive Sambisa Forest, near Nigeria’s border with Chad. If the president and the parents have been finding it so hard to hold their first meeting, what chance is there of ever negotiating the girls’ freedom with Boko Haram?

The main trouble is, President Jonathan doesn’t have many cards to play. If this happened in some other country, the national army would go in and bring the girls back. No doubt there would be an all-out battle and many of the hostages would be killed in the effort, but at least the crisis would be resolved. Sadly, the Nigerian army doesn’t seem to be up to the job nowadays. It enjoys a good reputation abroad because of the various jobs it has done for the UN in different parts of the world. It’s had good training, and it’s still got the British tradition of spit-and-polish.

But I’ve travelled in Borno in the north-east, where Chibok is and where the girls are still being held, and I’ve seen how little of the area the Nigerian military controls. Even in Maiduguri, the state capital, there are frequent attacks, and the army scarcely maintains any roadblocks in the streets to search the cars that travel round.

This is not an army that is capable of a broad assault on a remote forest on the farthest edges of its territory. Boko Haram doesn’t control Borno State, but it has the men and the logistical support to attack anywhere it wants in sizeable numbers, and the Nigerian army doesn’t have the means to stop it.

Nor can Nigeria rely on help from foreign troops. Britain, the US, France and China have offered support, but it is planning, logistical and intelligence help, not fighting soldiers. If there are a few SAS men or Rangers on the ground there, which isn’t impossible, their job is reconnoitre, not to free the girls. As for the satellite surveillance that was supposed to pinpoint the whereabouts of the girls, it looks as though the British, Americans and Chinese have all been reluctant to share too much with the Nigerians, because they don’t trust their security.

President Jonathan has an alternative: to do a deal with Boko Haram to buy the girls’ freedom. The basis of such a deal is perfectly clear. Boko Haram kidnapped the girls in the first place in order to have people to exchange for its militants, who are in Nigeria’s jails in quite large numbers.

But Jonathan can’t do that. Even without the hundreds of imprisoned guerrillas, Boko Haram controls whole swaths of north-eastern Nigeria. With them, it would be even more dangerous.

It is said in the capital, Abuja, that the countries that have offered logistical help to President Jonathan have warned him not to think of doing any deal with Boko Haram. For the British, French, Americans and Chinese it would be regrettable if the Chibok girls didn’t make it home, but it would be far worse if Nigeria started to collapse.

Not that President Jonathan does seem to be contemplating any deals. Have you had any contacts with Boko Haram? I asked a friend who was supposed to be one of the president’s ad hoc negotiators. He shook his head wordlessly. 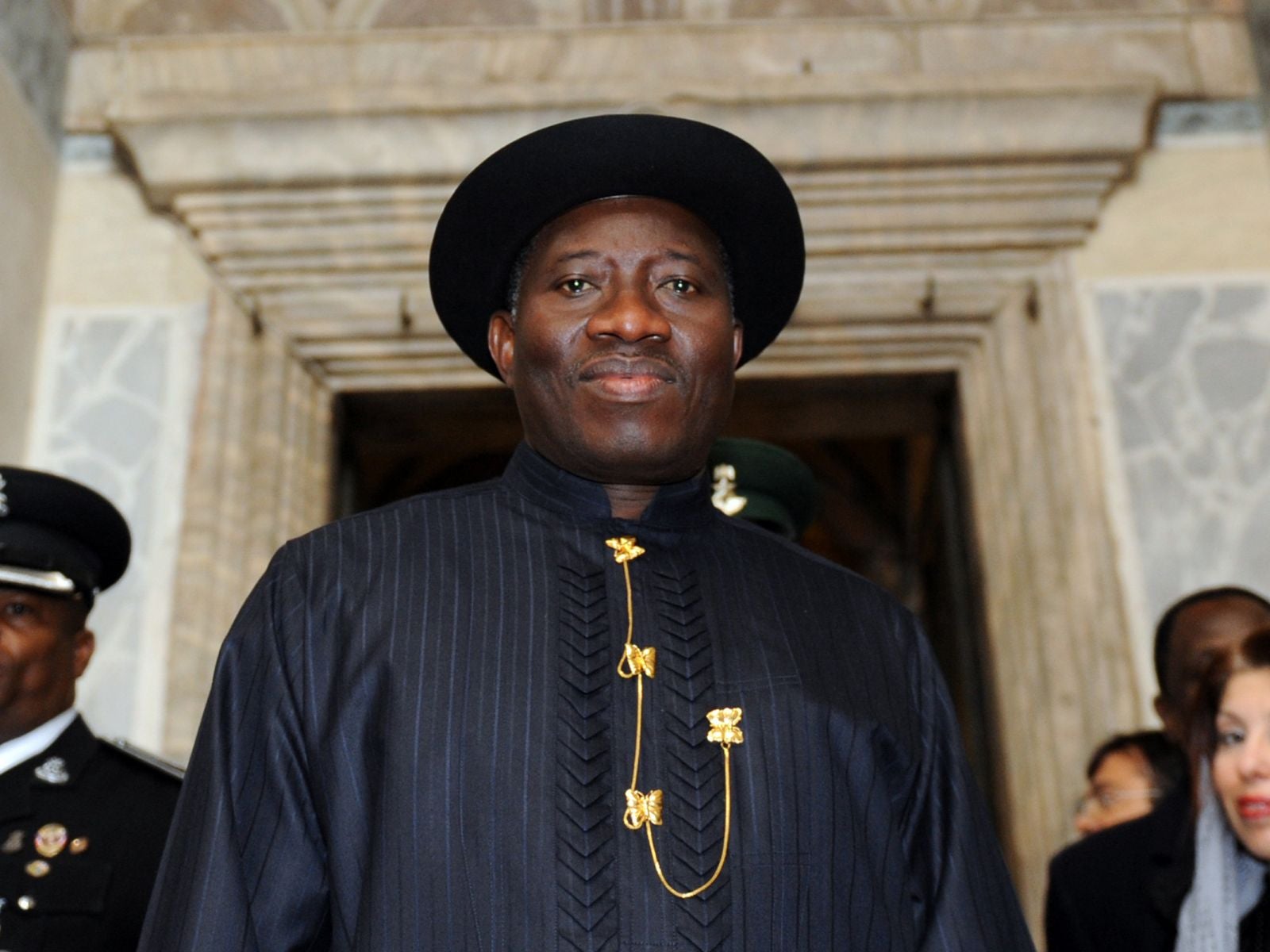 If Goodluck Jonathan can’t free the girls, and he can’t do a deal with Boko Haram to get them released, what does that leave for him? Nothing. And nothing is what has been happening for three months now. To put it at its crudest, the president and his government must be hoping that the world will simply forget about the girls.

We can be sure that this is something that pains him, as a father, as a politician and as a devout Christian; there are suggestions that Boko Haram is forcibly converting the girls, most of whom are Christians, to become Muslims, and that it has already handed over some of them to its fighters to be their “wives”. However, Goodluck has a job to do, and that job is to try to keep Nigeria together.

The tactic of allowing the world to forget the Chibok girls has worked twice. It was a fortnight before President Jonathan felt obliged to make his first statement about them, and it was only the success of the BBOG campaign in persuading Michelle Obama and David Cameron, among others, to hold up its hashtag sign on camera that brought a flood of media attention. Soon, Michelle Obama and David Cameron had other things to do, and the attention of the world’s media quickly turned elsewhere; until, that is, the tiny form of Malala Yousafzai arrived in Abuja to remind everyone that the girls had now been missing for three months.

Normally, I would be instinctively sceptical about 17-year-old girls who get that much media attention and who have days named after them by the UN. But Malala is different. She is self-possessed, articulate and effective, a remarkable person, whose injuries after being shot in the head by the Taliban two years ago have been overcome with a combination of brilliant surgical care in Birmingham and her own courage.

Poor Goodluck Jonathan: Malala was the last thing he needed. But here she was, reminding the world that he had never got round to meeting the Chibok parents, and recalling that Michelle Obama and David Cameron had once shown an interest in getting the girls free.

What’s going to happen? Sadly, it’s hard to think it can mean much good for the girls, or for Goodluck Jonathan, either, with a presidential election scheduled for next year. He seems to have no strategy for dealing with Boko Haram, which is growing in strength and effectiveness. What is most likely is that he will try for the third time to forget about the girls.

And how will Boko Haram respond to that? Nigeria Today’s source, if it really existed, suggested that the movement would start killing the girls and sending round the videos. Having already had to sit and watch one Boko Haram clip of some poor prisoner being slaughtered, I pray I won’t have to see another. But, prayer aside, it’s hard to imagine what other hope the devout Goodluck Jonathan has.

John Simpson is world affairs editor of the BBC. He will be writing regularly for the NS