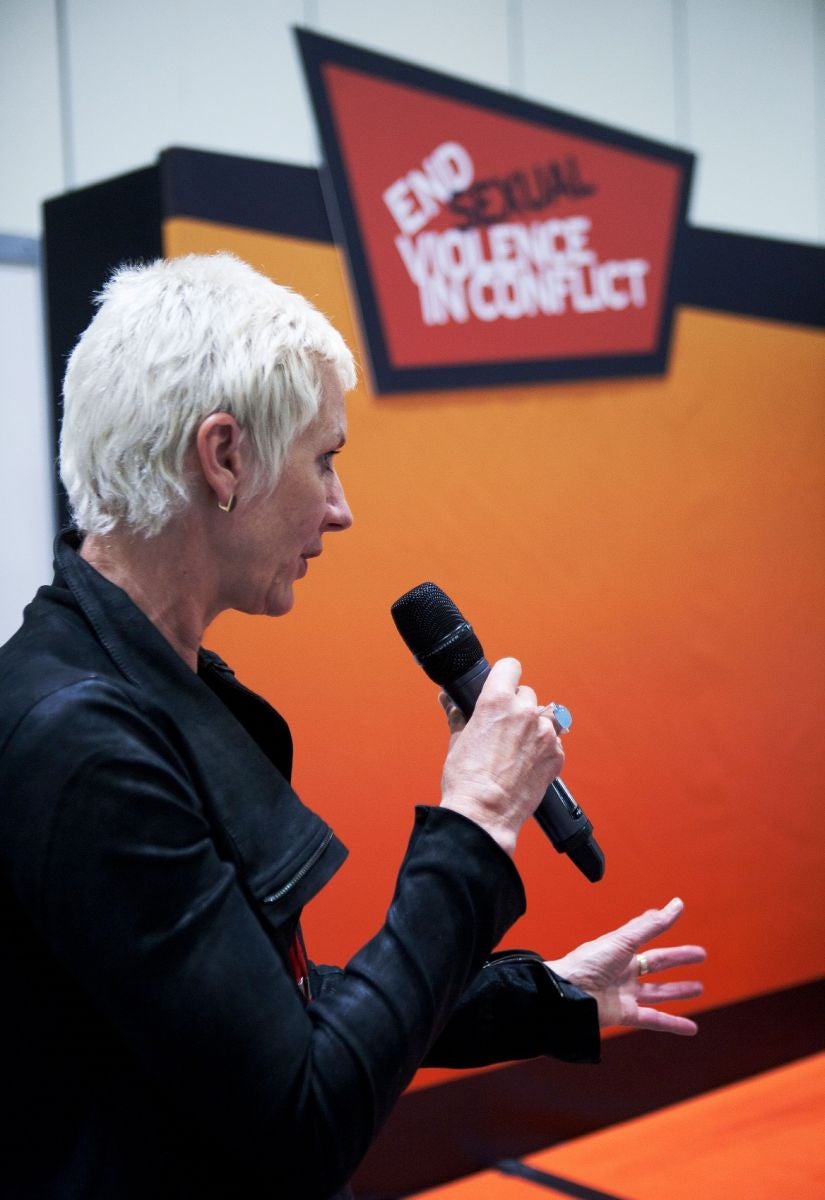 “How is he a Tory?” cries Madeleine Rees when I meet her, before she even sits down. “I find it shocking. He totally gets it!”

She is the human rights lawyer who has been advising the Foreign Secretary William Hague on his work against sexual violence in conflict. She has just been awarded an OBE for services to human rights – particularly women’s rights and international peace and security. I meet her on the last day of the global summit, where she has just met with co-chairs of the conference: the Foreign Secretary and UN special envoy Angelina Jolie, to discuss the summit’s findings. She also met Jolie’s husband and global superstar Brad Pitt. She grins at this revelation, but is more fixated with Hague’s apparent astuteness on rape as a tool of warfare.

“Some of the things that William Hague articulates, especially in relation to this issue of sexual violence against women, he is explaining in terms of women’s economic empowerment, the need to create structures,” she enthuses. “And he totally gets it. Which is wonderful. And irreconcilable with the Tory administration, some would suggest…”

Sitting in a sticky meeting area within the warren of garish lanyards, plastic coffee, and free biros that is the ExCeL exhibition centre in London, Rees is dry but impassioned about the conference’s cause. She has worked in the area for over 20 years, as a human rights lawyer on discrimination cases, for the UN and elsewhere.

She currently heads the Women’s International League for Peace and Freedom, a Geneva-based NGO. It was Rees who blew the whistle on the complicity of some UN officials in prostitution and the sex-trade in Bosnia, where she worked with victims of rape following the war.

A complacent lack of concern given to the subject of rape in armed conflict has recently been exposed by media voices suggesting Hague should have been concentrating on Iraq rather than “hobnobbing” with celebrities at a sexual violence summit. In this way, the event highlighted the absence of attention paid to this aspect of warfare, as well as allowing people to speak up for its victims.

Rees’ thesis is that everyday sexism and rape in warfare are on a continuum, and until we tackle a worldwide “system” that treats women as secondary, rape will “work” – will be viewed as acceptable by the perpetrators – as an act of war.

Rees suggests it could be a good idea to “stop talking about gender, because gender so far has only ever been seen as ‘women’. Like, what men do is normal and then you add ‘gender’ on, and it’s women,” she sighs. “What we should be looking at is replacing, perhaps, the word ‘gender’ for ‘power’. And then we have a completely new conversation of who’s got it, who hasn’t got it, and the vast majority of that power is occupied by men, but what about the rest, too?”

She argues that thinking in this way might give us “a clue” as to why men who don’t have power then use violence against women “because of their absence of power”. As an example, she refers to the terror to which women can be subjected in refugee camps, where she describes the men as, “distressed at having not fulfilled their masculine identities as protectors, warriors, providers for their families, so they become extremely violent.”

For a lawyer, it must be rather frustrating to rely on such wholesale cultural change, rather than international military law, which she admits can be “extraordinarily difficult” to implement. She suggests social policy and education are what can bring about such a structural transformation.

“Essentially what we’re looking at is: do we want boys to be brought up to fulfil the sort of role models that have been created for them by current social structures? Is that what we want? Are we still constructing little soldiers for Queen, country and Empire?” she asks, drily. “Or are we actually having a more civilised conversation about militarisation, which is a logical consequence of creating stereotypes of masculinity? How should we be bringing up little boys so that there’s not this automatic assumption of privilege and power?”

Rees admits this focus on young men does jar with the style of the “old feminist, always confronting men – it’s not about men, it’s all about us”, an approach with which she says she was brought up. But she clearly believes in this route to protecting women both in and outside warzones.

Cameramen below us suddenly begin surging to the entrance of the main exhibition centre. They’re probably swarming around Jolie and her husband. Rees raises an eyebrow. “Poor woman,” she exhales. “I don’t know how she has the patience”. Yet on a subject that unites Conservative ministers, celebrities and veteran human rights campaigners like Rees – around which stigma, sexism and stupidity nevertheless endure – it may be time for some impatience.