Whether it’s a woman issuing a racist tweet heard around the world; bigots judging a woman’s abilities, whether as a sportsperson or journalist, on her looks; an irritable (but evidently non-existent) fellow passenger on a plane; men making silly sexist comments at a tech convention; high school students making racist remarks about Obama’s re-election – all were targets of public shaming through digital media, most predominantly social. It’s both tempting and easy to shame such people with modern digital platforms (a retweet, capturing and storing screenshots, etc). But even when such people are so obviously morally wrong, we must question the efficacy of public shaming – as a form of response.

That it’s easy to use social media for public shaming isn’t enough reason to do so. Bigger questions are at stake: proportionality is an essential factor in trying to redress wrongs, since we don’t get moral immunity for being morally right. Shooting someone who takes your parking space, for example, isn’t right just because the thief was wrong.

Wrongs shouldn’t go unpunished, of course, and just because we should question the practice of public shaming doesn’t mean we never respond to wrong or bad behaviour at all; it only means we should act wiser and better – it means reflecting on whether initiating or participating in public shaming is actually a good option.

There appear to be two major problems with public shaming.

Problem 1: Public shaming becomes – and/or is – another name for mob justice

With digital platforms and followers, pointing at something can be the same as shooting a magic spell made of an outraged audience.

Let’s take a fairly innocuous but very public example. After Nelson Mandela’s death, an alleged Paris Hilton tweet was retweeted and posted and mocked widely. Supposedly, Hilton thanked Mandela for writing the “I have a dream” speech. People quickly informed Ms Hilton that she was all kinds of idiot, all kinds of female anatomy parts, all kinds of waste product. 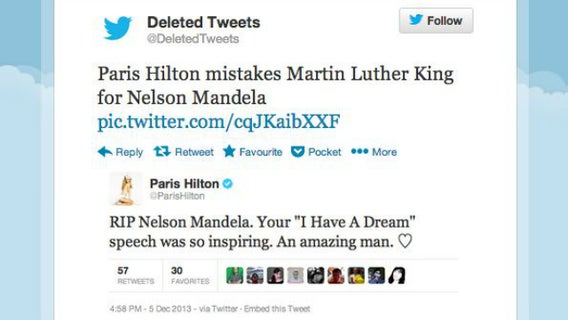 Annoyingly for the name-callers (including the prestigious Foreign Policy), there is no evidence to suppose Hilton ever sent such a tweet. But to those doing the shaming, did it really matter? All that mattered was a reason to deride, to hate, to show how much better and smarter these people were than a “dumb reality show star”.

We are better than her.

By displaying examples of racism or sexism or other forms of bigotry; by showing kids who mock Olympic athletes or any of the people listed in the first paragraph; our public shaming invites us to form a conglomerate of the morally righteous to beat these people with our Ethics Sticks. We respond sometimes with even worse messages – expletives, namecalling and threats – than what was initially articulated. But no hypocrisy is noticed because we, after all, are morally right and we can, therefore, do no wrong. Just look how many others are doing it, too!

If you think you have moral immunity in how you respond to an act you deem wrong, if you’re bolstered by witnessing mutual reaction and views from others to the wrong act, this is essentially mob justice.

And mob justice is not, in fact, justice due to the inherent unfairness.

Taken together, those “accusing” have voices which vastly overpower the accused, meaning that there is no way for Hilton to respond to the accusation. In the case above, when she and others pointed out that she hadn’t sent the tweet, few people corrected themselves.

It is an essential feature of modern law to presume innocence and give an accused individual the ability to respond on an equal platform to allegations of wrongdoing. But this cannot be the case when everyone is more interested in laughing at and mocking and threatening an alleged wrongdoer than in assessing whether the wrongdoer is actually guilty.

Problem 2: No regulation, no middle ground, no persons

Mob justice’s worrying element then is precisely that the “accusers” are also the judges, the juries, the executioners: there is no one “above” the group. The idea of a defence is unknown, there is only someone to be punished by shaming.

This inability to respond should worry all of us. Celebrities at least have professional managers and PR firms, who can work round the clock; they have secure enough incomes that, even after such public mishaps, they won’t be destitute.

But for us mortals, we have no such luxury.

If you are some unknown person who is terrible at making crude jokes, anyone can decide to target you for shaming. Including Buzzfeed reporters with over 100,000 Twitter followers. Many of us don’t have the million-dollar lawyers and PR firm to help us respond: we’re one person, fighting down the voices of the self-righteous many.

When I pointed out that Justine Sacco was a target of hate, many emailed expressing dismay that I would compare Sacco to other bullying victims. “She deserved everything she got!” I was told. Her tweet made her deserving of death and rape threats, of being followed and tracked, of being photographed by a stranger? They claimed yes: because “She was wrong”, remember, and they were right.

Apparently, there can be no mistakes on the internet, made by a fallible human, with emotions and spur-of-the-moment responses. Either you’re with them or against them. This is the digital mob and its form of punishment can turn on anyone: no matter how famous; no matter how deserving. Proportionality is as important as truth – in other words, somewhat irrelevant.

This should be worrying to all of us, even if we’re not racists, homophobes or other kinds of bigots.

We forget that, by definition, platforms of all kinds create a caricature of the user. There are no Sauron-like villains, emitting evil and hate – it’s human being, people with failures and loves and hates and passions and families and friends. Yet, we see a single tweet and judge them; we see a single blogpost and determine his or her entire worth.

There’s no need to be a racist to see that wanting an alleged racist to be raped is wrong: we’re still dealing with people, not a picture on your monitor. With no bigger authority, there is no way to direct this outrage in ways that might actually be beneficial, to call a halt to furious cries. Consider, for example, how during the outrage of Justine Sacco, someone bought a domain with her name and redirected it to an Aids charity. In one swoop, it showed the idiocy of Sacco’s tweet and got people to channel their rage into a beneficial direction. This didn’t just say “Look at this dumb racist!” and let slip the pugs of outrage.

None of this means outrage is bad. It just means unchecked outrage – comprising only of scorn – which so often results from publicly shaming, is unhelpful, if not a hindrance. There are better ways to respond than knee-jerk anger, even if the other person is wrong (or you’re told he’s wrong by someone you regard as an authority.)

Being morally right is not enough. We must be able to convey that morally: responding to a racist with a snarky joke or thoughtful blogpost is miles away from responding with a fist. Responses don’t have the same moral weight just because the responses are defending a (proper) moral position.

And public shaming, as we’ve noted, is highly problematic: there is no encouragement to ascertain truth (Hilton didn’t confuse Dr King and Mandela, but who cares?); no dialogue is created, only a target painted on someone’s back. Even if you abhor threats, you can’t control all people’s reactions nor who will see your tweet, your Facebook post, your photo of the racist, sexist, etc. And, even if someone did make a public fool of himself, it’s hard to support the pile-on of threats and responses when it takes a serious toll on actual people’s lives, when there’s little evidence his bad behaviour significantly harmed anyone. There will always be people who hold stupid beliefs, but public shaming doesn’t seem like a moral way to respond when it’s dependent on an unregulated “public”.

Are we silent on racism? Of course not. Nor are we silent about sexism or other forms of bigotry, just because we don’t publicly shame. There are many ways to respond and, if we genuinely care about combating bigotry and stupidity, we must assess whether our responses are themselves helpful to the cause.

Again, just because you’re responding to racism or sexism doesn’t make your response right. I’ve seen no good come of publicly shaming someone, when public shaming is the sole response. Sure, someone is also shamed after being rightfully convicted, fired, etc, but there ‘justice’ wasn’t merely a retweet.

(Digital) public shaming as the sole method of response, in terms of justice, should not be implemented. As perhaps a by-product of other kinds of justified responses, we may support it. However, I am still hesitant and, if I wish to highlight terrible beliefs or views, I default to anonymise the person (as much as possible), when using social media.

When there can be an equality of platform, like say blogs or columns, this becomes irrelevant – but there, inherent unfairness is potentially undermined (and it’s not about just threatening the other person!).

We must remember that, even though they may act bigoted, we’re still dealing with people, who have friends, family and loved ones; we must remember that combating bigotry takes on a moral dimension not only in terms of beliefs but responses.