Of the many remarkable things about R&B singer Frank Ocean’s announcement that he is gay, let’s start with his choice of words. Last night he wrote on his Tumblr that what he was about to post was originally intended for the thank you section of his forthcoming album, Channel Orange, but had been brought forward because of gathering rumours about his sexuality.

He then posted an exquisitely moving account of his first love affair with a man. “I don’t have any secrets I need kept anymore,” he writes. “There’s probably some small shit still, but you know what I mean. I was never alone, as much as I felt like it… as much as I still do sometimes. I never was. I don’t think I ever could be.” 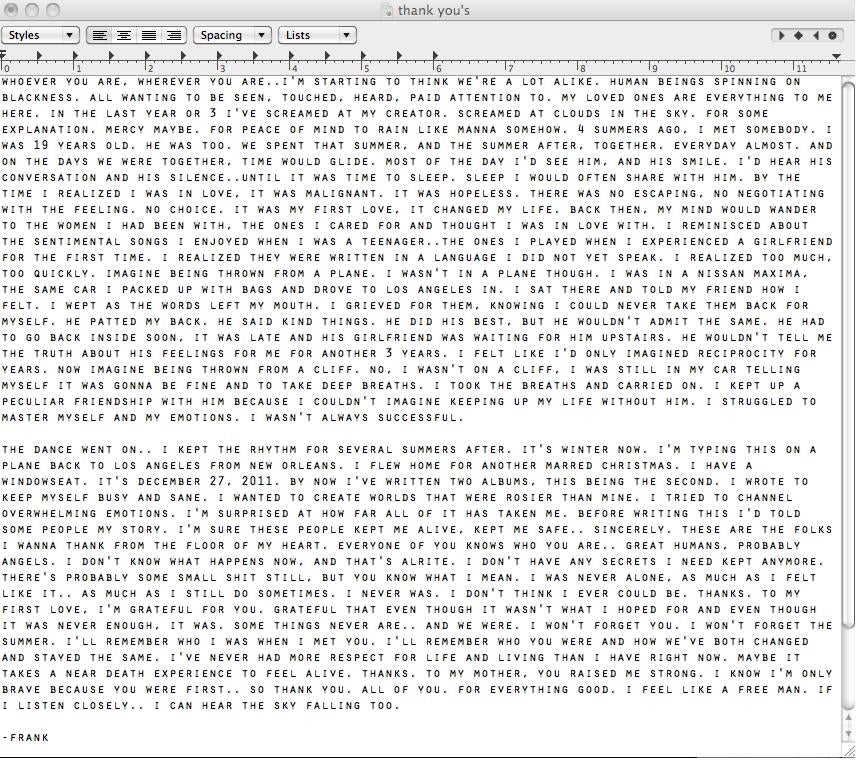 Ocean’s poetry and precision makes it a personal statement more than a political one, worlds apart from the stilted, formal language customarily used by celebrities coming out of the closet: remember Ricky Martin’s “I am a fortunate homosexual man” two years ago? You don’t have to be gay to identify with its sentiments. You simply have to know what it feels like to be in love.

Missing presents and parcels in bins: why are private delivery firms so terrible?

But despite the quiet intimacy of the language, Ocean’s statement has made a big noise. For years, various big rappers, both male and female, have attracted speculation over their sexuality but none have confirmed it. Earlier this year underground rapper Lil’ B announced his new album would be called I’m Gay but quickly backtracked by adding a parenthetical “(I’m Happy)” and avoiding the issue. Now, in a stroke, the landscape has changed.

It should be noted that Ocean is a singer rather than a rapper and that the hip hop crew he’s affiliated with, Odd Future Wolf Gang Kill Them All, is an unorthodox outfit which, despite its excessive fondness for the word “faggot”, already has one out member: female DJ/producer Syd Tha Kid. But Ocean has a major label deal and appeared on Jay-Z and Kanye West’s colossal Watch the Throne album so he has enough of a profile to qualify as the first out, gay star in the world of urban music. Hip hop mogul Russell Simmons calls it  “a game-changer”: “Today is a big day for hip-hop. It is a day that will define who we really are.”

It comes at an interesting time for LGBT musicians. Until this year, an openly gay artist had never topped the US Billboard charts: the likes of George Michael and REM’s Michael Stipe did so long before coming out. But in May, former American Idol runner-up Adam Lambert ended that drought with his album Trespassing. In the same month Jamaican dancehall artist Beenie Man recorded a video apology for his previous homophobic lyrics, while Tom Gabel, of Florida punk band Against Me!, declared that he would henceforth be known as Laura Jane Grace, making him not exactly rock’s first transsexual but its first arena-headlining one.

But Ocean’s move is still courageous. Openly gay musicians rarely fare well in the US; hip hop/R&B, where exaggerated heterosexuality is the norm, is uncharted territory. Even though the initial online response has been overwhelmingly positive, not every listener will be happy listening to Channel Orange, or last year’s brilliant online mixtape Nostalgia, Ultra, knowing that the love songs are about another man. Ocean also risks being forever defined in the public eye by his sexuality. Neil Tennant of the Pet Shop Boys once told me why he didn’t come out until 1994: “One of my reasons for not coming out [earlier] was that you get typecast, so you become ‘gay pop star Neil Tennant’, and I didn’t used to be that. People use the gay thing to marginalise you.” About his lyrics up to that point he said, “I always quite liked that ambiguity. Now people just say, Yeah, it’s gay.”

Time will tell whether Ocean’s candour affects the fortunes of Channel Orange, or whether he inspires some high-profile closeted performers to follow suit. But his impact on the wider world of hip hop, R&B and beyond is undeniable. Research regularly shows that the key factor in changing people’s attitudes to issues such as gay marriage is having an LGBT friend, colleague or family member: personal experience informs the public sphere. Conversely, gay celebrities can influence private views and deeds. Ocean may just have helped countless gay teenagers to realise that they are never alone.