Turkey’s recent, bloody invasion of Rojava is codenamed “Operation Olive Branch”. It’s a cruel misnomer, and not only because scores of civilians have died in Turkey’s relentless and indiscriminate shelling of the progressive, Kurdish-led autonomous region.

Afrin is the isolated western enclave of Rojava  that’s currently under assault from Turkish artillery, jets, tanks and Turkish-backed jihadist militias. It’s famed for its four million olive trees – just as the larger eastern province of al-Jazira is “the breadbasket of Syria”, famed for its wheat.

But images of rolling olive groves and wheat blooming in the rich basin of the Euphrates river belie a history of wealth extraction and impoverishment under the Assad regime. Colonial-style oil and wheat monocultures, Turkish control of water supplies and five years of war have starved the earth.

Kurdish-led ecological committees and like-minded international activists are working to “Make Rojava Green Again”, in the words of a new internationally-focused campaign to plant tens of thousands of trees, and work with local farmers to build co-operative ecological structures.

The BBC’s The Responder: Not just another police drama

Talk of tree nurseries seems incongruous in a warzone. But the land tells the story of the Kurds’ long repression – and the immense political and cultural challenges they face as they attempt to build a democratic, federalist alternative from the ashes of Syria.

“The attacks from the Turkish state are directly against the idea of an ecological, democratic society based on gender equality,” international volunteer Stefan tells the New Statesman over an encrypted phoneline. “Stopping this project means stopping the fight for a different society.”

Kurds are one of the largest ethnic minorities worldwide without a state of their own, instead largely inhabiting portions of Turkey, Iran, Syria and Iraq. Their language and culture has long been violently repressed – Kurdish-language education was banned in Syria until the outbreak of civil war, for example. In popular adage, they have “no friends but the mountains”.

The Assad regime used agriculture to wring Kurdish land dry, and keep its farming inhabitants reliant on state support. “Under the Syrian regime it was more or less forbidden to plant trees,” says Ciya, a member of the self-administration’s ecological committee in al-Jazira. “The regime wanted us to grow wheat.” Kurds say the regime enforced deforestation even in the streets of cities like Kobane, as a method of subjugation. 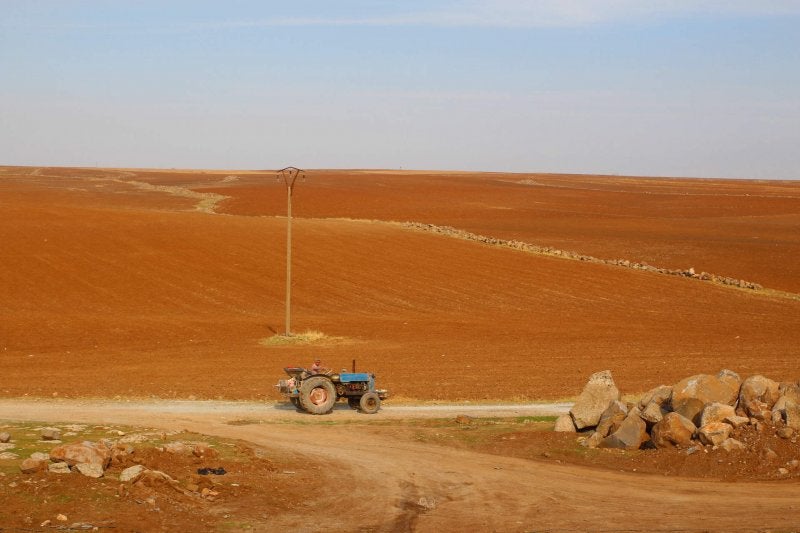 Monocultures put the population at perpetual risk of famine, and necessitate large amounts of chemical fertilisers and pesticides to keep the soil artificially alive – a short-term solution with ruinous results. A drought in 2007-2008 hit half-a-dozen neighbouring countries, but only in Syria did it become a full-blown humanitarian crisis.

Kurdish regions of northern Syria were kept dependent on Damascus for other vital necessities, and Kurdish people forced to travel into metropoles to find work.  “Under the Assad regime, the people were really disconnected from their land,” Stefan says.

Alone on an island prison with a thousand guards for company following his 1999 capture, the venerated leader of Turkish militia group the Kurdistan Workers’ Party (PKK) Abdullah Öcalan modified his belief in a violent Marxist-Leninist revolutionary vanguard.

Instead, he developed a libertarian ideology of “democratic confederalism”. He calls for a “soft” revolution expanding through the state, with people joining local committees and co-operatives until this “flexible, multi-cultural, anti-monopolistic, and consensus-oriented” structure becomes the system of government.

When Assad started pulling forces out of Kurdish-majority regions in 2012, the PKK’s Syrian avatar (the PYD) took control of swathes of the countryside. The region is now formally known as the “Democratic Federation of Northern Syria”, and informally as Rojava – or “West” in Kurdish.

Perversely, ISIS’ arrival in the area – and their famous defeat by Kurdish-led militias in Kobane – gave Rojava the name on the world stage and the limited military support from the United States it needed to survive. The Kurdish PYG and PYJ militias were lionised for defeating ISIS, even as their intimate allies the PKK continue to be listed as a terror group by the UK, EU and USA.

You’ll have seen orientalising clickbait about “the women fighting ISIS”, but feminism is one of three key tenets of democratic confederalism, along with the grassroots democratisation of government and ecological principles.

British leftists who’ve returned from Rojava say the “woman’s revolution” is the most visible and successful element.  All-female militias aside, each of the thousands of local committees must have 50 per cent female representation – a principle extending to the highest offices of government. (Meanwhile, committees working on domestic issues must have a minimum 40per cent male representation, so men don’t slack off from addressing “womanly” subjects like childcare).

In a historically highly-conservative region, newly-legalised divorces have skyrocketed, while a “woman’s house” on every street provides a safe space as women engage in new educational and co-operative programmes.

Meanwhile, those committees provide a forum to “solve daily questions, organise yourself in a democratic, self-administrated way… [for] society to become conscious of itself again”. For now, they’re the junior partner in a dual-power system with a more traditionally top-down administration, but they provide a forum for ordinary citizens to vote on issues of region-wide significance.

It’s a slow and difficult process, with some neighbourhoods and villages engaging enthusiastically while others remain loyal to Assad or unconvinced of the revolution’s liberal merits. But everyone gets cheap bread and oil, and the flight of millions of refugees into areas now being pounded by Turkish jets shows how highly ordinary people value the security Rojava provides.

As Stefan acknowledges, however, the “ecological revolution” is lagging badly behind. Arguments that drought caused the Syrian Civil War are easily over-stated: what is certain is that war destroys the land.

Wells and springs were destroyed by retreating Islamic State forces, who started huge oil fires to shield their flight from American bombers. Depleted uranium, heavy metals, TNT and other toxic carcinogens from spent armaments leach into the soil. 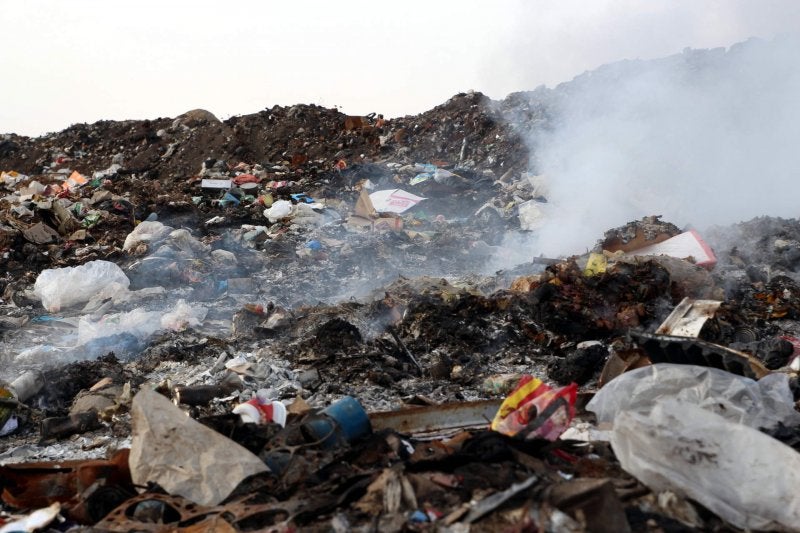 Landfill outside of the city of Derik. Photo: Internationalist Commune.

According to Alan, another Kurdish member of al-Jazira’s ecological committee, “for years now, the Turkish state has restricted the water supply by building many dams on the Tigris and Euphrates Rivers, and drilling wells along the border line.”

By cutting power availability down to 6 or 12 hours daily, the “self-administration” government of Rojava nonetheless ekes out 75 per cent of its electricity supply from hydroelectric sources. Fully renewable power would be achievable, were it not for Turkish control of their water sources – or the embargo.

Neither Turkey nor the government of Iraq’s autonomous Kurdish region allow people, aid or vital supplies to cross their shared borders with Rojava. Ecological ideals of self-sufficiency therefore take on a special urgency, even as circumstances make them all but impossible. Parts to repair and improve the hydro-electric plants cannot get into the country.

The embargo also contributes to a general economic crisis – grand composting and recycling programmes, for example, remain unrealised due to lack of funds.

On the one hand, tens of thousands of hectares are being opened up to agricultural co-operatives, led by women and young people. On the other, as this frank interview with a Kurdish economic official makes painfully clear, the co-operative or “social” economy in Rojava is still dwarfed by an oil-funded war economy.

25 per cent of crops in al-Jazira are now those – beans, chickpeas – which require no irrigation, up from only 10 per cent before the start of the “revolution.” The local committees’ educational programmes are a far cry from the dubious glamour of the battle against ISIS, but in the long run they could prove just as vital.

Westerners who go to fight – and die – in the battle against Isis are celebrated worldwide, and venerated as martyrs in Rojava itself. But increasing numbers of leftists are joining the “civil revolution” too, as teachers, doctors, engineers and environmentalists.

Some efforts have been cack-handed, for example driving malfunctioning ambulances into a region where there’s no such thing as a 999 call. A previous ecological endeavour, the “Rojava Plan”, arrived with grand and wildly inappropriate dreams to build organic fertiliser facilities and sank without a trace.

According to Stefan, the “Internationalist Commune” of civil volunteers seek to avoid these errors by understanding the revolution as a two-way process.

“The time for international help hasn’t stopped just because the war against Daesh has stopped,” he says, using the derogatory local term for Isis. His impeccable second-language English is seeded with Kurdish terms: şehid for “martyr” and tamam, or “fine”.

“Nobody would say it’s not important to fight Isis… but it’s also important to learn from and contribute to the up-building of a new society. For us Westerners, it’s really something to see the possibility of a different future.”

The “Make Rojava Green Again” project is a part of this slow drive. Even what Stefan calls their “short-term aims” will take years – planting 10,000 trees this year, and 50,000 in the next five, plus opening up a co-operative tree nursery to support local farmers. 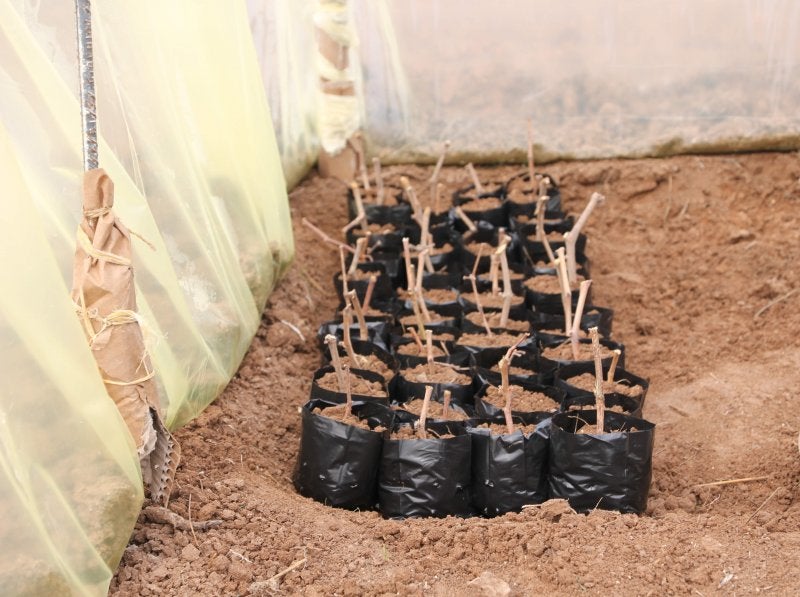 The Commune is calling for financial support, volunteers and knowledge-sharing from scientists and ecologists worldwide, as they work together with local committees and Rojava’s two co-operative nature reserves to build a revolution lasting beyond the revolutionary moment.

“In the future I will grow more trees around [my] land to keep the earth healthy, and help the other plants to grow,” says Abu Araz, a farmer who works with the Commune. Members of the Commune are already involved in civil work in Afrin, and they hope to transplant their tree-planting programmes there in the future, as “forests get destroyed, and water polluted because of the war”.

ISIS fight under the slogan baqiya wa tatamadad, or “remaining and expanding”. But they are a vanishing force now. And though other Turkish-backed jihadist forces are vying to take their place, it is the grassroots Rojava revolution which endures.