VICE. It’s pretty cool. It specialises in crazy journalistic stunts like travelling around with Isis militants, and livestreaming blind Valentine’s dates. People love to read it, and many people would love to work there. Its staff have directional haircuts, dress up as the Eighties and write in the first person. What’s not to love?

But aspiring VICE writers might want to think twice before attempting to enter this edgy empire of gonzo news journalism.

The UK news site has been at the centre of a row, as two of its apprenticeships were erroneously advertised on the government-backed website DV8 Apprenticeships as paying £109.20 per week. That’s under £22 a day. £2.73 an hour. For a year. In London. 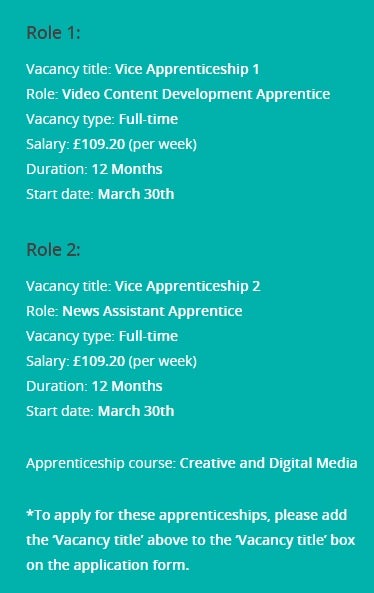 To put this meagre salary in context, the minimum wage in the UK is £6.50 an hour, which comes to £260 for a five-day, eight-hour-a-day working week. And the London living wage, which employers are encouraged, but not mandated, to pay is £9.15 an hour. Because of the higher rents and cost of living in London, the London living wage is encouraged as a way of reflecting this.

But it turns out this is not what VICE is offering its apprentices after all, and a spokesperson tells me they were “appalled” at finding out that this was the salary being advertised via DV8. It was a mistake. Actually, VICE is offering an annual salary of £11,400, and the job ad has now been corrected: 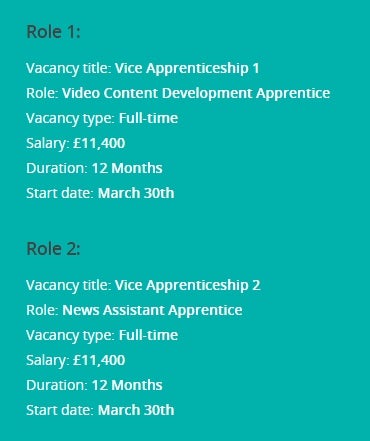 This is around double what the website suggested it was initially offering its apprenticeship applicants. It breaks down to £950 a month, £219.23 a week, or £43.85 a day. A spokesperson tells me: “In factual terms, this is what we’ve always said we’d be paying our apprentices, and it’s approximately double the government’s minimum salary for apprentices”, decrying the “hysterical Twitter storm” this morning over the initial job ad.

Here is VICE‘s official statement on the matter:

The salary for the VICE apprenticeships on DV8’s site were incorrectly posted against the minimum wage requirement. VICE will be paying its apprentices nearly double the minimum legal requirement with a salary of £11,400 to cover 4 days / week training at VICE UK’s office and one day / week in college . . . This is in keeping with VICE’s ethos to provide meaningful opportunities to young people from a diverse range of backgrounds trying to get into full time work.

And DV8 has also pointed out the mistake:

The vacancy for Vice’s apprenticeship was incorrectly posted at the government’s national minimum salary, which is £2.73 per hour; however, many apprentices earn significantly more.

Vice is offering £220 per week which is significantly more than the minimum apprenticeship wage. This is now correctly listed on the Dv8 site as an annual salary of £11.4k.

VICE‘s spokesperson was unable to say how many hours the apprentices would be doing each day, but if we assume it’s eight-hour days, that’s £5.48 an hour. Lower than the minimum wage. (The apprenticeship is advertised as “full-time”, because the four days a week and one day in college is part of VICE‘s package, and what the apprentice is being paid for, but even if we calculate the hourly rate for a four-day week, it comes to £6.85, which is still lower than the London living wage.)

When this mole suggested to VICE that this is a very low salary for young people working in London, the spokesperson responded: “This is what the offer always was, and we think it’s really fair for paying for four days in the office and one day every week for going to college. We have always invested in young people. ‘Work’ is the wrong term anyway; it’s on-the-job training. It’s a training position, not a job or an internship.

“We think double the legal minimum for this training opportunity is really competitive.”

And the sad thing is that even if VICE were paying £109.20 a week, it would be allowed to get away with it. Because it’s within the rules.

An employer hiring an apprentice has to agree to pay the Apprenticeship National Minimum Wage, which is £2.73 an hour. However, this rate is only for apprentices aged 16-18 and those aged 19 or over who are in their first year of work. All other apprentices are entitled to the national minimum wage for their age. 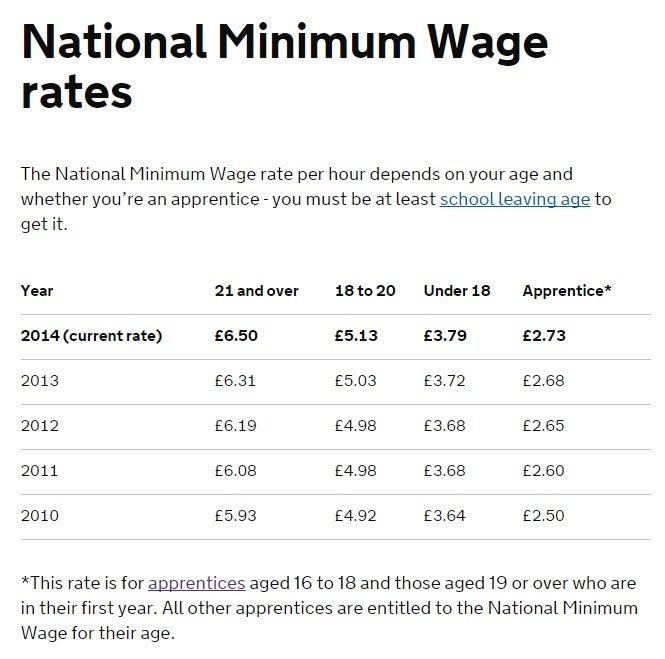 So any company wanting to pay their apprentices the absolute minimum for the maximum amount of time could pay £2.73 an hour for a whole year.

The London Assembly‘s Economics Committee hints that the minimum wage for apprentices is too low, and highlights that City Hall apprentices are paid the London living wage:

“In doing so he [the Mayor] recognises that the higher the wage, the better the calibre of candidates the business offering the apprenticeship will attract . . . [we] would urge London employers to look to move towards paying apprentices the London Living Wage.”

So although VICE is paying double the statutory pay, it is still a great deal lower than the living wage, and not even level with the national minimum wage. This mole just doesn’t think that’s good enough for a publication with the Twitter bio “We suck less than most other companies”, which once ran a piece condemning unpaid journalism internships with the headline: “The Exploited Laborers of the Liberal Media”.