My phone contract is up in a couple of months, so I’ve been casting around for what to get to replace my creaking iPhone 4S. The one that caught my eye was recommended by a friend, which is fitting, as most people who have heard of it are likely to also have heard via word-of-mouth – the OnePlus One. (The company is called OnePlus, the phone model is One, and yes, it’s more confusing than it needs to be.)

It’s sold as a “flagship killer” – that is, it’s cheaper (the top model is only £269) than the best phones from the big manufacturers like Apple, Samsung or LG, while also being just as powerful. Despite its small size and grand objectives, reviewers have found the One to be an excellent phone. It uses CyanogenMod, a security-conscious open source mod of Android, as its OS, giving it geek cred, while OnePlus has repeatedly said that its aim is to “create the best possible product, period” without gimmicks or aesthetic compromise. As far as smartphones go, it’s one of the best.

I don’t have a OnePlus, though, because buying one isn’t as easy as going into a shop and asking for one, or ordering from a website. You have to be “invited” – that means getting hold of an invite code, valid for 24 hours, that gives you the chance to buy a One direct from OnePlus. Every week or two OnePlus runs competitions or giveaways on its website where some lucky people who click first, Glastonbury ticket-style, get invites, but if that doesn’t work you’ve got to find a friend who’s got a One, because each new owner gets given some spare codes to share (and they, in turn, get some to share, and so on).

This is not a terrible thing, mostly. Small companies often struggle to fill orders if their products get popular faster than they can ramp up production (this is a particular problem for big Kickstarter projects), so the invite system becomes a kind of brake on growth. If everyone who wanted a One ordered one, then a significant proportion of them would then cancel their orders as it became clear it would take months for that order to be honoured, losing OnePlus money. Better to limit those orders to a rate the company can handle, with the side effect of the invite system becoming a kind of marketing tool in itself.

People compete for invites, they’re auctioned off on eBay, and the OnePlus customer support forums have become a heavily-populated purgatory where thousands of people kill time waiting for their number to come in. In fits and starts, it’s kind of worked, maintaining the hype for this unknown little company – one which specifically claims: “We don’t box our users into categories based on age, gender or geography. Our target user is simply anyone who wants the best, those who don’t want to settle.”

So when this happened earlier this week it was somewhat depressing: 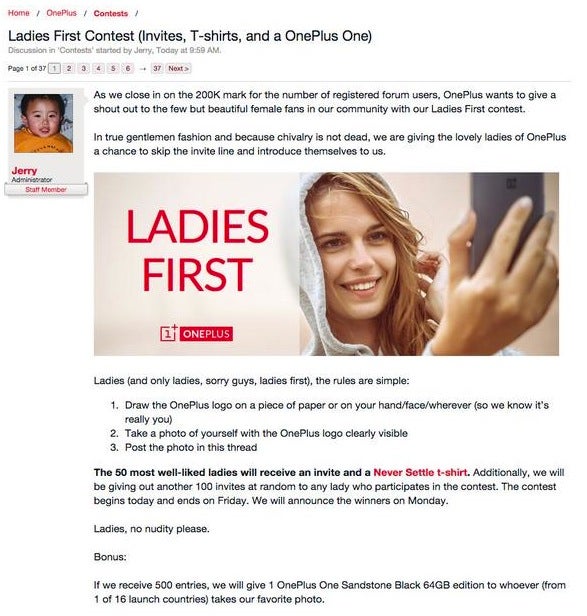 As we close in on the 200k mark for the number of registered forum users, OnePlus wants to give a shout out to the few but beautiful female fans in our community with our Ladies First contest.

In true gentleman fashion and because chivalry is not dead, we are giving the lovely ladies of OnePlus a chance to skip the invite line and introduce themselves to us.

Ladies (and only ladies, sorry guys, ladies first), the rules are simple:

1. Draw the OnePlus logo on a piece of paper or on your hand/face/wherever (so we know it’s really you)
2. Take a photo of yourself with the OnePlus logo clearly visible
3. Post the photo in this thread

The 50 most well-liked ladies will receive an invite and a Never Settle t-shirt. Additionally, we will be giving out another 100 invites at random to any lady who participates in the contest.

(Don’t go looking for the competition thread any more – it’s been deleted. Oh, and that t-shirt? “Never Settle” is OnePlus’s slogan.)

Many of the OnePlus forum’s male members were delighted by this, and a handful of women happily entered photos of themselves complying with the rules (despite the crappiness of the prize – notice it’s only a competition to win the chance to spend money on the phone just like anyone else, not the phone itself). However – and this should come as no shock to anyone reading this – the general tone outside of the OnePlus bubble was one of are you serious, really, what the hell? This response by Wired writer Katie Collins was typical:

This what you were looking for @oneplus? pic.twitter.com/p23lOHBGCe

A not-insignificant number of people have said they’re cancelling their orders, too. Even after pulling the competition the next day, it’s an entirely deserved black eye for OnePlus. I asked them for comment on this, making it clear I was both a journalist and a consumer who’s now unlikely to buy their product, and they gave me the same statement they’ve given everyone else:

OnePlus is thrilled to have a small but growing number of women active in our online community. We want to encourage even more women to get involved with and excited about the amazing things happening in tech right now. The ‘Ladies First’ contest was a very misguided effort by a few isolated employees to do just that, however there is no question the post not only failed to better include our female community but actually perpetuated a stereotype that OnePlus in no way supports or condones. We deeply regret any offense caused by this contest.”

OnePlus has recognised that they screwed up, but it’s still a decent illustration of just how deeply-ingrained structural sexism is in the technology industry. This is a company that’s trying to portray itself as a uniquely different smartphone manufacturer, after all, but it’s clear that what OnePlus is really doing differently is branding, marketing, promotion, design, market strategy, and so on. In other words, it’s only different in how it’s trying to sell us something, not in its culture – something as naive as the Ladies First competition was perhaps inevitable.

Sexism in tech, and especially in the startup sector, is very real, and also structural. Earlier this year, Sam Alton – president of Y Combinator, one of the most prominent “seeds incubators” in the industry, offering startups advice, money and mentoring – blogged about just how ingrained sexism and female underrepresentation is in the companies he works with. Only 19.5 per cent have female founders on the board; only ten per cent of the companies that have gone on to break the $100m value level have female CEOs. Only 24.3 per cent of the startups that apply to Y Combinator have female founders, so even if he wanted more to get involved they aren’t there from the beginning – frankly, “many just don’t feel like they belong in the startup culture”, he says, finding themselves frustrated from everything from openly sexist colleagues to unsconscious minor discriminations that builds up, day by day. (Microaggressions, in other words.)

Stories like that of Whitney Wolfe, a former Tinder employee who briefly dated the app’s co-founder Justin Mateen until she was shunted from the company after what she calls “atrocious sexual discrimination and harassment”, are not isolated incidents – they’re the most extreme manifestation of an industry’s overall poor attitude towards women, both as workers and as targets of advertising. The intentions behind things like OnePlus’ Ladies First competition are irrelevant compared to the practical effect: to mark women out as outsiders to the world of technology, and only allowed into the treehouse as long as the men say it’s OK. That it was a beauty contest, constructed to mark out members of a social community as objects to be pestered by their peers, was the extra sexist icing on the cake.

OnePlus is still a young company, with a small staff, and as such it does have an interesting opportunity here. It wants to disrupt the smartphone industry, maybe it should aim for the culture as much as the economics of it. Perhaps that means paying for better maternity leave before paying for ping-pong tables in the office; maybe that means hiring a dedicated board member whose job it is to ensure that hiring decisions reflect the demographics of the real world, not fraternities. Combatting ingrained biases is difficult, especially when it’s to compensate for your own that you’re unaware of (I can talk, after all – I’m a man with his own, too), but it’s the kind of commitment that means something.

And maybe, by the time their next phone comes around, I’ll choose to reward that effort by changing my mind about asking around for an invite.