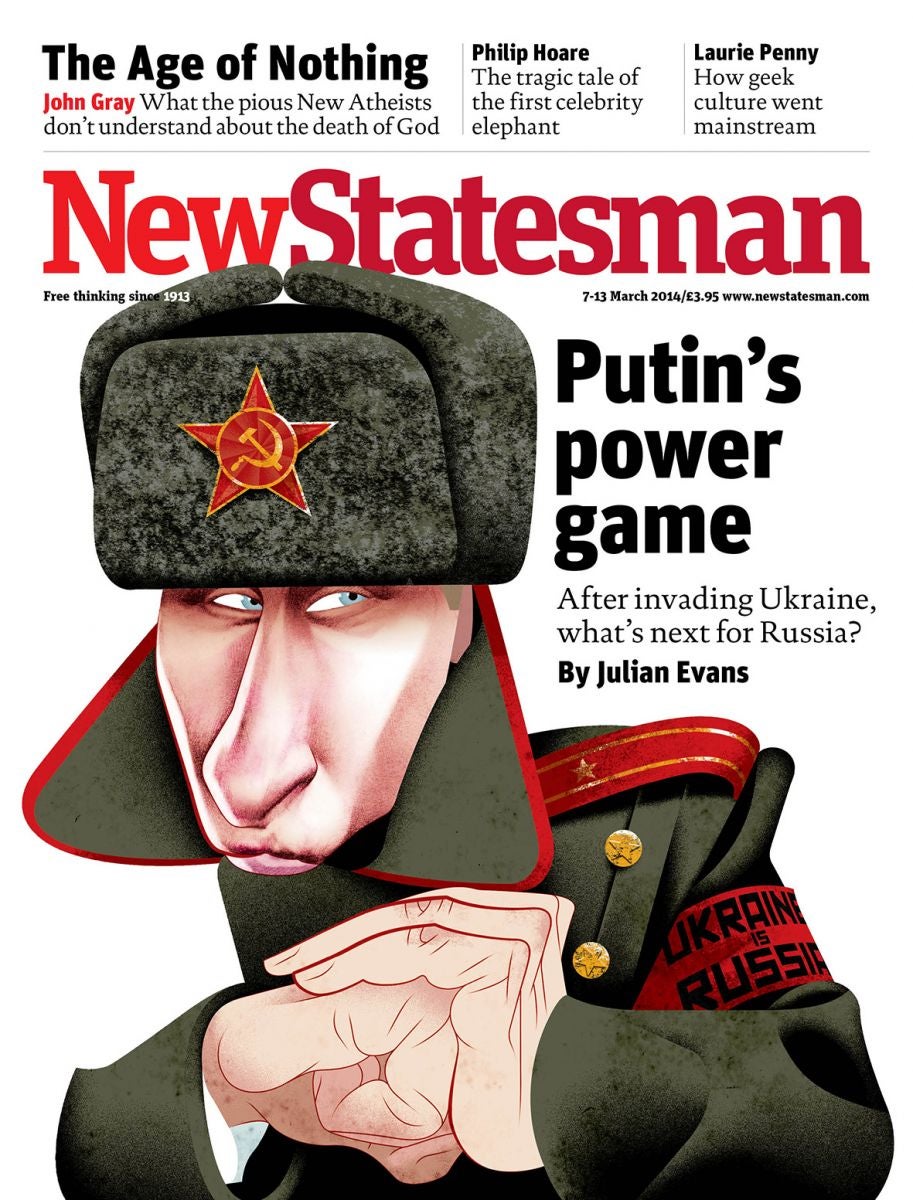 Ukraine: Rebirth of a nation

Nicky Woolf on the politics of US beauty pageants

Jeremy Bowen’s Notebook: I know there’s trouble in the Middle East when I need my kevlar boxers

Sadiq Khan: Why it’s hard to trust the Tories on race

Mark Cousins on the cinema of childhood

John Gray on Nietzsche: the ghost at the atheist feast

In this week’s cover story, the travel writer Julian Evans looks behind the headlines about Ukraine to explore its history as Russia’s “little brother” and its deeply divided and corrupt politics. Can Ukraine finally rise up and free itself?

The revolution in Ukraine and the celebration, grief and apprehension it has inspired mask a fundamental misunderstanding. The country has released itself from the larcenous grip of a bullying dictator and his venal friends – but Ukraine has been a surreally corrupt parliamentary democracy, run by
a lineage of serially corrupt presidents, for 23 years. So why now? . . .

The historical source of the misunderstanding is the assumption that Ukraine was not a nation at all, but always a province, an administrative region, a westerly satrapy of an eastern empire whose ideology, language and aspirations were so uniform that you couldn’t get a papiros paper between Moscow, the boiler room of that ideology, and the country Russia called its “little brother”.

Evans asks what line of action the west should take:

What we must now do in the Europe to whose values the new generation of Ukrainians aspires is, yes, be sympathetic bankers, tactful facilitators, members of a vigorous effort (bilateral, if Putin withdraws, which I don’t think he will) to aid the belated emergence of the independent nation that was created, but in name only, 23 years ago. What we must not do is fail to give strong support, and so embitter Ukraine’s new-found belief in European ideals.

NICKY WOOLF ON THE POLITICS OF BEAUTY PAGEANTS

The NS reporter at large Nicky Woolf explores how young American women are using beauty pageants as springboards for a career in public office.

As she walked out into the glaring lights of the auditorium for the bikini round, Arielle Yuspeh could feel her sash slipping from her shoulder. By the time she reached centre stage, where the contestants slip off their sarongs and reveal their swimwear-clad bodies to the judges, it had come off completely and was tangled somewhere around her waist. With all eyes on her, she froze for a second or so, gave the judges a horrified grimace, then shrugged . . . It was day one of the Miss Louisiana USA pageant at the Heymann Performing Arts Centre in Lafayette.

It is becoming increasingly common for women in America to use beauty pageants as the springboard for a political career. Sarah Palin, the Republican vice-presidential nominee in 2008, blazed this trail (she famously came third in the Miss Alaska pageant in 1984) but many are following in her footsteps. Miss Vermont 2010, Caroline Bright, lost an election for the state senate in 2012 by fewer than 500 votes. Miss Arkansas 1994, Beth Ann Rankin, nearly managed to unseat the then incumbent Democrat, Mike Ross, in Arkansas’s fourth congressional district in 2010. Heather French Henry, Miss America 2000, is being considered to challenge Senator Mitch McConnell for his Kentucky seat, which is thought to be vulnerable to challenge in November . . . pageants, like politics, tap in to a competitiveness that is innate in the American cultural psyche

The NS political editor, Rafael Behr, argues that David Cameron’s petty and parochial view of politics has accelerated the decline of British power:

Putin is betting that a fiscally fragile European Union will not fancy taking on Ukraine as a dysfunctional client state, nor jeopardising its eastern gas supplies to make a point about sovereignty in the Black Sea. He is right. If Russia demands possession of Crimea and strategic dominance of eastern Ukraine, Cameron will acquiesce.

There is nothing new in the exposure of Britain as a mediocrity among powers. Our credentials as a nation that matters – a big economy, a professional army, nuclear weapons, a seat on the UN Security Council – are carried over from the 20th century.

. . . Since the Prime Minister struggles to express guiding principles in a domestic agenda that consumes most of his time, it seems unlikely he will articulate a coherent sense of strategic purpose in foreign affairs, to which he pays only occasional attention. He may talk about global challenges but his record is of ducking difficult issues and keeping politics parochial.

In a notebook for the NS, the BBC’s Middle East editor, Jeremy Bowen, describes how he can track turbulence in the region through the contents of his suitcase:

I always have a big flight case packed in my garage. It contains a flak jacket, a ballistic helmet, vivid yellow and black Kevlar-woven “blast boxers”, assorted dressings and first-aid kits, along with a riot helmet, a gas mask and shatterproof protective glasses. The case is my personal index of Middle Eastern trouble. I needed it all only rarely before 2011, usually because of a flare-up between Israel and the Palestinians or Lebanese. Now I take the case to most places.

As the international news machine turns its attention to Ukraine, Bowen detects more than a hint of hypocrisy in the US response:

I watched a live broadcast of the American secretary of state, John Kerry, in Ukraine. The way he mocked the Russians at his news conference sounded as if he was trying to win a debate, not help settle a crisis. I think Russia should not send its troops on to the territory of its neighbours. However, it is hard to listen to an American official talking about sovereign territory, international law and invasions without thinking about what happened in Iraq in 2003.

SADIQ KHAN: WHY IT’S HARD TO TRUST THE TORIES ON RACE

The shadow justice secretary, Sadiq Khan, is not convinced by Conservative attempts to woo black and ethnic-minority voters:

As someone who grew up as an Asian boy in Thatcher’s Britain, I find the Tories’ current campaign to woo black and ethnic-minority voters hard to believe. Others of my age and background may find it almost funny, too.

My earliest memories of the Conservatives are that they were never on my side when I was subjected to racism, whether in the football stands or by the police. I won’t forget how they ignored Stephen Lawrence’s family after his murder and, two decades on, it’s difficult to shake those suspicions. I welcome anything that offers black, Asian and minority ethnic (BAME) voters better political representation but it doesn’t take long to notice that the Tory party is little closer to looking like the country it represents.

LINES OF DISSENT: MEHDI HASAN ON THE INEQUALITY MOMENT

In his New Statesman column, Mehdi Hasan argues that inequality has finally emerged as the most critical issue in British politics – and says this is a moment that Ed Miliband is poised to seize:

The leader of the Labour Party believes that “tackling inequality is the new centre ground of politics”, to quote from his Hugo Young Lecture on 10 February. His closest adviser, the academic and peer Stewart Wood, leads the charge on inequality inside Miliband’s office. “Ed’s concern to stop Britain continuing down the path of growing inequality, to the detriment of social justice and our economic health, will be central to any government that he leads,” Wood tells me.

But aren’t all Labour leaders – with the exception of Blair and maybe  Gordon Brown – concerned with the gap between rich and poor? Perhaps. However, the difference is that inequality is no longer a niche issue.

This is the Inequality Moment. Yet the Tories, with their historic aversion to any mention of the “I” word, will struggle to answer the question: “Whose recovery is this?” Miliband’s calculation is that voters won’t.

Following in the footsteps of Richard Dawkins, Caitlin Moran and many others, Maureen Lipman is the latest contributor to our “What Makes Us Human?” series, published in partnership with BBC Radio 2’s Jeremy Vine show.

Lipman considers empathy and an awareness of our own mortality as defining human characteristics, but she suggests it is our drive to create, to leave our mark, that most sets us apart:

One doesn’t need to be a creative genius, of course, to create. The letters written from a trench, a boarding school or a far-flung land, the crocheted baby bonnet, the antimacassar destined to sit invisibly beneath an aspidistra all its life – all these sprang from the same spark of creativity . . . There is such a strong need within us to say: I made this. I was here. This is my mark. Think of me.

Science: Michael Brooks on the mysterious force of gravity