It’s all resulted in me having very little idea what I should be doing with them on an hourly basis. Even now, they’re just sitting here. Two awkward half melons waiting to know what the latest thing is they’ve done wrong and what they should be doing to fix it to finally make everyone else happy.

But look! It’s okay. It turns out that they can smell better. As the Telegraph reported today, I can now worry about whether my breasts are producing the sweat their existence means they’re guaranteed to make. And you can too! There’s no discrimination here. Everyone with breasts can hate themselves.  Deodorant for breasts – or “swoobs” (sweat + boobs) – is now here for us. And to think, all this time I was only focused on whether my vagina was offensive to the wider public.

Thank the Lord for the ongoing union between capitalism and sexism because there are some days I’ve been waking up and I haven’t been feeling bad about myself. “Women can now rest easy,” promises Fresh Body as they describe the way their product can replace my “dreaded boob sweat. . . with smiles.” Which is impressive because they’ve managed to stop me worrying about something I didn’t even know I was worrying about.  Or start me worrying, as the case may be. These people can simultaneously tell me what’s wrong with me and sell me a solution for it! That’s time efficient, as much as anything.

I find that the shame cycle of having a female body takes a good forty-five minutes to get my lady head around each morning. I don’t know if there’s been any research on the causal link between breasts and gender inequality but I would like to suggest they are entirely responsible for the pay gap. If I spent less time thinking about my breasts, I could probably end structural sexism by lunchtime. It’s just bloody difficult, what with having to make sure they’re sexually appealing but not slutty, available for men and babies. . . and now producing the right odor, as well. Having a woman’s body under patriarchy is a job in itself; just rather than making you richer and more fulfilled, it costs you money and makes you feel terrible about every part of yourself.

Like all the best sexism, “swoob” products dress themselves up as your best friend. Whispering fabricated failings into your ear while promising to help you find the solution. It’s the January diet that offers to stop you feeling guilty for having eaten in December. It’s the woman’s magazine that points at women’s “saggy” breasts and “fat” stomachs and tells you it’s doing it to make you feel better.

Your body smells repugnant but if you buy enough stuff, you’ll soon be blissfully wandering through the streets in your bra: 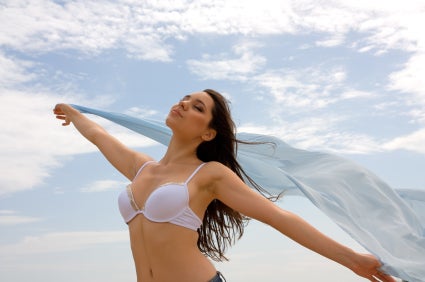 She looks so happy, doesn’t she? Shaved, sprayed, bounced and ready. It turns out it only takes constant doses of shame to be freed from the shame of being a woman.