What does it mean to be a British woman in a comedy show? Usually, there are limited available roles: they’re twee and harmless, they’re useless singletons pursued by pushy mothers, or they’re equally useless drunkards pursued by insufferably sensible daughters. See: The Vicar of Dibley, Miranda, and Absolutely Fabulous. With perhaps the exception of Ab Fab, these female-centred programmes have a gentle conservatism to them – boundary-pushing they are not. And that’s fine; comedy need not always be achingly edgy. But nonetheless, it’s a sad fact that, as far as British female comedy is concerned, there’s something missing. Something darker, grittier and perhaps even a little bit sicker. Why has America, usually a purveyor of bland and inoffensive goods, taken the driver’s seat in this respect? Where exactly is the UK’s answer to Girls? Despite what we imagine to be budding scriptwriters and commissioners’ efforts, as yet no one has come up with the goods. Despite women being just as capable of twisted humour as men – maybe even more so – female-centred black comedies are few and far between. 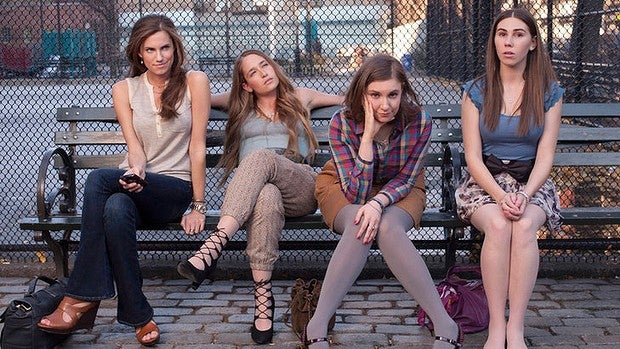 The cast of HBO’s Girls.

Take Drifters, which was hailed by some journalists as the British equivalent of Dunham’s efforts, but resembles it only insofar as it’s blatant nicking of the title credits. Created by Jessica Knappett, of The Inbetweeners film, it’s a sitcom about three women living in Leeds post-university, yet it fails somehow to pull it off. Much like The Inbetweeners, there are gross-out elements to it, but it falls short because it essentially lacks authenticity. It doesn’t feel honest. Women don’t speak like this, and they don’t act like this, and Knappett, who also plays the protagonist, Meg, frequently resorts to Miranda Hart-esque bumbling self-deprecation. Opportunities for black humour, such as the girls gatecrashing a funeral or Bunny, Meg’s cousin, finding out that her boyfriend was also her primary school teacher who had, essentially, groomed her as a child (neither of which were particularly imaginative storylines) were missed in favour of cheap, anodyne laughs. Not since the BBC’s Pulling have we seen the single-women-in-a-houseshare trope done with any real wit and conviction. Like Drifters, it was a dirty laugh of a programme, but unlike it, it has a slightly dark underbelly, as evidenced when one of the characters dates a reformed flasher.

What makes Girls different from its British counterparts is the fact that it often deals in uncomfortable subject matter. Abortion, drug addiction, family breakdown and realistic break-ups feature in all their dysfunctional glory without a slapstick tumble in sight. Additionally, the thoroughly dislikeable Hannah Hovarth and her equally flawed friends exhibit a number of abhorrent character traits: Hannah is spoiled, she’s narcissistic, she’s self-obsessed and entitled, she steals the money that her mother left for the housekeeper at a hotel and leaves without an ounce of visible guilt and lectures one of her boyfriends, who is black, on racial politics. Marnie does a cringeworthy rendition of Kanye West’s “Stronger” at a party, not in a “woopsy, I had too many tequilas and I’ll laugh about it while on my best friend’s floor the next day” way, but in a sad and desperate way that leads to sex with her embarrassed-for-her ex-boyfriend in his office. Shoshanna humorously struggles to admit that she’s a virgin to a boy she wants to sleep with, and is rejected for her honesty. Jessa goes to rehab and uses her razor-sharp tongue to wittily but devastatingly assassinate the personalities of all of her fellow patients. It’s funny, but it’s also sociopathic. 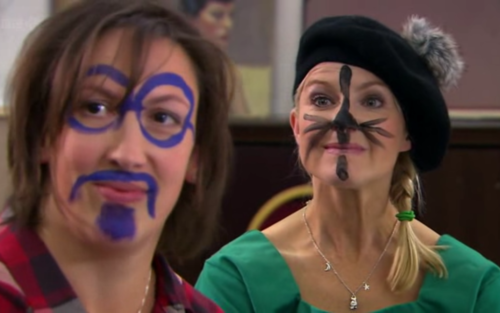 Women in British comedies are silly or misguided, but with redeeming qualities. They are rarely ever sinister, rarely ever face serious dilemmas, and their morals are rarely placed in question. Jo Brand’s criminally underrated Getting On deserves an honourable mention here – the scene in which the nurses devour a recently deceased geriatric patient’s chocolate birthday cake exemplifies the gallows humour that is lacking so much elsewhere. The only other recent example of a female comedy character exhibiting some nuance and poignancy would be Vod from Fresh Meat, a comedy written by the men behind Peep Show. The way the last series portrayed her relationship with her useless, drunken single mum was searingly honest and darkly funny, but do question why women aren’t writing such characters, or aren’t being commissioned to do so.

Lots of us are surrounded by hilarious women on a day-to-day basis, and Twitter opens us up to the edgy humour of many, many more, yet this rarely translates to the screen. While we have high hopes for Caitlin Moran’s Raised by Wolves, a comedy about a teenage girl growing up on a council estate in Wolverhampton that has just been commissioned after a pilot episode (working class experience is also criminally underrepresented), comedy remains a fairly disappointing place in terms of diversity. This applies not just to gender and class but also to race. It’s a fairly bleak state of affairs, but more than being bleak, it’s incredibly, unutterably boring. Where are our Withnails and I’s, our Marks and our Jezzes, our Mighty Booshes? In a televisual environment where female comedians are edited or drowned out on panel shows, we’re crying out for more voices. We want out heroines drunk, eccentric and morally flawed, rather than posh and self-deprecating. And we suspect that their absence is not for want of them being written, either.