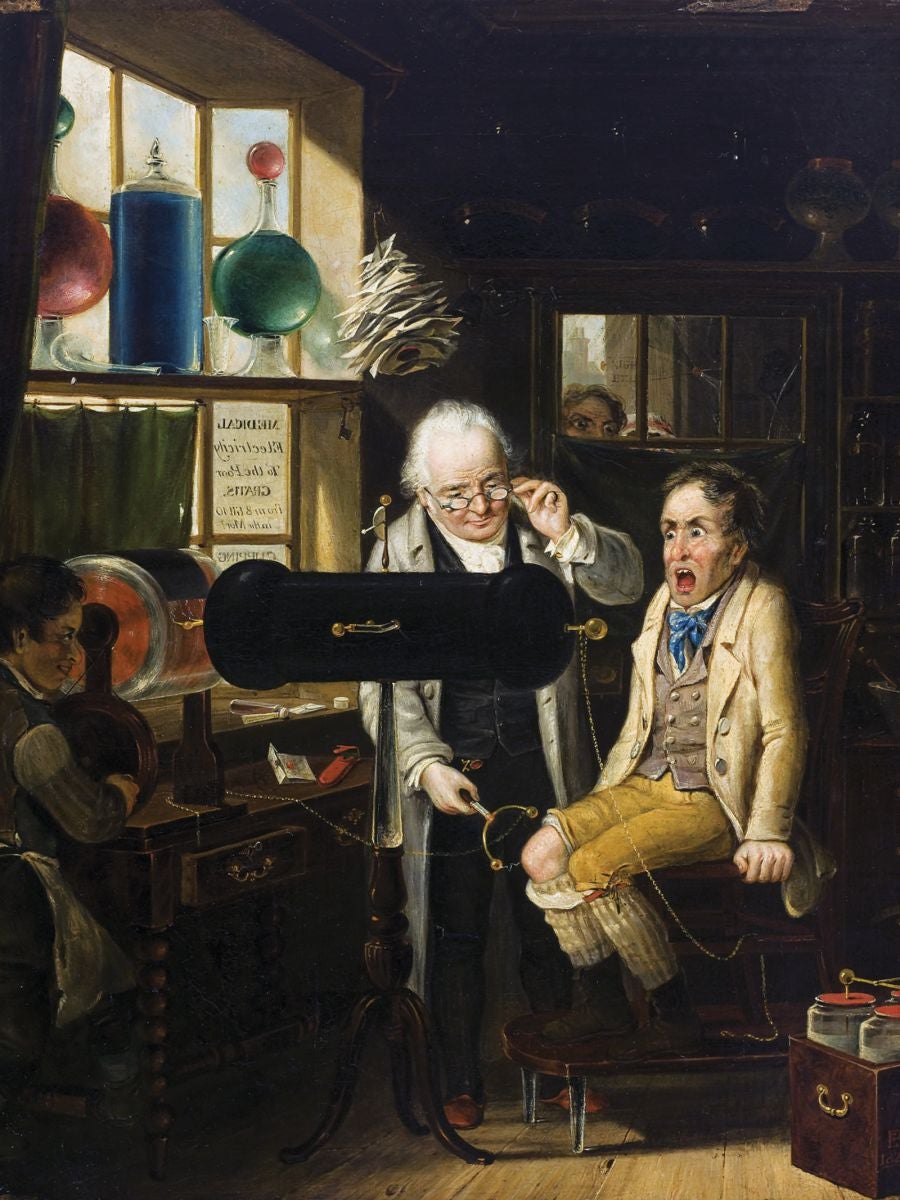 It looks more like an art installation than the remains of a 400-year-old experiment: a life-size image of a man rendered in dark, angry scrawls on a wooden panel. It is, in fact, a human nervous system, painstakingly removed from a corpse by Italian medical students and then varnished on to the dissecting table. Scientists in the 17th century believed that human beings were animated by the “animal spirit” that flowed from the brain down the nerves.

The display is part of the “Mind Maps” exhibition at the Science Museum in London, which explores how people have tried to gain a better understanding of their minds.

For such an ambitious project, the exhibition is unexpectedly compact: the material is organised around four brief periods, each one marking a significant shift in psychology. We start in 1790-1810, when a distinguished cast of historical figures was brought together through attempts to cure “nervous disorders”. There’s a glass harmonica, designed by the American founding father Benjamin Franklin, which was used in séances by Dr Franz Anton Mesmer, from whom we derive the verb “to mesmerise”. So impressed was Mozart by Mesmer’s instrument, he composed music for it. His eerie melodies induced convulsions in Mesmer’s patients.

UK corporate leaders group: we are trailing in the global race for green growth

Around the same time, medics were exploring the effect that electricity could have on the nerves. John Wesley, one of the founders of the Methodist Church, was an early proponent of the use of small electric shocks to cure ailments ranging from headaches to “insanity”. The Italian scientist Luigi Galvani was fascinated by this link and spent much of his life applying electric shocks to dead frogs to explore how their legs moved. In 1803 Galvani applied electricity to a human cadaver in London to reanimate its limbs – a gruesome experiment said to have inspired Mary Shelley’s novel Frankenstein.

Jump forward to the turn of the 20th century and nervous disorders were a common preoccupation, seen as a product of the stresses of modern life. What we now call depression was then “nerve weakness”, to be treated with amulets, poisonous nerve tonics or electric currents. It took a former nerve doctor, Sigmund Freud, to argue that mental illness might be the result of unresolved emotions.

By the 1930s modern technologies allowed scientists to probe deeper into the brain. We learned how to measure brainwaves; a discovery that ushered in one of the most troubling periods of mental health care. The 1930s marked the first use of some of our most invasive treatments for mental illness, including electroconvulsive therapy and lobotomies, carried out with little understanding of how or why they might work.

So how far have we come? “Mind Maps” wisely leaves this question unanswered. Advanced scanning techniques have allowed us an ever more detailed understanding of the brain’s physical structure but there’s also renewed interest in low-tech solutions. Treatments such as cognitive behavioural therapy demonstrate a new emphasis on empowering patients to take charge of their own recovery. Meanwhile, the “communicube” and the “communiwell” – stones, buttons and tokens placed on a structure resembling a cake stand, used to help people describe and position the voices they hear in their head – don’t look so very different from the amulets our forebears might have carried to ward off mental illness.

Perhaps that’s fitting, because, for all our scientific sophistication, elements of human consciousness still feel as remote and underexplored as the surface of Mars.