Outnumbered is a cutesy semi-improvised BBC sitcom about a family with three kids. The dad (Hugh Dennis) is a teacher; the mum (Claire Skinner) is a part time PA. Exactly how much they earn is difficult to ascertain, because: (a) they’re fictional and (b) it’s private, but the Brockmans frequently worry about money.

I mention all this because, despite their whinging, they’re almost certainly millionaires.

Look at their house. It’s got three levels, it’s at least four bedrooms, and best of all, it’s in Chiswick, one of the few bits of London where the city genuinely looks like a Richard Curtis movie. I’m not a surveyor, and valuing a fictitious house isn’t easy, but property websites suggest you’re not going to get anything even remotely comparable for less than £1.1 million. Remember that silly sub-plot in which Hugh Dennis is seriously considering taking the kids out of school to go travelling for a year? That makes a lot more sense once you realise this family is absolutely bloody loaded.

Horsing around in their million-plus home: BBC’s Outnumbered sitcom

These days, those people could not afford to buy that house. Not even close. Taking a generous assessment of the household finances, their home is worth 12 times the family income. Even in 2006 no one was lending that.

It’s easy, with our London-centric media, to get sucked into thinking that British house prices are in the middle of another bubble. That, though, isn’t quite true: by international standards, in fact, our housing isn’t that expensive. Research from Bank of America Merrill Lynch suggests that British homes cost an average of around four times household income. In Australia the multiple is five and a half; in Germany, it’s six.

London, though, is a different case entirely. The average selling price for a home in the capital is somewhere around the £400,000 mark, while the average household income is something like £50,000. In other words, even taking into account that Londoners earn more, their house prices are twice as expensive. Read across from this to pop culture and you get all sorts of bizarre anomalies.

Looking at property websites, you can get a fair sense of how much the homes from TV would cost you now. Do so and you’ll find the dingy Croydon flat Mark and Jez share in Peep Show is relatively affordable, at somewhere around the £175,000 mark (lucky, really, since only one of them has a job). The one from Spaced, though, is in a Victorian block in desirable Tufnell Park, placing it way out of reach at nearly half a million.

Tom and Barbara’s place in The Good Life was last on the market for £570,000, but that was back in 2001 before prices started to go nuts. Since then they’ve risen nearly 150%, so you’d be looking at well over a million now. (Try being self sufficient after you’ve bought that.) Even the Trotters’ Peckham council flat, which they almost bought under right-to-buy, would be likely to set you back £200,000 in change (it’s only as cheap as it is because mortgage lenders tend not to like tower blocks). It’s an exaggeration to say that this time next year they’ll be millionaires, but in the long-term it’s not exactly implausible.

Perhaps nothing highlights quite how ridiculous the market’s got, though, as Eastenders. The exact location of the fictitious Walford is kept deliberately vague, but on the tube map it’s somewhere near Bow, where you won’t find a three-bed Victorian house for less than £700,000. Albert Square itself is based on Fassett Square, a couple of miles west in Dalston, where you’re talking closer to £1 million. Think about that. The houses on show in the ultimate exercise in televised miserablism are conceivably worth a million pounds. 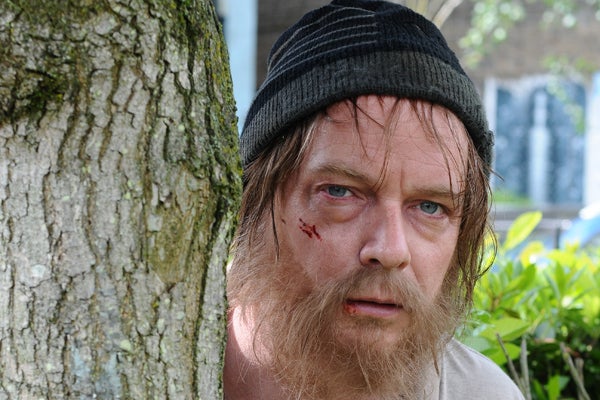 Ian Beale shouldn’t be the only one struggling to find a safe place to sleep on Albert Square.

Very few of the people portrayed in these shows would today have the faintest hope of buying the homes that they live in. They might own them already; they couldn’t buy them now. A realistic version of Eastenders would see the square’s entire population sell up and move to Essex, to be replaced by a bunch of hedge fund managers and hipsters living ten to a house; the family sitcoms of the 2020s will all be set in Northamptonshire (“North Londonshire”), and feature parents who bitch constantly about the cost of train travel and the knackering nature of a two-hour commute.

What all the means is that the real London is going to look less and less like the one we see on television. Unless something radical changes, even the drabbest bits of the city will be taken over by bourgeois tossers like me, while anywhere even vaguely pleasant will become the domain of the super–rich. I can’t help but think that’s a bad thing.