I never really meant to start a dating blog. But, I went on my first online date, and it was a catastrophe. How bad can it be, I hear you ask? Well, it led to this Facebook chat with a friend: 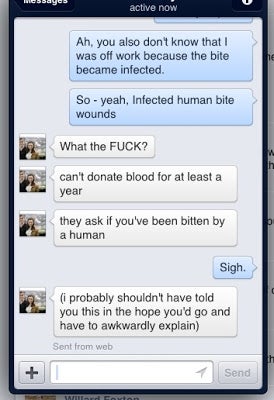 She seemed pretty normal at first. Pretty, worked in publishing. Sadly a little dull in person. OR SO IT SEEMED.

We were in a Vietnamese restaurant and I’m terrible with chopsticks, so she was touching me a lot, helping out. Quite nice, quite pleasant. Anyway, dessert arrives, I am struggling with some piece of sugary slime, she reaches over, takes my hand… Takes the chopsticks out of my hand, starts sucking my fingers. WEIRD. But I didn’t stop her. I should have.

She then bit my fingers, really hard! I screamed at the top of my voice (default setting: loud) “WHAT THE FUCK DO YOU THINK YOU ARE DOING?!”, causing a scene in the restaurant. She tells me she thought I’d like it – then bursts into tears. I wrap my bleeding hand in a makeshift bandage I fashioned from a napkin, walk to the bar & say “I’d like to pay & leave, please”.

They then can’t get signal on card machine, so paying takes ten minutes. While she sat sobbing in the background. It was excruciating. I probably could have handled it better; I do feel guilty about it, but she literally bit my fingers until she drew blood. I honestly thought she might bite them off.

It was only a week later, visiting my doctor suffering from headaches and nausea, my doctor (a lovely old posh scottish lady) asked “Hmm, have you been bitten by any animals, Willard?”, and it turned out the bite wound was infected(medic friends tell me this is pretty common, as the normal human mouth is a nasty place). I actually felt quite sorry for the girl in question. I’ve even found the article in a glossy mag that recommends a woman “Press a fork into different parts of his body at dinner—his butt cheeks, his pecs, his thighs. If you really like him, bite him in the restaurant”.

While this was clearly one of the worse dates ever, it wasn’t the worst I’ve ever been on, or ever heard of.

It was only after this experience – and hearing other friend’s bad online dating experiences – that I decided to do a dating blog. My favourite friend’s dating experience was a girl who told me she went on an internet date with a guy who was genuinely dreadful – a real “ahem, you had three rolls, I had none, so a I think a 35/65 split is more equitable on the bill” type. Date is over in about an hour, she heads home, thinking, what a douche. He texts her, saying “I realise the date went badly, but was wondering if you were still interested in sex. I have a massive penis. Jim. XX”. And attached, is a picture of said massive penis. In fairness to him (she’s shown it to me), it was huge – like two beer cans welded together.

So, this online dating business is clearly a wasteland populated by freaks, huge-cocked mutants and blood-crazed biting cannibals. As one of the few (relatively) normal survivors out there, it seemed like a good idea to chronicle my wander through the wasteland – leave behind a survival guide. For example, I’ve since discovered that the website I met the biter on (OK Cupid) is notorious for being full of what one online dating veteran described to be as a “Legion of Polyamorous Kinksters”, so it was probably a bad choice for me.

Of course, looking around, I wondered how could I make the dating blog different from every other dating blog out there. I mean, how could I guarantee every date would be bad enough to blog amusingly? Then I hit upon an idea; why not try to do a multitude of different dating sites?

So, here’s the plan – 28 dates. 28 different dating sites. A mix of the most common sites, and some of the crazy ones. So. Let’s see how this goes.

And with that, Willard stepped back out into the wasteland.

This post originally appeared at 28 Dates Later. Stay tuned as we catch you up with all Willard’s disastrous dates so far over the next week.