It can take less than a second for someone to form a firm impression of you, according to recent studies which found that a quick assessment of facial features, clothing, demeanour and situation can stabilise into a long-term judgement on someone’s personality. One area in which this makes a huge difference is recruitment. So, how can a prospective employer make better judgements, and how can an applicant get a fair appraisal, in the awkward ritual of the formal job interview?

Join is a London-based startup that aims to change this, by introducing groups of graduate job candidates to prospective employers over a meal. Ricardo Tannus, the company’s founder, explains – over dinner at Senor Ceviche, a Peruvian restaurant in Fitzrovia that is one of several used by Join for its introductions – that companies “sign up with us via our website, and tell us what kind of role they’re recruiting for, and about their organisation’s culture and values,” while candidates “also sign up, and we interview them, draw up a profile, and later down the line match suitable candidates with the companies we feel they are most aligned to. Then, when the meal happens, you have a group of candidates meeting a company that they don’t know anything about, and a company that is likewise in the dark.” He sips his wine. “It’s a bit like a blind date.”

But unlike mobile dating apps such as Tinder and Bumble, which encourage matches to talk a little first before meeting, Join insists on mystery right until the very last moment. Tannus, 26, says: “We decide on the match. That’s our role in this. We keep the two parties apart until the meal – we turn down any requests for more information or a sneak peek at a CV – because we want to eliminate the risk of recruitment biases.”

What are they? “The problem with a lot of recruitment’s status quo,” Tannus continues, “is that it’s too hung up on, let’s face it, pretty arbitrary trends in HR. When companies recruit for jobs, they have a preconception of the role, and they set out requirements like needing to have a certain amount of experience, a degree in a certain subject, and so on. What they end up with, then, is a lot of similar looking, similar age, similar background people. I always found the idea that a strong candidate who was suited for a role might miss out on the chance to get it because they had just two years of experience instead of three, for example, was very odd.” Diversity, Tannus says, is at the core of what Join does. “We make a point, when we are deciding on the candidates to take to a meal, of making sure that we have a good and interesting mix of people.”

The idea for Join can trace its genesis to Tannus’s own time as a student, first as an undergraduate computer engineer at the University of São Paulo in his native Brazil, and then during his master’s degree at London Business School. “In Brazil, the degree I was doing was what they call a ‘cooperative’ course, which meant that I had to do multiple placements as part of it. Internships counted towards the grade. I was ‘forced’, you could say, to apply to lots of jobs, and I did placements across different sectors, including business, finance, computer programming and HR.”

After a nine-month stint at “Brazil’s answer to Hired.co.uk”, Revelo, Tannus moved to London in 2016. “During my postgrad, I got the idea that networking was a pretty understated part of the job application process. What you get with traditional recruitment is the well-worn cycle of uploading your CV, uploading your whole life even, answering all these competency questions… it’s pretty soulless, to be honest. And there is a terrible culture of people being rejected for jobs, with just standardised email responses. The lack of feedback is hard to take.”

For Tannus, traditional approaches to recruitment “can be really inefficient”. He says: “There’s an irony, I suppose. Companies will advertise for a job and insist on certain hard skills – i.e. the ability to be able to do the functionality of the job – but nowhere in the application process is there an insight into a candidate’s soft skills, or their capacity to fit in with their future colleagues, or with the company’s ethos. It’s quite common to see companies lose graduate trainees after just one year of employment. Retention is a massive thing for companies and so it’s really important to get the hiring process right in the first place, rather than losing someone so quickly into their time with the company. That’s why, unless the role is specifically related to the HR department, we always insist on a company sending a representative from the team that the role is actually going to be based in, so the candidates are meeting one of their actual prospective colleagues.”

Since 2016, Join has arranged close to 500 meals and currently works with 35 companies, including Amazon, AB InBev and Bloomberg, and has a database comprising “thousands” of final-year or graduate candidates, “mainly from London universities”. How many hires have been made off the back of these meals? “It’d be hard to say, as what the meal does is offer an introduction. If a company representative wants to meet one of the candidates again, after the meal, then they’d still need to go through their own formal interview process or whatever they have in place. We do track the number of hires made, but can’t really share that data because of the arrangements that we have with the companies.”

Why should companies pay money – Join charges “varying amounts, usually a couple of hundred pounds per candidate, depending on the seniority of the role” – to meet people that could plausibly just apply for those jobs anyway? While candidates don’t pay to be registered on the database, they do pay a “subsidised fee of around £30” if they are selected to attend a meal at one of the restaurants that Join has “partnership” arrangements with. For no guarantee of a job, or even a job interview, this cost could be a sting for those looking for work and with very little disposable income. But Tannus is bullish. The amount of meals Join has already organised and the number of companies who have used Join multiple times, he says, shows that the idea has achieved “proof of concept”.

Still, eating out can be a social minefield. How does Join legislate for potential spillages, poor table manners, dietary requirements, or the loudest candidate dominating the conversation? Tannus says: “Well of course we make sure we go to places with a range of options, including vegetarian and vegan options. We don’t do complicated cuisine, it’s all pretty basic. I can’t guarantee that no one will spill anything, but we are trusting people to be adults.” 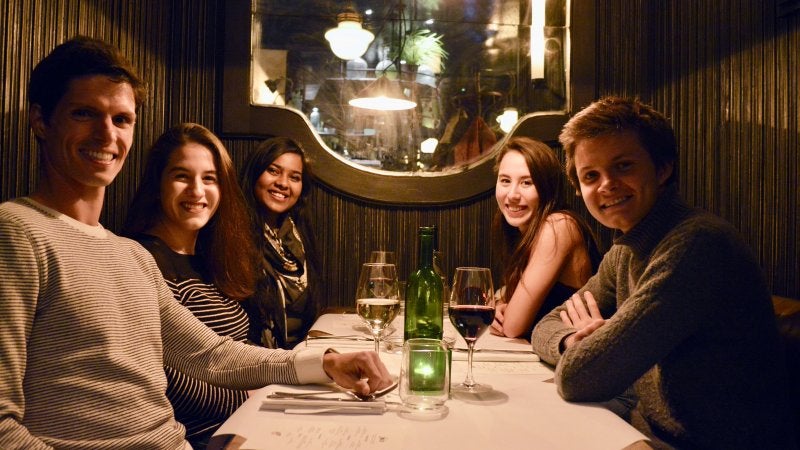 Does the informality of the situation – Join prides itself on making the meals “less stressful than a typical job interview” – increase the risk of unprofessionalism? “How people behave,” Tannus maintains, “is their responsibility. But it’s not in anyone’s interest to be unprofessional. What the meals do is give people an insight into the culture and values of an organisation or a candidate.”

Nevertheless, it is evident that Tannus is sincere in his desire to “change the culture of recruitment”. Unlike traditional recruiters, Join doesn’t operate on a commission basis. “The aim is to have a more holistic approach to HR,” he says. “In traditional recruitment, headhunters may push candidates to take jobs because they are motivated by commission, without really appreciating whether that person is actually aligned to the company’s values and vice versa.” According to recruitment trade site Agency Central, a typical headhunter in the United Kingdom charges between 15 and 20 per cent of the salary of the job being recruited for, which would, in theory, make small Join groups a cheaper option of sourcing candidates.

The blind element of the meal, Tannus says, also helps companies to get an introduction to candidates they may not have been exposed to otherwise, and similarly introduces candidates to companies they may not have thought to apply to. “We actively try to diversify our groups [who attend the meals]. We are trying to deconstruct a lot of the stereotypes associated with certain jobs and industries. I think a lot of students have an idea of what they want to do, and where they want to work, but too often they can get tunnel vision about that. Careers fairs, in my experience, can be pretty superficial, and not have enough detail on an organisation. Join helps to show students and graduates a lot of different sectors and industries that they may not have considered before, and it’s the same for a company being shown types of people that don’t usually apply to them.”

Why should companies trust Join to evaluate candidates’ compatibility to their culture and values? Why wouldn’t they do this themselves? “Often,” Tannus says, “companies literally don’t have the time to assess all applicants – this is why recruiters exist. If the company is assessing candidates, they can fall into the trap of recruitment biases, like we said. We are committed to delivering candidates from different backgrounds, from different universities and courses.” But what qualifies Join and its staff to make those judgments?  “Some of the team,” Tannus explains, “do have backgrounds in HR, but more than that, we are working alongside London Business School’s organisational behaviour specialists to map out what the company’s culture is all about. Companies’ HR departments, I’ve found, can be so overwhelmed, they can end up as gatekeepers, and they are bogged down by checklists for the sake of checklists.”

While meals, ultimately, are unlikely to replace job sites any time soon, it seems that Join does raise important questions about the value of diversity and soft skills in the recruitment process. The company, by Tannus’s own admission, has a “nascent” presence on social media and relies on “word of mouth” for much of its business, but with the pedigree of some of its clients considered, it’s clear that the approach is appealing to some. And a meal, in theory, must be more enjoyable than filling out a form.