On 27 May, on Twitter, a lot of people weren’t happy. For the first time in its history, the social media platform inserted fact-checking information under some of President Donald Trump’s tweets.

Trump had tweeted the day before that all postal ballots (“Mail-Ins”) sent out to people in California would be “fraudulent”. The following day Twitter inserted a tab underneath these assertions to point people towards information showing that the tweets were, in fact, untrue. 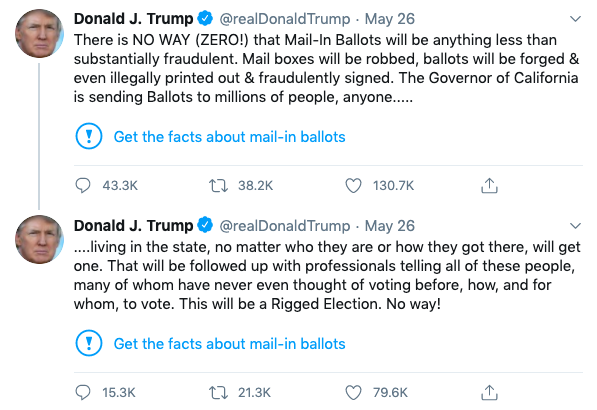 There were three negative reactions. Firstly, some people (including Donald Trump) believed that Twitter was wrong and that actually, what Trump had said was completely true (to clarify: it wasn’t).

And finally, the free speech wave came along, saying that even if what the President of the United States said was incorrect, with a blue checkmark next to his name to a global audience, that social media platforms shouldn’t be acting as fact-checkers and cherry-picking what to fact-check and what not to.

But alongside the criticism came praise for Twitter and its CEO Jack Dorsey. It was immediately heralded for being the first social media giant to stand up to Trump, and was particularly praised for doing so as Trump clearly favours Twitter as a platform. Even with Trump implying repercussions for putting fact-checks on his tweets, the alerts are still up.

Often when a social media platform makes an intervention, there will be applause, even if the action is below standard. We should be wary of knee-jerk positive reactions: in this case, praising Twitter, which has done practically nothing and also shown little inclination to do more.

Before and after posting false information about postal ballots, Trump was pushing a variety of conspiracy theories. In the days and weeks preceding his Mail-In tweets, he had started the rumour he called Obamagate: a vague allusion to some sort of cover-up by Barack Obama relating to the Russia investigation that is hard to explain because Trump himself hasn’t explained it.

During that same time, Trump embroiled himself in another conspiracy theory, suggesting MSNBC news anchor and ex-congressman Joe Scarborough was somehow involved in the death of one of his congressional aides, Lori Klausutis, in 2001. Since Tuesday, Trump has continued to push both of these conspiracy theories with no intervention from Twitter. Klausutis’s widower asked Jack Dorsey to remove Trump’s tweets – Twitter has publicly declined.

It’s hard to argue against Twitter putting fact-checks on false information, but this isn’t where the problem lies. Beyond Trump’s tweets, the platform is riddled with antisemitic conspiracy theories, debunked claims about 5G and objectively false information relating to elections all over the world; the blatant misinformation touted by politicians is countless.

In order for social media fact-checking to be effective, it has to be all-encompassing. At the very least, it should be all-encompassing on the one account they’re choosing to fact-check. Twitter has fact-checked one thread of tweets, a thread bookended by tweets containing conspiracy theories. It is the very definition of performative. Heaping praise merely incentivises doing so little.