Every day, in the early afternoon, the UK government announces a grim figure: the number of new deaths connected with Covid-19. And every day epidemiologists, journalists and assorted data wranglers add that number to their spreadsheets and use it to try to plot the extent of the disease, and its likely course.

The figure is not meaningless – far from it. But neither does it accurately tell us what we might expect: the number of people who have died on a particular day because of the coronavirus.

So what does the figure show? Broadly, the number of people who have died in hospital having tested positive for Covid-19 in a 24-hour period. Which 24-hour period? In England at least, the 24 hours up to 5pm the previous day.

There are two problems – or sets of problems – here. One involves lag. Just because a patient’s death is reported on a particular day, this doesn’t mean that it happened on that day. Reports are counted only once.

The second involves gaps. The government’s daily count doesn’t include people who died after contracting Covid-19 but either weren’t in hospital when they died, or were never formally tested. A lot of people who are dying are frail, elderly or very seriously ill, and may have died without being taken to hospital.

How much of a problem is undercounting? The Office for National Statistics (ONS) publishes weekly figures on recorded deaths. Over the past two weeks, it has included Covid-19 in this analysis. Unlike the daily figures, the ONS’s figures reflect the number of times Covid-19 is mentioned on a death certificate. Therefore its figures include people who died without going to hospital, and those who died untested (doctors can mention Covid-19 on death certificates based on clinical symptoms alone).

Fortunately, death certificates also contain the date the death took place. So yesterday the ONS published another set of figures: the number of Covid-19 related deaths, counted by the day those deaths took place, compared to the daily death figures announced by the government that day.

The results – for England and Wales only – suggests the government’s daily death totals are substantially lower than the actual number of Covid-19-related deaths on any given day: 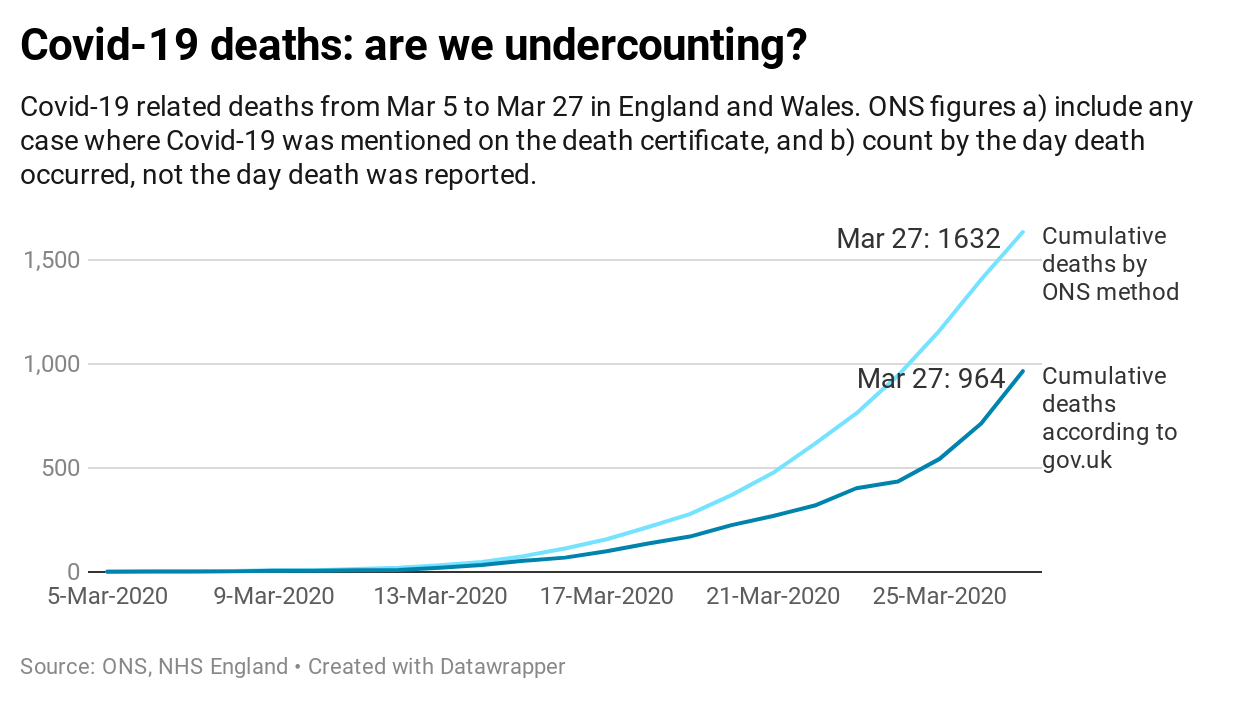 By 27 March, according to the ONS methodology, 1,632 people in England and Wales had died with a reference to Covid-19 on their death certificate (and even that figure only includes death certificates processed before 1 April). The government-announced daily death totals for England and Wales added up to 964 deaths by that point. That’s a gap of 668 deaths or, put another way: more than 40 per cent of the actual deaths are unaccounted for.

The problem with the ONS figures is that they take time to come through: these figures, published yesterday, tell us only about what happened up to 27 March. That’s not much use for monitoring a dynamic situation that is changing day-to-day. Moreover, the lag will eventually even out – hospital deaths which happened days or weeks ago will eventually be reported in the government figures. At the moment we are behind the curve on bad news. At some point in the future, when the spread of the disease is reversed, we will be behind the curve on good news. We will get that news eventually, just the same.

The problems I’ve referred to as “gaps” won’t be closed unless the government decides to start counting deaths in care homes and similar settings. That creates practical difficulties at a time when the world demands timely updates.

In the meantime, it would be wrong to say the government figures are useless. They aren’t. Yes, they are limited: they don’t count everything and they are intrinsically slightly out of date. But as long as we know this, and as long as they continue to count the same thing in the same limited way, they can still tell us something about the direction of travel. For a world desperate to know what’s happening right now, they are still the best source we have got.