At the start of 2018, a new skincare trend began to sweep Instagram. Rather than a serum, sheet mask, oil or cream, skincare tools were coming to the fore and none was quite as popular as the face roller. A six-inch rod with two wheels made usually of jade or quartz, face rollers were originally part of centuries-old Chinese skincare which emphasised the health benefits of “scraping” the skin with a roller or gua sha (a smooth stone) to increase circulation to the face. Face rollers began to be co-opted by trendy skincare brands in 2017, trading at roughly £25 a roller, but in some cases up to £300, and became a staple of celebrity skincare routines by the summer of 2018 – on Instagram, #jaderoller has just under 100,000 tags and #guasha has more than 140,000. They are heralded by celebrities such as Alessandra Ambrosio, Madelaine Petsch and Lily Aldridge and have become, for most Western beauty users, a household name (even if many of those households think the alleged “facelift-like results” are probably a scam).

The technical benefit of face rollers, if you want to explore the questionable science, is “lymphatic drainage”: the notion that by massaging parts of your face and neck, you will prevent your lymph nodes from getting blocked, helping them to better fight disease and prevent infection. The evidence for this, in common with most skincare trends, is largely anecdotal, but those pushing face and neck rollers claim some legitimacy through manual lymphatic drainage massage (MLD) for lymphoedema. This medical massage is for those with a specific type of tissue swelling and provides them with physical relief from the symptoms of their illness, rather than a cure.

However, wellness brands have taken note and have made MLD for the masses – with some heavily implying unsubstantiated health benefits and positioning themselves as “alternative medicine” providers. With the treatment now simply known as “lymphatic drainage massage”, beauticians are using Instagram, celebrity endorsements and fake science to turn what was once a specific medical therapy into an essential part of the modern beauty routine. And for some brands and influencers, it means selling those services (plus merchandise) for thousands of pounds to women looking for serious healthcare. 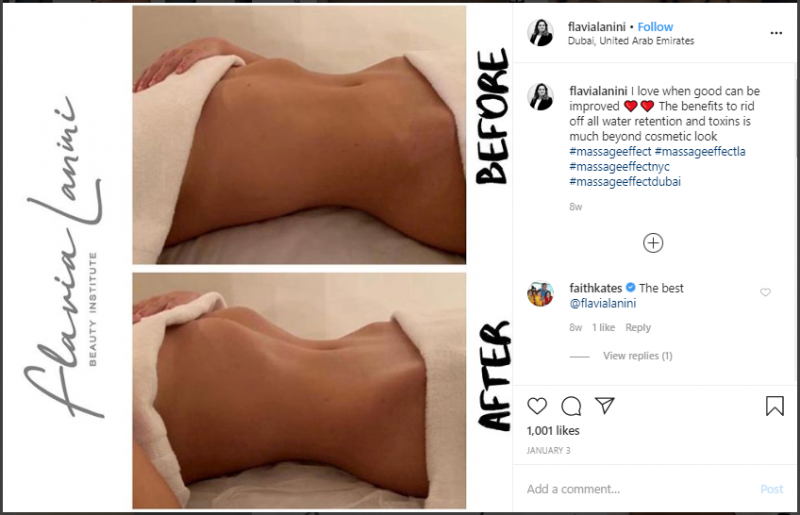 Lymphatic drainage massage has been a celebrity “freak” treatment in recent years – making headlines in publications such as Elle and the Hollywood Reporter for being the “hottest treatment” to get “toned and taut in a flash”. It’s a type of massage that, until recently, was mostly pushed for its aesthetic benefits, giving its beneficiaries sudden muscle definition while using the ever-present wellness language of “flushing toxins”, “improving circulation” and “giving you that glow”. Beauticians such as Flávia Lanini and Camila Perez have created Instagram-popular businesses out of lymphatic drainage and enjoy a host of celebrity clients, from A-list stars such as Kris Jenner and Selena Gomez, to internet celebrities such as YouTuber James Charles.

Lymphatic drainage massages, like face rollers, are comparable to many other Goop-style trends: a treatment based on practically non-existent science, co-opting something that is scientifically backed, and sold to the white, female, wealthy masses, packaged as part of a wellness routine. But some wellness brands are presenting themselves as a genuine medical service, using careful language to appear scientific without implicating themselves in any technically false claims.

The Lymphatic Message is the most notable of these brands – run by Los Angeles-based Lisa Levitt Gainsley, a certified lymphoedema therapist. On the surface, its website resembles countless other health brands with earthy tones, brightly lit pictures and a yoga studio aesthetic. It offers massage treatments, classes and events with trendy outlets such as Lululemon, and links to YouTube videos of at-home techniques for people to “to clear the lymphatic system of toxins, boost the immune system and reduce inflammation in the body”.

“Lisa utilises her 25 years of vast knowledge of the lymphatic system to address the specific needs of her clientele,” the site’s “About Me” section reads, “whether they are interested in maintaining health, reducing inflammation in their body, at risk for lymphedema, or recovering from an injury or surgery.”

While The Lymphatic Message doesn’t explicitly state that the massages it offers have cancer-related or other direct health benefits, you’d be forgiven for thinking that was the case. The homepage states that this type of massage can boost your immune system if you are “going through cancer treatment”, the FAQ section says people often seek it out after cancer diagnosis, and the first video linked to the site has Gainsley sitting down with a woman who claims the massage helped heal her chronic eczema. The “About Me” section of the website describes how Gainsley’s mother tragically died of cancer when she was just 13 and how, alongside “Western medicine treatment”, they practised “complementary medicine” in order to treat her cancer. Much of the website states that lymphatic drainage massage can prevent lymphoedema – a claim which is not apparently substantiated by any major health organisation. The main testimonial on the homepage reads “Lisa is an essential part of my cancer-fighting team.” 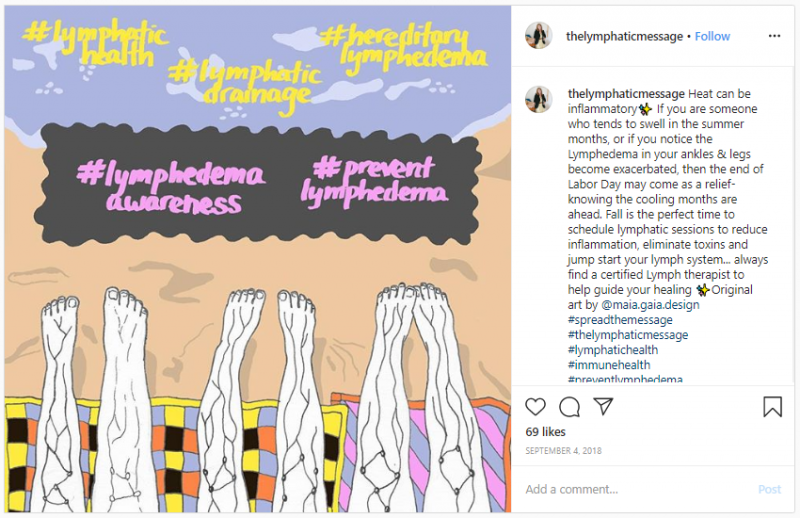 Ione De Brito-Ashurst, the head of therapies at The Royal Marsden NHS Foundation Trust tells me that this type of massage can indeed be beneficial to those experiencing cancer treatment – but that it is in no way a replacement for traditional chemotherapy and should be used with caution. “[The massage] is carried out by the lymphoedema therapy team and patients often report that it softens tissue and can improve comfort and quality of life,” she says. “[But] this treatment must always be carried out by a qualified practitioner and if a patient has active disease, medical consent should be obtained before having it.”

Of course, The Lymphatic Message encourages its clients to buy a range of products alongside their treatments – including biomats that cost $1,700, belly belts that cost $550, and a trampoline that costs $269 (which is listed under a category titled “Essentials”). And while The Royal Marsden recommends that lymphatic drainage massage only be performed by a qualified professional, Gainsley’s Instagram is littered with posts on how to personally use many of the expensive products. 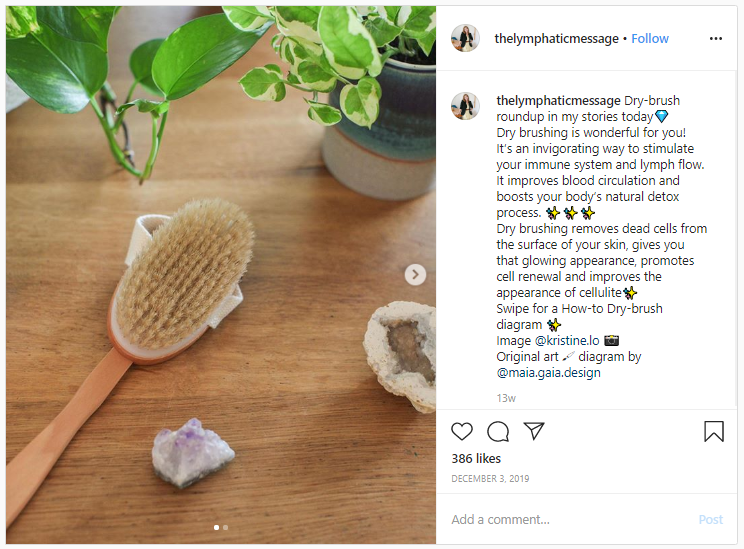 It’s unsurprising that these companies are popular. Alternative health has been on the rise for the past ten years, and has been linked to a wider crisis in undiagnosed women’s health problems – genuine ailments and physical pains that doctors can’t medically give a name to. As Imogen West-Knights wrote for the New Statesman last year, “We all like to scoff at the wellness industry, with its crystals, potions and lotions, but for those suffering from conditions the medical establishment does not yet understand, it can seem like the only option available.”

Although lymphatic drainage massage has become explosively popular in the last year, it’s likely we’re only seeing the beginning of it as a trend. An anonymous publishing source tells me that The Little Book of Lymph – the working title for Lisa Levitt Gainsley’s upcoming debut book about her methodology – was billed as one of the “hottest titles at the London Book Fair” next week before the fair was cancelled on Wednesday. Treatwell’s spokesperson also says that lymphatic drainage massage only started showing noticeable growth in March 2019, meaning we’re in the relatively early days of its shelf-life. And while lymphatic drainage massage may be more time-consuming and costly than its face-rolling predecessor, it’s pseudoscientific links may make it a long-lasting, lucrative service.